I am allergic to shrimp.  I didn’t start out that way, but it happened gradually.  I do not like this fact, as I think shrimp are quite yummy.  But, the hives really aren’t worth it.  At first it was a few hives on my face, in which case I would think “Gee, I wonder if I might be allergic to shrimp?”  And then I’d avoid it for awhile.  Eventually I’d forget the hives on the face and try again.

I went to attend my brothers wedding, and at the rehearsal dinner, I ordered a lovely pasta containing shrimp.  It was delish, and as I hadn’t had shrimp in about a year, nor much meat of any kind, I really enjoyed it!  But, in the car ride back to the hotel, I started to itch.  And then I realized I had hives, not just on my face but worse ones all over my torso.  This pretty much confirmed my suspicions about the allergy, and I’ve not had shrimp since.  It took an unforgettable case of hives to remember the allergy in the first place.  In fact, I’ve avoided all shell fish on the off chance I am allergic to other types.

J and I went out to dinner at an Italian place the other night.  Being that we both eat vegetarian, we ordered vegetarian dishes.  He had a lovely pesto tortellini, and I a whole wheat pasta with various Mediterranean themed veggies.  Both were sprinkled with roasted pine nuts which are one of our favorite things.

I noticed soon after that I had developed a headache.  We went to see Moon, which was, incidentally, an extremely well done sci fi movie which deserves a lot more attention than it is getting.  Brought up many ethical questions which we enjoyed discussing well into the next day.  (Mom, put it on your netflix).  Unfortunately, I had felt increasingly uncomfortable during the movie, but this often happens to me when wearing a pretty dress and stockings. By the time I drove home, I was grumpy and headachey, and just trying not to snap at J’s sometimes overwhelming amount of chatter.  And then I started to scratch.  I became so itchy I had a bit of a panic attack, thinking my new car was infested with some sort of bug.  But, once I got home and into shorts and t shirt, I realized that this was hives.  Hives all over my torso again!  But I had not eaten anything which could have caused this!

And boy did it knock me out! I sat on the couch while J gutted eggplants to stuff the next day.  The last thing I remember was him talking about how perhaps they had fried the pine nuts in oil that had fried shrimp.  And then I was asleep.  Sitting up, on the couch.  Then J woke me up and sent me to bed.  I, who never ever ever sleeps in, slept in until 7:30.  Then I got up for all of 15 minutes, to start some tea.  Once it was simmering, I felt like I should go back to bed.  So I did, and slept until 10!  This is without benadryl mind you!

What actually caused this reaction is somewhat of a mystery.  J thought my pasta tasted like weeds.  Maybe it wasn’t shrimp at all, but some other unknown allergen.  I’d probably be wise to carry benadryl in my purse.

In any case, I finished up all this wool top this weekend, a grand total of 830 yards. I decided to photograph it in one giant skein! 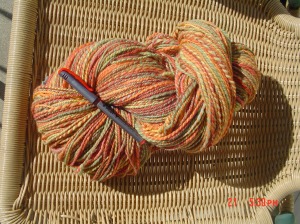 Stay tuned for some colorwork socks!