I decided yesterday I’d take a picture of a work in progress. It’s the Emergency Hat out of Marja’s handspun. 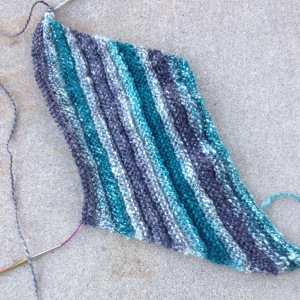 Colorway Kara from Dyeabolical. The base is BFL/Firestar, and that firestar has a ton of sparkle. It’s completely gorgeous.

I had intended to post about this yesterday after I took the picture. I was going to say that I was nervous I wouldn’t have enough yarn for the project. And while I started it on Sunday hoping to complete it on Monday, my yarn nervousness kicked in and I set it down.

But, once I took the picture, I had a quiet evening mostly to myself and I didn’t want to put the project back down in order to blog. So, the point is moot. I had enough yarn. There wasn’t a lot to spare, but I had enough. The hat is gorgeous. It’s for Marja, but it’s one I am actually going to have trouble giving over. I’ll get pics tonight to post tomorrow.