Another “Howl” just came off the needles. In other words, I knit another Emergency Hat. This one is, technically, more hat than cowl, as the hat itself barely even fits an adult.

The yarn is Marja’s handspun out of Dyeabolical’s katatomic colorway, on BFL Firestar. I used every last bit of the yarn for this one, and JUST squeaked by with a full hat. So, it’s going to go to a kiddo, either mine or Marja’s niece. 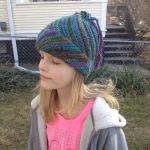 Don’t be fooled though, I am still on a mission with these hats, and already knitting another out of Marja’s handspun. A loop bump, so I’ll have a bit more to work with this time around. I am not tired of them yet!

What pattern has so captured your attention that you just knit it over and over? I need another one of these in my life!