It was so close! 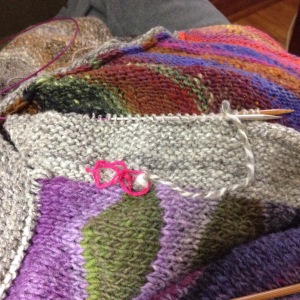 With only 30 stitches left on the needle to bind off, I ran out of yarn for the border of my Lizard Ridge. So frustrating!

Thankfully, I’d already spun two spindles of singles. Each spindle had 16 grams of yarn on them, so I flick carded 16 more grams of yarn, spun it, and plied it late last evening. 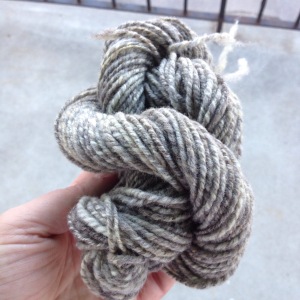 I then made a mini skein. 75 more yards of the border yarn. And with that, I can officially be done with Lizard Ridge.

I’ve been oddly lacking in angst at the end of this project. Typically, at the end of such an epic project I’d be so eager for it to be done that I’d become frustrated and start calling in the project of doom or some such nonsense, just to carry me through. With this one? I just never had that feeling. All I had was a zen contentment with it, despite numerous setbacks. I do hope that means I’ll have a finished object with no negative memories attached to it!