I started a new shawlette. It’s one where I build on rectangles. I am using my Smaug batt/braid 2 ply. 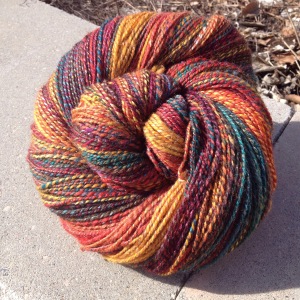 It’s a bit of brain work for me to wrap my head around how it’s supposed to be constructed, but at the moment I seem to have the hang of it. The colors are changing a bit slower than I had hoped for, at least during the initial rectangles, but that might not always be the case as a knit along.

The rectangles are getting larger so it stands to reason the color changes will be faster as well.

In garden news, my day lillies are now in full bloom, and almost as tall as I am!

It’s been a fairly mellow weekend, one in which I am getting quite a bit of housework done. This pleases me greatly! We also rode from our house down to the river to see a local band. The weather forecast was unusual, 0% chance of rain all day long. 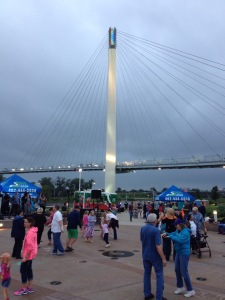 Yeah. It rained. But it was a fabulous ride and a fabulous evening anyhow.

For the record, we are on day 9 no AC. But, the weather is sitting at 10-15 degrees cooler than it had been during the worst of last week. So, we are surviving with not quite as much irritability on my part. I still refuse to let anyone do a load of laundry or turn on the oven though. Let’s not get carried away!