It’s hot, and we have less than a week to finish the old house clean out. Unfortunately, we are also at a point where it’s REALLY hard to stay motivated. We will be working on the clean out every single evening this week, and I am afraid you, dear readers, are stuck with my updates.

Monday night I started working on one of the (now grown up) kid’s rooms. He moved out, left all his stuff, and did not come back to claim it. And will not be coming back to claim it. Thus, I was forced to sort. Since there is no longer a washer and dryer, they were sold weeks ago, and most everything is not worth donating, I did a lot of trashing. Once I got the stuff out of there, including the furniture, all of which is too torn and beat up to donate, I was forced to deal with the floor. It was so bad that I used a broom on the carpet to get rid of the big stuff before I tackled it with a vacuum. And that’s when the real fun began. The floor was absolutely covered in these:

I am not entirely sure what they are, maybe BBs? They were everywhere, and so buried in the carpet as to not be visible. But, the vacuum cannot pick them up. So, the solution is to vacuum a section of carpet, listening to the raucous of the BBs skittering around in there, stop the vacuum, give it a good shake, and then pick up the pile of BBs. That was a fun job.

But, by the time last evening was done, both the kids rooms had been cleared of cobwebs, dusted, and vacuumed. Any more deep cleaning that will be done can be done after the sorting is done in the rest of the house. However, they are ready for some carpet cleaner love.

We set trash out, and in two evenings, this is what we had.

Recycling. JUST paper and cardboard. There’s loads more, but this is what I was able to get sorted.

Yard waste. There’s an entire pile of brush out back that needs to be cut and made into bundles, but this was a real decent start. Mr. Ink plans on doing some more of that work this evening. 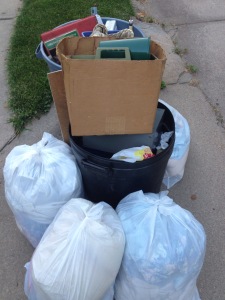 Trash. That’s two full large bins, and 4 bags. I had another bag full, but Mr. Ink told me not to put it out since we are technically only allowed to put out 5 at a time. We were already over the limit.

We also were able to get 2 garage shelving units and a large garage cabinet over to the new place in the last two days. This was necessary, and even more importantly, it frees up additional space.

We have 4 work benches that have been sold, and the buyer will pick them up tonight. We’ve had bites on some other furniture that needs to move as well. The more that goes without us having to move it, the better.

I also rented a dumpster for the weekend, so we can really hit it hard during the final push to finish.

So, this is why there hasn’t been a ton of spinning progress. We are way too involved in other stuff, but the final push does mean that we won’t be spending a couple days at the old house on the regular, which will be so entirely freeing!

Doesn’t look that different from yesterday, but I swear there’s another layer of singles on there. I did also get more on a spindle, and I’ll do the same at lunchtime today.

4 thoughts on “The Great Clean Out, and a TdF update”