This hat is actually for me, but I had Miss Bug model it because she’s a convenient model. 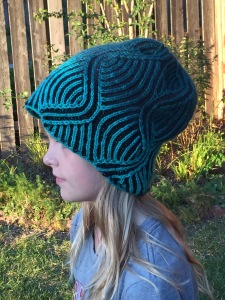 It’s reversible! I knit this out of my handspun, a loop bump. I just started from both ends of the bump. I didn’t get through as many colors as I had hoped, I’ve probably got enough for another hat, to be honest. Though I might choose fingerless mitts or something instead.

I had a bit of trouble with this hat, and started the decreases way before they were supposed to be started. Which then made it so that I had to rip back, but ripping back brioche stitch isn’t that easy. I got smart, and put the hat down for a couple days, which mitigated my frustration. I really believed I’d need to rip the entire thing out and start over! I was willing to do so because I really did like the hat.

Thankfully that wasn’t necessary in the end, though I had to rip back farther than I wanted to.

This week’s fun thing…I did something I haven’t done in more than 20 years. We went roller skating!

I used to be able to skate very very well as a teenager, but I was quite nervous it wouldn’t all come back to me. The first few moments were sketchy. And then I got faster and faster, and by the end of the evening my crossover turns had come back to me. I still won’t spin myself around, go backwards, or do twirls. BUT, I’d say for one night, that was good progress. Now I want a pair of rollerskates for christmas, so that maybe I can not be nursing two huge blisters from rental skates. Because most of us who went last evening agree that we must do this on the regular.

One thought on “Beezee Hat”