I had to work all Spinday at it, not getting even a small chance for spinning, but the tile is now completely off the bathroom shower/tub area. 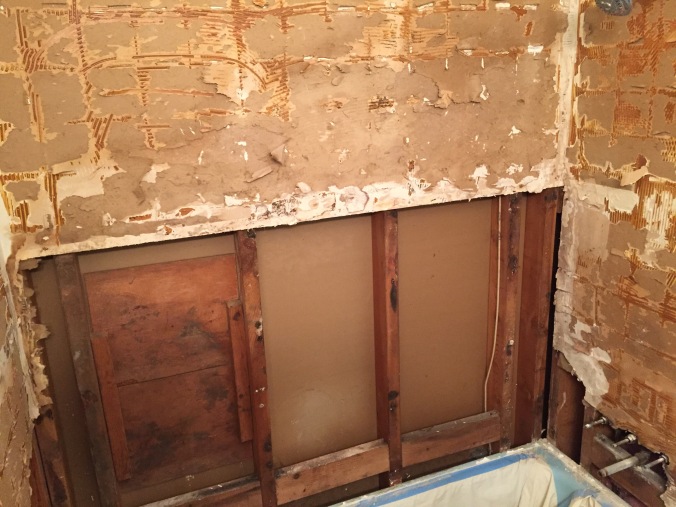 I yanked out the worst “wetwall” board right away. And then kept after all the tile. As I got to portions where the back was less water damaged, those tiles became far more difficult to remove. It took a lot of time and energy, and I had to use a hammer to force my scraper behind each one. I lost a few in the process, but since I only need about half, that was ok.

Mr. Ink was worried I would be too eager to take down the walls all the way to the studs before even knowing what the damage was. So, I tried to evaluate carefully what the wallboard damage actually was, even though I really preferred the idea of a clean working surface, taking the entire thing down to the studs. Well, as it turns out, that was a job for Mr. Ink, I couldn’t easily get the wallboard removed, and as soon as he came in, he said “Are you sure you want to leave any? Seems like it might be best to remove it all so we can be sure we won’t suffer this type of damage again!” To which I said “Yes, yes, that is what I want!” And it was done.

Last evening I sprayed mold and mildew remover on those studs, as even though they are in fine shape, they were a little damp when I removed the wallboard. They’ve had a good deal of time to dry out, and they’ll have all day today as well. Then, tonight, I hope to get the cement board up.

Miss Butterfly and I have today off. We carefully chose the best of the blue tiles and our plan today is to scrape them carefully to make sure they are ready to be put back on the wall. It was a tough search actually, as we had to inspect each tile for damage to the front, and many of the tiles were moldy, with the backs cracking and mold infused into those tiny cracks. I just do not want to use those!

Mr. Ink and I have found a very nice way for me to do home improvement projects, it works for us both. I envision what I’d like to do. Then, I tell him what I want to do, and let him think on it. Then he presents me with further information and ideas. I think on that for awhile. Then I gather my tools and start my project. I leave him out of it completely until I actually find something I cannot physically do or figure out. Then he steps in and gives a hand. This is working very well for  us, as I like my projects to be “mine” and this way I always get that sense of satisfaction of being the lead on it.

It must be working for him as well, because he’s no longer balking at the idea of me taking on more projects. 🙂