There haven’t been a ton of opportunities for progress pictures in the crafting department, as Miss Butterfly had her first ever show choir performance last evening.

Show choir requires that the girls all have the same hair, make up, and outfits. Thankfully, at this point, the school provides the outfits. We just have to manage hair and make up. So, I went to work early so I could leave early in order to get everything done that needed done before I needed to deliver her to the school for district vocal festival.

We did fairly well, but at 5:50 we discovered we had a pantyhose emergency, and she had to be out of the house at 6:10. We had to send Mr. Ink out after he’d JUST walked in the door for a pair of pantyhose that actually fit, the ones I had picked up were WAY too small. Apparently she’s in adult sizes now.

AND I had to do hair 3 times to get it “right.” But I had just finished hair and make up when Mr. Ink walked back in the door. We were only 5 minutes late. I’ll call that a win.

Of course, since we were running behind, I was unable to get any pictures ahead of time. But I did snap two photos after it was all over. 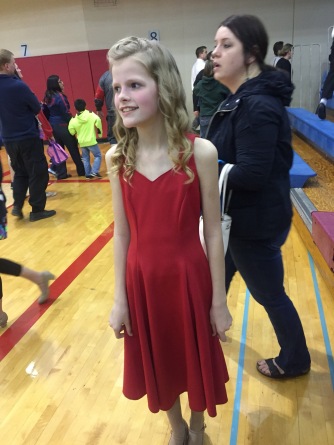 Her group was the youngest show choir there, but we also got to see the middle school and high school show choirs perform. They also did very well. The middle school choir has been coming in 3rd place at local competitions, but I think that Miss Butterfly’s choir was actually better than middle school, as far as singing is concerned. It’ll be interesting to see how her group progresses.

But, one of the most encouraging things to see what how the older show choirs supported the youngest group. They clapped, they cheered, they gave standing ovations, and even as we were leaving and Butterfly was in the car, the older show choir girls were still giving her thumbs up signs. That school district is clearly fostering a culture of encouragement in its music department, and that, as a parent, is wonderful to see! She’ll be in good hands in the coming years. And *I* will be extremely busy.

I did grab a quick snap shot peek at some upcoming projects. Meaning, over the last couple weeks I’ve been purchasing various fillers and add ins for drum carding batts. I love drum carding, and I am eager to do more in the future. And I love spinning from batts more than anything else. So, I decided it was time to start collecting more fillers. Here’s the first batch to come in. 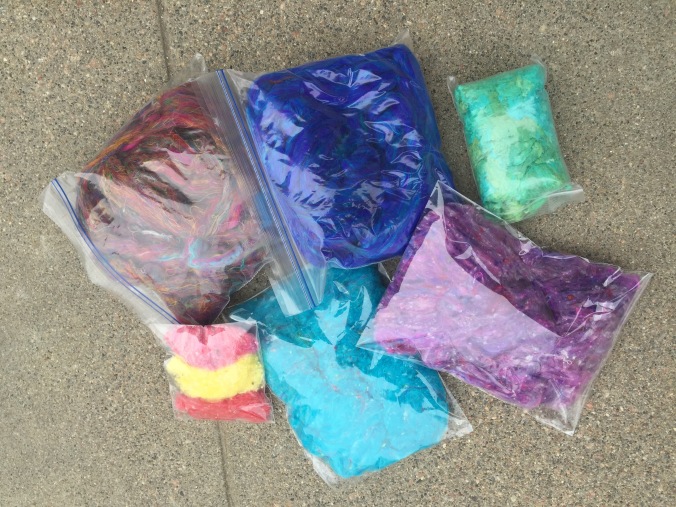 That’s two pulled sari silk rovings and a bunch of silk noil. I’ll keep posting the fun stuff I get in the mail in the upcoming weeks. I’ve ordered stuff that will baffle even me!