Guys, I can’t show you knitting or spinning! Because precious little of it was done this weekend. We absolutely adore our home, and the yard is our passion, and as such, we spent the entire 3 day weekend out of doors, when it was not raining.

Mr. Ink finished planting his tree, and I forgot to get a picture of it finished. But, here it is in it’s spot, with Mr. Ink still crumbling clay like dirt to fill the hole back in. His hands hurt for days after that project.

We started out with absolutely no trees in our yard. Well, we had a rose of sharon that was tree like. But no other trees. We now have 6 I think? And more being shipped to our home.

On Saturday, we went out and purchased 13 boards, 14 feet in length, to fix our basketweave fence. 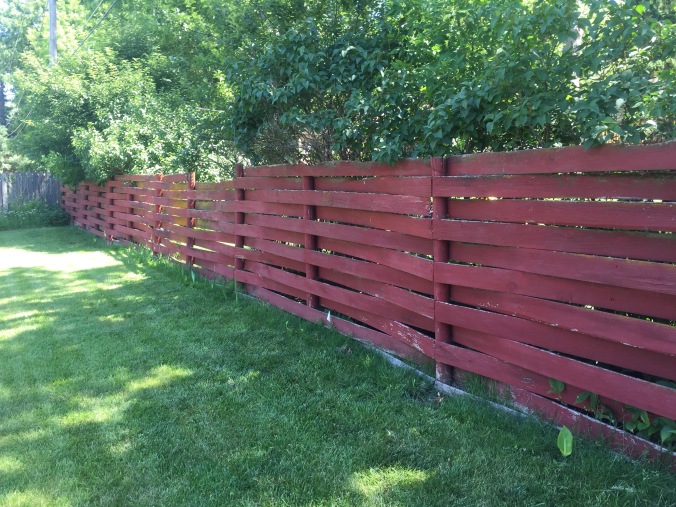 Some of the boards were rotting, or had broken, and it was time to make it look a little nicer. Or at least not have it in a situation where it would just come apart. The neighbors have dogs, and have been just pinning unstained lumber to the areas which were falling apart, and that didn’t please my eye at all, so I figured I’d prefer to fix it well, and that would also be a neighborly action.

On Sunday morning, I set out to stain the boards. Thankfully, a nice can of redwood stain was left in the house when we moved in, so I just used that.

Staining 13 long bards takes up a lot more time than I expected! It really did take me all day. Meanwhile, Mr. Ink had headed down for a simple job, trimming back the bushes on our bank so that I could see when trying to pull out onto our busy street. Well, this would not be the first time that we’ve found quite a surprise when trying to do some simple task. Mr. Ink has been carefully cultivating some lamb’s ear as ground cover, since it’s a much nicer look than dandelions. This year they are beautifully abundant, but they are also as tall as the bushes that he went to cut back. So he decided he’d better move them, and that’s when he realized that they were growing in a very thin layer of dirt that had built up over time on top of flat rocks that had been used in the landscaping. He then realized that under the rocks was a layer of landscaping fabric. So, the simple task of using a hedge trimmer on some bushes, turned into what he calls “a marathon of backbreaking labor.”

So, now he has spent all day on this, which is why I spent all day staining boards. (I’d really rather the boards, than the digging down by the road, I admit.)

On Monday, the day dawned hot and muggy! So muggy it was that kind of hard to breathe weather. But, it was also fix the fence day. Mr. Ink got outdoors before I did and started spraypainting an “x” on the boards he could immediately see needed to be removed. Then I went out, and showed him other boards that we’d inventoried earlier that needed to be removed. And already, we had more than 13 “x’s” on boards. Once we started pulling boards out, we found even more boards needing to be replaced.

We looked at our 13 boards, and looked at the mess we made, and realized that there was no way to finish the job that day. So, we made the decision to work from the ground up, thus staying neighborly in keeping the neighbor’s dog safely contained. Mr Ink even insisted on digging up the old boards which were halfway covered in ground due to years and years of erosion, and replacing them as well.

Here he is laughing because he’s just stated that yet again, we’d gotten ourselves into a project that was a marathon, as he’s digging out a trench to place a new board halfway underground.

I don’t have a finished fence picture, because it is NOT finished. However, there aren’t any gaps either, we just have top boards to put up now. Hopefully I can get the boards purchased and stained this week. Thankfully, while I thought the new boards would be ridiculously obvious, they aren’t. Your eye does sort of skim over the basket weave, and since it’s all one color you don’t make too much of a fuss about the new boards. That’s great, because I was really anticipating I’d want to replace the entire thing immediately after finishing the repair. But, maybe just a bit at a time is better.

The one thing we hadn’t realized is that the neighbor’s side of the fence is NOT stained. So, now the neighbor will have 20 red boards, and the rest just weathered. But, I did tell the neighbor I’d continue staining them on both sides, and eventually he will have a stained fence.

In any case, it was a great excuse to get to know our neighbor a bit. We’ve lived there over a year now, but this is the first time I spoke to him for any length of time. It’s clear they’ve been silently paying attention, there was much talk of my spinning on the patio, which I haven’t actually done for awhile. Mr. Ink and I decided that in interest of good neighborly interactions, we are going to start helping him mow the access area out the back of our garage. Since we use it regularly, it doesn’t seem fair that he’s the one who mows it by himself. He didn’t ask, but it’s the right thing to do and I know he won’t mind either.

All in all a terribly productive and busy weekend. I feel tired, but fresh like the outdoors, and happy, and a little bit sunburned!