I got a lot of spinning done last night, but very little to show for it as of right now. I finished plying my loop cloud, but was unable to get that in a skein and washed last evening. I also plied some other singles I had, but couldn’t get those in a skein either. I did, however, leave those on bobbins for later and start a new TdF project!

One of the loop challenges is to pair 2 different bumps. I chose these two: 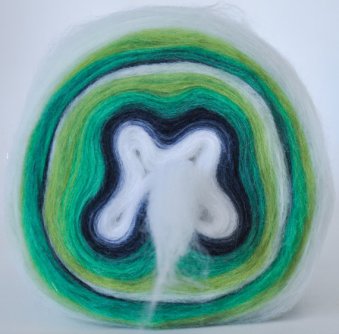 And…it’s looking great! I am spinning it from the outside in, and as with all loop bumps, it is awesome, and feels so easy to spin up quickly.

We had another hot day. Technically hotter than Tuesday, but it wasn’t quite as humid. I was outdoors watering plants quite late last night, only to have a HUGE storm roll through and soak everything early this morning. I am not complaining! I just could have saved myself a little time.

I also went to pick up a load of plants from a friend who divided her very well established and beautiful garden. I came home with bee’s balm, phlox, irises, day lilies, coreopsis, and some ground cover I don’t know the name of. She warned me that she could fill my garden. It’s true. There’s 4 laundry baskets full of plants on my patio right now!

That means, this evening will be devoted entirely to digging and planting. It’s going to be over 90 again. On the plus side, it looks like a storm may roll through around the time I’d be digging, if that’s the case, it’ll probably be welcome, and bring in some cooler air.

As for the current plants update, I’ve got two cannas that should bloom fairly soon, two gladiolus that are about to bloom, 2 caladium finally making an appearance, and 2 tuberous begonias that probably won’t flower this year, but are finally slightly above the ground.

(I suspect it may have been accidentally sprayed with round up by Mr. Ink on a windy day. I tried to tell him that, he told me it was the crazy weather. I don’t believe him, since it was doing GREAT until the round up was sprayed. Plus, that round up ALSO got on my pink rose and killed a section of it. I guess, in the end, I don’t need him to believe me. I just need him to be more careful, knowing I’ll accuse him if he doesn’t cover them!)

In any case! Lot’s of gardening goings on, I’ll hopefully get some pictures tonight to post tomorrow. And maybe my spinning will have time to dry!