Oh man, did we ever have a day of it in the garden. I’ll tell you what, it was hot. But not the type of hot that means we’d need to do sprinkler gardening. Let me show you what happened out there yesterday! Actually, it’s a project we started on Friday and continued yesterday. A very long and difficult project, and we aren’t done yet.

This is my rose of sharon garden:

I didn’t get before pictures, naturally. but, all that dirt in front? We dug two to three feet down all the way around the front and sifted through the dirt for weeds and junk. Prior to this, the garden was edged with those cement scalloped edgers. But, they weren’t curved, just straight, even though the garden is curved. And then all along the front was yarrow, and the yarrow was so well established, it had pushed the edgers over almost onto their sides, so that the yarrow, and the weeds, could spill out onto the lawn. Did I mention the weeds? I don’t think I did. The yarrow perfectly hid weeds, henbit and paper mulberries.

Mr. Ink has been hoping to “nuke” this garden for awhile, but I didn’t let him initially. There were also 3 peonies in there, and there’s a rose bush in front of the rose of sharon, and I really loved the irises. Well, we have enough peonies, and the rose keeps growing taller than the rose of sharon, so I want to move that, and I can’t see the irises for the yarrow, and the weeds would NEVER go away and the edgers annoyed me and all of that led to the perfect storm where I agreed it was time to “nuke” the garden.

We dug out the peonies, they were probably put in when the home was built. Their roots were the thickness of my arm. We also found paper mulberry stumps and roots under the ground, those too were the thickness of my arm. Mr. Ink pulled them out, and followed those roots to the edges of our fences to cut them out. Digging deep and sifting, we hypothesize, will keep that irritating weed population down. Once all the dirt was dug and sifted, and the edgers removed, I put the irises that I’d removed for the dirt sifting project back in, along with two other iris varieties from my friend who donated parts of her garden to us. I also added some very nice coreopsis along the fenceline. We still have to move the rose, but Mr. Ink’s back had been completely done in by the digging and sifting, so we have saved it for today.

Today I would also like to edge this garden with the nice stone that matches the new wall and garden. I have plenty, we haven’t gotten any farther with that project. Then once the rose is moved, we are going to mulch the heck out of it.

Mr. Ink decided to work on his garden too, do you remember this photo?

Those 3 trees that Mr. Ink planted started to annoy me when mowing. So, I told Mr. Ink he’d better remove the sod and make it so I only had to go around them once, or I’d go on a mowing strike. Since our property is fairly large, this would make a lot of extra work for him. So, he dug out the sod in the middle, and decided he’d call that “his” garden. He’s going to be working in shades of purple.

He had his eye on some spiderwort that was well established in another garden area that I don’t show off. (I know, we are flush with garden space and we keep making more!) But, he couldn’t for the life of him get that spiderwort out. That garden had the same wood edgers that my new rock wall garden had, and I hate them. So, naturally, my solution to every problem is “Destroy!” I told him we should just take out the wooden edgers/wall, and his spiderwort would come right out. I was right, and we are left with this mess. 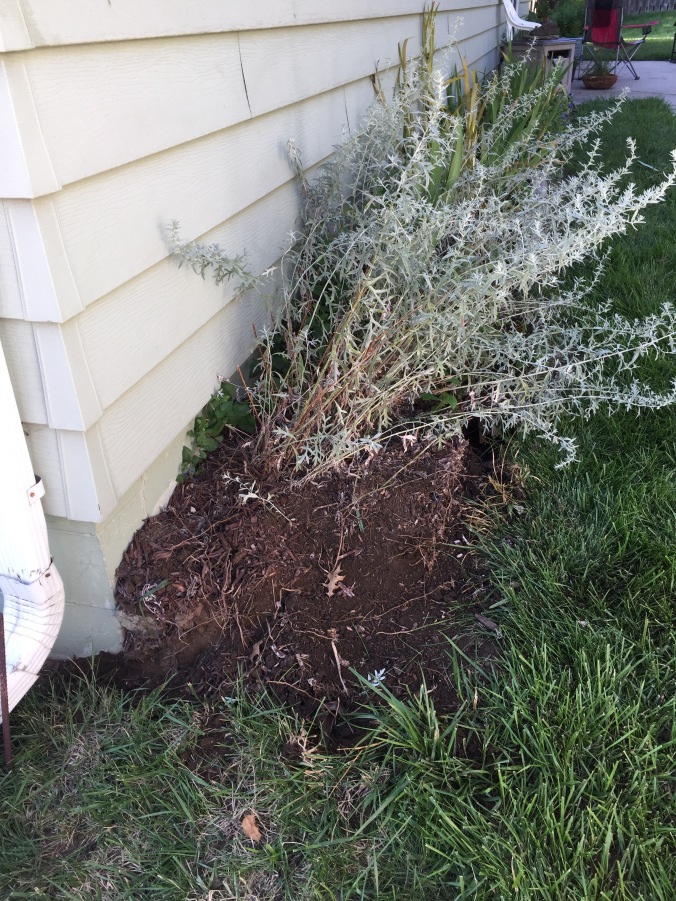 It’s ok though, I really don’t think that area needs a wall anyhow, we can just add our pretty rock edgers, and it’ll match what’s up the hill.

Mr. Ink planted the spiderwort and all his collected balloon flowers in “his” garden. He’s also decided to steal the allium bulbs I had ordered for fall planting. (I don’t mind.) His garden should look quite nice, and be far less of a mishmash than mine.

He also gave me a couple of spiderwort plugs, since it desperately needed to be divided, so I planted those up by my freshly sifted garden. Mr. Ink’s garden needs a good mulching as well.

Guys? Despite all this insanity, and it TRULY was an all day project, I got some spinning done! Look where I am now! 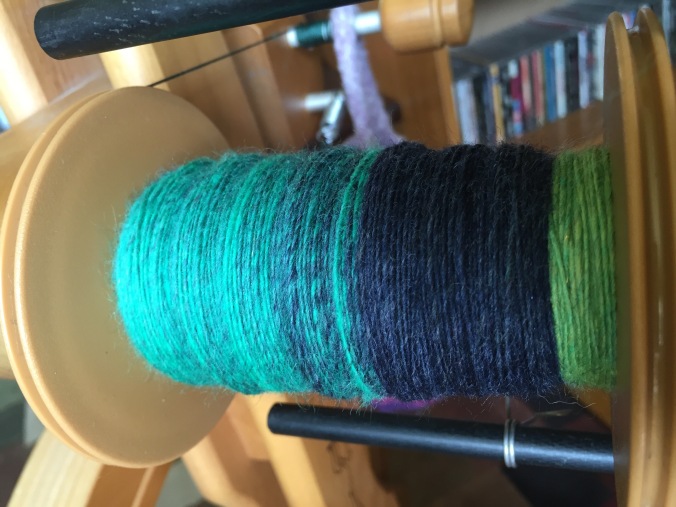 And, then, this morning’s view of the garden? My first caladium leaf has unfurled. I’ve been tending these bulbs very carefully, so eager to see them grow. I planted 10, only 3 are above ground, and I’ve lost hope on the rest. But check this out!

As you can see, the main one should be opening shortly. but I am so thrilled just to see this one! And, I can’t wait to see what variety of the other two I got, as I bought a mix. I am hoping for something different, but I won’t be disappointed if they are all like this.

Until tomorrow, where I’ll hopefully have more great pictures for you…