As has been requested by our friend Salpal1 at Whatimuptotoday, I am going to take you on a virtual tour of the back yard at my place.

But first, we’ll look at some spinning. I finished my first loop! bump for the tour! And then I immediately started on the coordinating bump I purchased to go with it.

That feels like some fantastic progress! And, I am enjoying spinning my loop up, as it really is some of my favorite spinning fiber.

Now for the tour. I can’t do the entire property at once, so I am starting with the back yard. It’s funny, I got home last night and mowed. Then, I worried about taking pictures. Mr. Ink wasn’t home yet, so he couldn’t trim, and what if it looked sloppy, and what if people notice how NOT done the gardens are? (Well, DUH, they aren’t done, and I’ve never claimed they were!) And what if you notice that we don’t have decent patio furniture yet? Or that there are still plants hanging around waiting to be planted? And then I started taking pictures, and realized you can see so little of it anyhow in a photo, it really does NOT matter.

So, now for the tour. I stepped out the back door and onto my patio for this, and then I turned to the left. I’ll start at the left of the yard and move all the way to the right.

You can easily see the wooden edgers that I am slowly removing in this photo to the left. That bed used to be full of irises, well established, but I ripped them all out. There were just too many. The bed was a mess, the irises were growing under the wood edger, they weren’t producing well at all, and I started by thinning them, then as is typical for me, I got a wild hare to just rip them all out, and that’s what I did. After that, Mr. Ink kindly sifted through the dirt, removing anything unwanted, and there it’s sat, mostly, since then, not even mulched. I planted some tuberous begonias in there, only one has made an appearance. I planted some caladium in there, 3 of which are beginning. When we worked on the rock wall, I needed to move my lady’s mantle, so it’s in there, as well as some of the plants from our recent huge plant acquisition from a friend. But, the ones I put in there were in pretty bad shape. Bee balm, phlox, and something I couldn’t identify. No telling if they’ll come back next year or not.

Above that you can see my rudbeckia garden. It’s got some phlox as well, and those ridiculous lilies that are too tall. It’s slated for a major overhaul as well. But, I haven’t gotten there yet. One thing at a time, I keep telling myself. As your eyes move to the middle of the photo, there are two small black lace elderberry bushes that Mr. Ink planted, along with an evergreen of some type. And to the right, the rose of sharon garden that we majorly overhauled. That’s it for there, let’s keep moving!

Now you can see the rose of sharon garden to the left, and the red fence we spent so many hours fixing this year. Along that fenceline are cannas, dahlias, and gladioli. They are literally just in the ground, with grass growing all around them. Because I didn’t think we’d be this far along on the gardens this year, and I just wanted them to grow. But, long term plan, that entire fenceline with be garden, lined by those lovely rocks we’ve been putting in. It’ll be a nice curved swoopy bed. There’ll be a tree up there somewhere too. Mr. Ink has it on order, it should arrive soon.

Want a close up of glads and cannas? 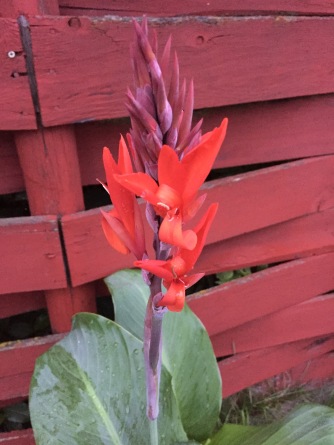 I snapped these shots this morning after a nighttime rain. I am curious to find out if I get ANYTHING other than red cannas and yellow glads! 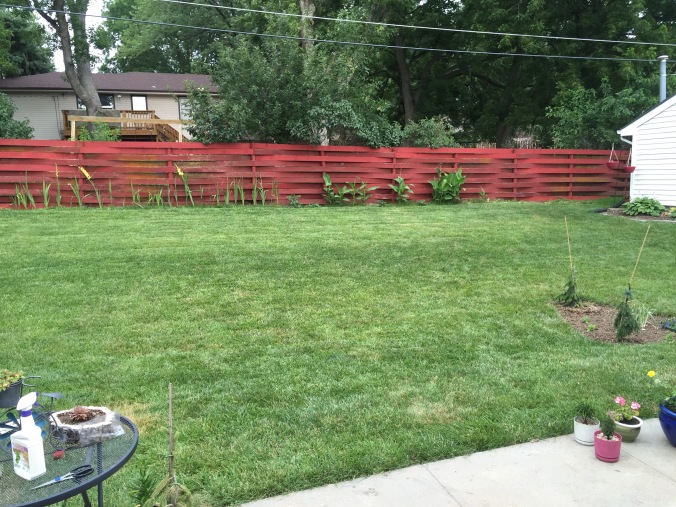 I’ve turned to my right a little more in this photo, more glads and cannas by the fence, and then you can see the edge of the big garage. (I am going to start calling it Mr. Ink’s shop, because the reality is that we get confused when we say the word garage. Neither of us knows which one we are talking about.) There’s a gap between the garage and the fence that gives us access to the area that was to be a street, leaving us a place to walk to a quieter street since the one we are on is so busy. In front of the shop is the corner of the garden with the wall Mr. Ink did earlier this year. Next step? Bring that garden edge all the way up and get it moving along the red fence. There’ll be a boulder, flat on the bottom, set into the ground where you can walk through to the back access, with more garden space in the back. I’d like to move my hostas there. 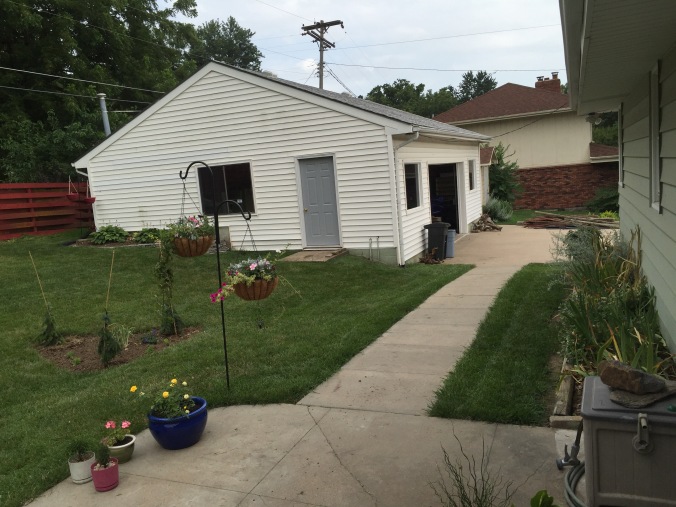 And now I’ve turned all the way to the right. You can see the shop, Mr. Ink’s garden of trees and purple flowers (not done yet, but he thinks he might get it done tonight) and behind that the garden with the wall we worked so hard on earlier. My hibiscus is going to the left of that grey garage door. To the right of the door, where the gas and electric lines are, we are going to build that up with a small walled garden, and probably just throw one big hosta in there. That shouldn’t harm the lines, and should keep them nicely covered. Then, along the house is the iris bed. Or, the bed that we destroyed trying to get to the spiderwort. It, too, has those wooden edgers, though we did take a bunch of them out already. Actually, if you look all the way back to the side of the shop you’ll see a pile of wood from the fence project and the garden projects. We need to take a load to the dump, but EVERY time I want to, I realize we just have more to pull out and add to that pile!

So now I am walking back to red fence, standing in the middle, and taking two photos. To the right: 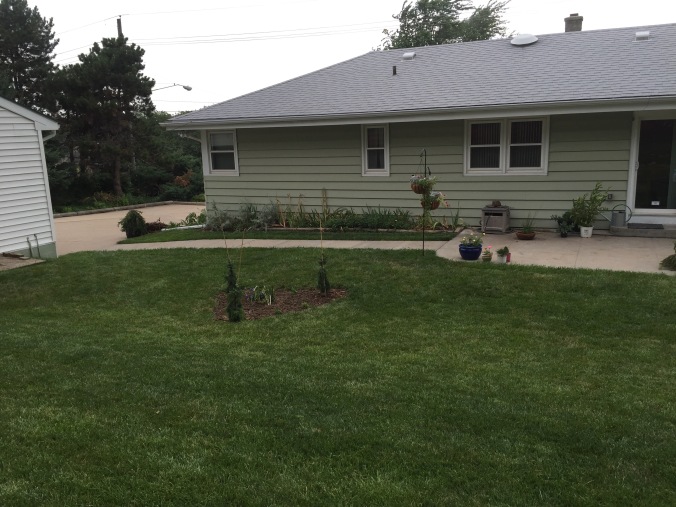 You can see our parking lot. If you live on a busy street, you NEED a parking lot. On that side of the house is my veggie garden. Or, what will become my veggie garden once I get ALL the flowers moved. That’s a picture for another day. Then, again, that’s the iris bed of wooden edger destruction. It was a raised bed on the corner of the house, but I don’t see any real need for that. I think I’ll just edge it in and call it good. That’s also the bed my new viburnum is going in.

And to the left: 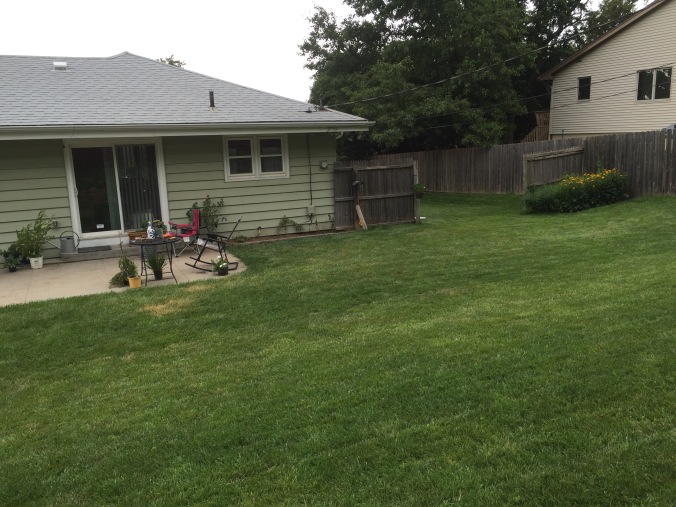 Let’s move on to the side of the house, behind that fence gap, shall we? After that, the tour is over, I am saving the rest for another day. 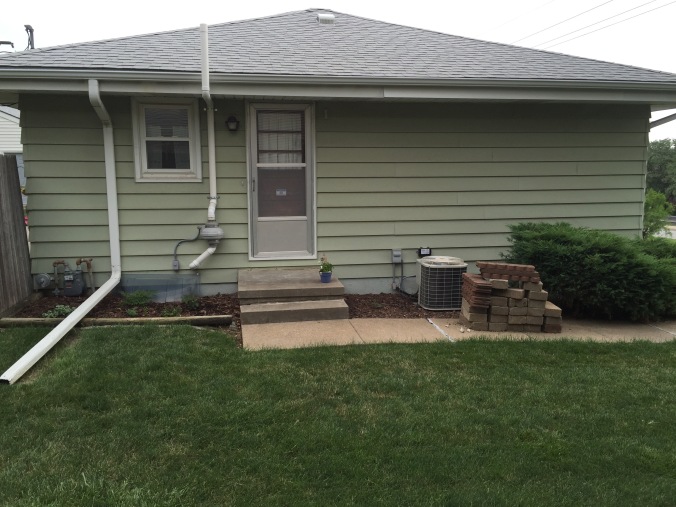 Just one photo here. This area needs a TON of work. The junipers to the right are beautiful and well established, they are staying. I have put a few plants in on the left, some astilbe, some sweet woodruff, and some lamium. It did very poorly until I did two things. First, I dug down deep enough to realize that landscaping cloth had been laid down, double thick, and then dirt poured over top. The roots just couldn’t grow properly. I moved the dirt and mulch, and cut out the cloth. Second, I amended the soil with a huge dose of manure. After the slow start, they are doing much better, but still much work is to be done. On the right side of the stoop, there’s a bleeding heart. I probably have to find a new place for it. It’s doing so poorly, and the pill bugs keep eating it. It can’t catch a break!

And, I guess you can also now see the stack of edgers and bricks we keep tearing out of everywhere! Mr. Ink has plans for a firepit, and wants to use the bricks in it. Those scalloped edgers are going to replace the wooden ones around my veggie garden, where I really don’t need pretty, I just need functional.

That’s it for today, I’ll have to take you around front another day. Mr Ink and I were sitting having a beer on the patio after some yard work the other day. I said “I really didn’t imagine I’d do this much gardening at this place. Honestly? I thought it was just fine. Then, all the pretty flowers started coming up, and I kept thinking I wanted more, and more, and then suddenly I was a gardener!” Mr. Ink said “Really?!?! Because when we looked at this house, I immediately thought that I could do so much better! And that’s why I garden!”

Mr. Ink looked at this place like it was a blank canvas he could paint on. I looked at it just knowing I could already live with it. Two people, coming at this yard from very different angles, meeting in the middle for a hobby they both absolutely love.