Since I didn’t have time to blog yesterday, here’s my Loop! bump spinning over the past two days.

This bump has far more subtle color shifts, so subtle that I didn’t even know I was into a new color until I took the wheel outside.

As for the gardens tour, I had a lot of trouble convincing myself to take these next photos. Maybe in part because I am far less happy with the front of the yard than I am with the back of the yard. Maybe that has something to do with the front being mostly Mr. Ink’s territory, and I keep requesting he work on my gardens.  Maybe because the projects out front are just SO big.

Let’s start with the side of the house you’ve already seen.

That’s Coco’s memorial tree, that I edged this spring. It’s doubled in size since we dug up the dirt, added new, and edged it nicely. Those petunias I just grabbed from other areas of the yard did really well too. I have some fall planting bulbs coming in for this area, I am thinking crocuses and hyacinths for spring beauty and color. You can also see the front of the house, but here’s a shot of the front without a tree in the way:

To the left, Mr. Ink’s new trees. The large on being the bald cypress that we just found bag worms on, and 3 other tiny evergreens that should grow, give us some privacy, and cut down on the sound of the busy road. BUT, they should not grow so high as to remove our fantastic sunset view from the front window.

Right in front of the house there, what looks like bushes are sedum. I took one on the corner out this spring, because I really do NOT like them. Maybe one or two, but we’ve got all of those, and then we’ve got more on a picture I’ll show you in a bit. PLUS, I keep digging them out of the back yard too. I had really hoped that I would be able to plant other stuff with that sedum, but the ground is SUPER poor in there. Probably why there’s just a bunch of sedum there.

Now I’ll take you around to the other side of the house, where the shop and parking lot is.

This mess is/will be my veggie garden. In the middle is an insanely huge peony. Like woah. I’ve never seen one quite that big. It also was packed full of orange day lilies, the ditch lily variety. I’ve been digging them out regularly ever since we moved in, and I now just call them weeds. I don’t even attempt to save them anymore. But, there have been other lovely day lilies that I’ve rescued and moved. Basically, I move a couple flowering plants per day, if it’s a gardening day. I am waiting to move the peonies ’till the fall, because they really are a beautiful color. That burning bush to the front simultaneously drives me nuts and I appreciate for the privacy it gives me. There’s an evergreen in front of it, so maybe someday I won’t need that bush. In the meantime, we need to cut it back again. It’s already out of control again, and there’s a bunch more of them coming up to the back of it. In the fall, we are hoping to dig up ALL the dirt like we did with the rose of sharon garden, sifting through everything, and making it nice and clear for spring gardening. Also, those edgers are going in the near future, as I’ve mentioned before, I’ll replace them with those scalloped edgers, because functionality comes before beauty when it comes to my veggie garden.

Now, here’s a shot of the other side of the shop.

All along this side of the shop are peonies. It’s why I don’t ever feel an overwhelming need to save peonies in other areas. I keep saying I am going to properly deadhead these to make them look less sloppy for the remainder of the year, but the reality is, we don’t get out here that often. So it doesn’t end up being a priority. We also have two elderberry bushes we got for free at work, they came as bare root plants, and are doing GREAT! They are at the back, and hard to see.

Again, the front of the house. This is the retaining wall, from standing at the bottom of the driveway. The top part, up by the house was the area that Mr. Ink cleared out earlier this year. I’d asked him to spray the house, since I’d noticed some ants in the living room, and that triggered him doing a massive clean up of that wall. It looks amazing now. To the left of the stairs is a bit of a mess. We have been working on it regularly. Those bush like things? 4 more sedum driving me nuts. Above that? Weeds, weeds, weeds. We’ve been trying to nuke that area from space. We are STILL working on it. Mr. Ink wants to put some pretty boulders up there since we can’t seem to get it to clear out properly. The stuff hanging off the rocks is all rock allysum, which is WONDERFUL. I love that stuff so much, it just grows like mad and the overwhelming yellow in the spring is so pretty! We’ve also got a ton of ground cover type sedum growing on that wall, which is also very welcome as it looks great, and is highly stable. There are a few other things, some creeping phlox, some pretty grasses, but mostly it’s allysum and sedum, and then a bunch of true geranium down by the street.

There are just a few more pictures to take for this tour of our yard and garden, namely the big hills on the front. But, due to the busy streets, I am going to wait until Saturday morning to run out into the road.

In the meantime, some close ups of Mr. Ink’s little garden out back? He’s finished. He planted spiderwort, allium, and balloon flowers of various types. And it’s all mulched in. 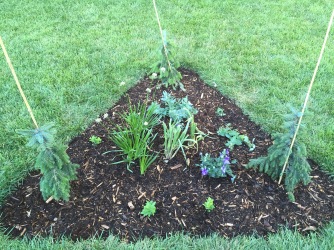 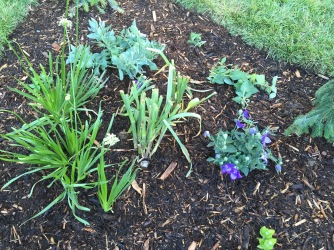 I think it’ll look pretty darn good once those balloon flowers really grow and the spiderwort comes back. We had to chop it, it was too tall to keep when we replanted it.

And…I’ve got some lovely caladium! I planted 10 bulbs, most of them were pretty slow to start. As of this morning, I’ve got 6 coming up. So, I’ve got some high hopes for the remainder of those bulbs! After all, I planted 10 dahlia bulbs and got 9 plants. I’d be pretty happy if I could get 9 out of the caladium bulbs!

Here are the two that are out. 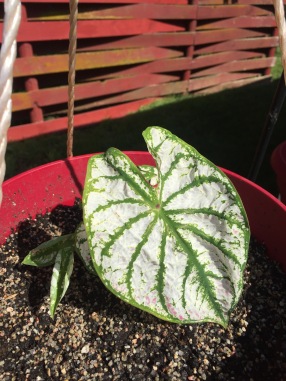 There are two more that are that green and pink variety coming up. I am REALLY hoping for some pink and white! There’s the tiniest shoot coming up in a box with my basil, so we’ll see what that ends up being! Those caladium are currently my garden obsession. I love them, and I watch them daily to see what shows up and what changes they are going through.

That’s it for today! Believe it or not, I have been knitting, just not terribly inspired to get any pictures taken. I probably need to rectify that in the near future.