As is usual for us, our vacation days have been packed right full of fun activities. As it turns out, the paved bike trails here are smooth and lovely, and also very confusing. Which means we’ve spent a lot of our time riding around lost. But, not distressingly so. I mean, it seems like as long as there’s a lake around, we know we are fairly close to where we need to be. However, we are off route more than we are on I think.

On day one we got so off route following a bike path that led to a dead end we found a sea dragon. A lake dragon maybe? He was hiding in some lovely flowers.

We started day 1 of biking pretty early, so ended up back home early, in time for a snack and a late nap. Then we went to the local grocery store, picked up some steaks and charcoal, and Mr. Ink made me steak, baked potatoes, and green beans. It was so delicious, I feel certain we could not have found any finer cuisine anywhere in the area.

On day 2, we weren’t quite so eager to get started early. Instead, we drove out to a local winery, tried their wines, bought a couple bottles, then headed to the movie theater to see the new Star Trek. Once that was over, we noticed we had passed a greenhouse, so we HAD to stop there as well, and Mr. Ink picked out a souvenir sedum for the front bank.

Once home we snacked on cheese and crackers, and THEN headed out on a bike ride quite late. We headed on a longer route, and had truly assumed that we would know where we were going this time.

That particular route started out at an arts area, and had some large art installations around the trail, fun to look at! 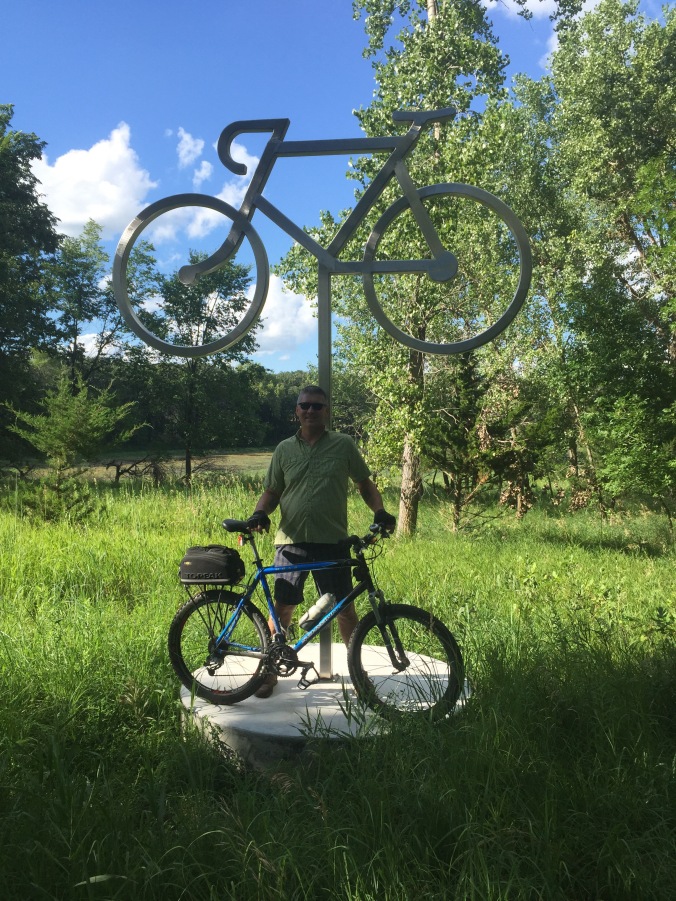 We ended up going to a state park about halfway through to enjoy a beer.

A beer with a view.

And, pretty soon after that I bonked hard. I guess cheese, crackers, and popcorn being the only thing eaten since breakfast does not make fuel for a long bike ride. I was at that place where I could only ride about 8-10 mph and couldn’t think straight either. This gets scary when crossing roads. Bonking on the bike also brings out extreme angry feelings for me, so when Mr. Ink would ride off, or cross a road without me, I’d get further irritable.

Thankfully, we made it back in one piece, as the sun was setting. Mr. Ink asked where we should go to dinner and I irritatingly said “I am in no position to make decisions, you decide.” He said “Why don’t you have a peanut butter sandwich and a shower, and then we’ll see how you feel.

Naturally, a little food in me, I did feel better. We ended up going to a mexican restaurant at about 10 p.m. and once I had a meal in me I said “Now that I’ve eaten, I can say I had a really fun time on that bike ride!” Mr. Ink says “I thought a meal might change your mind about the ride!”

As is usual for us, we haven’t really been relaxing, though activities and no time frame are relaxing for us. So, we are going to try this relaxing thing this morning, and head out on a long bike ride this afternoon. I am hoping to ride into Minnesota just to say I did! We have already purchased lunchtime food, so we should at least be well fueled for this one.

I don’t have very much spinning to show off. I had really hoped that Mr. Ink would do things like sleep in, as he so loves to do, so that I could get some coffee and spinning time on the deck. But, he’s just been so excited about every vacation day that he gets up when I do. It’s so weird!

I’ve been squeezing that time in when I can though, here’s where I am right now. And spinning is on my list of things to do this morning before riding bike. Naturally, he’s already up and asking if it’s time to make breakfast, so spinning….soonish. Hah!