I finished a second knitting project over the weekend! I’d started out with some of my handspun singles, but decided I didn’t actually want to knit them as singles. Nothing wrong with the yarn itself of course, I just didn’t love the colors as they were. So, I decided to do a project holding those singles double. I chose the Ethereal Cowl, which is a bulky quick knit, and it worked out quite well!

If I had to knit this again, and I might because it was a rather pleasant knit, I’d do a provisional cast on so I could graft the beginning and end together. It’s not a particularly lovely looking seam quite frankly. That being said, the bulkiness of the cowl itself and the cable and lace combo is pretty fantastic! I really had a hard time envisioning this one until I blocked it. For some reason, in my head, it was disjointed. It was after a blocking that I realized the entire point was to have the lace be the body of the cable. In any case, I like the colors better this way, the pastels all separate didn’t really work for me.

Naturally, I picked another project immediately. After all, I’d managed to knit myself out of a work project this weekend. 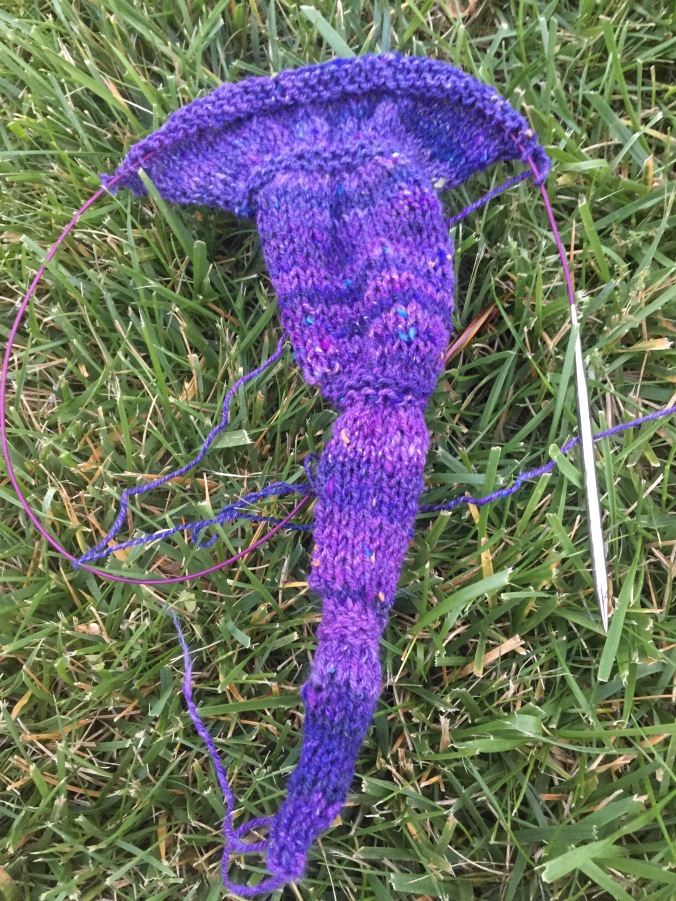 This is the Pinched! pattern on Ravelry out of Miss Marja’s handspun. It was hard to get a proper colored photo, the yarn is GLORIOUS in color in person! I have modified this pattern quite a bit, as it’s not the best written pattern as is. (It’s also free, so no actual complaints!) I am doing the increases on either end of the rows rather than at the beginning of each row, and leaving a knit stitch on either end of the pinched sections that is not decreased. I prefer it that way. But, no matter how I chose to knit it, it would look wonderful in that handspun yarn! I love this project so much I suspect it’ll fly off the needles. Thus, I need to pick out and begin another at home project. No decisions have been made yet on that!