Miss Butterfly came home yesterday, clearly amazingly tired. When she’s quite tired, she gets all the more desperate to go go go, spend time with friends, make plans, etc. And when they don’t go as expected, it’s all the harder for her not to fall apart. I could tell she was exhausted and it was one of those days where I’d be sitting at one side of the room saying the word “no” and she’d be sitting at the other side of the room somehow hearing the word “yes.” It was exhausting.

At some point, she was laying around doing nothing, not wanting to do anything, and I don’t allow her to just spend all day on electronics so she’d already used her allotted time with them. Well, laying around acting dramatic and bored doesn’t really work for me, so I asked a very simple question. “Where’s YOUR knitting?” And much to my surprise, she brought me a half cast off dish cloth she’d started a couple years ago and hasn’t touched in a year and a half. We cast the rest of it off, and then I asked if she’d like to do more, and she said yes. So, I set her up with some needles and yarn, and off she went. 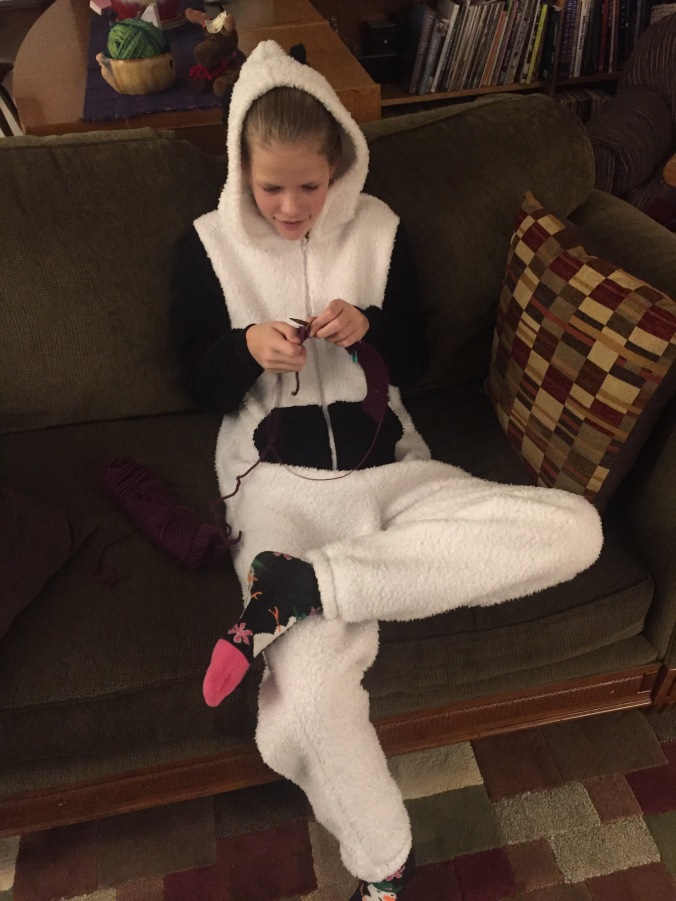 Happily knitting away in her panda suit. At one point last night she was using her toes to tension the yarn, which was hilarious. This morning she’s back at it with the knitting. This is great, because I’d already decided that we, as a family, were going to listen to Dune this winter. But I was worried about how she’d tolerate sitting doing nothing while listening to an audio book. If the knitting takes, it won’t be a problem.

I finished my ear warmer.

It used up every last inch of yarn, so I’d call it a great success.

Here’s another project that used up every last inch, and unfortunately it wasn’t enough. 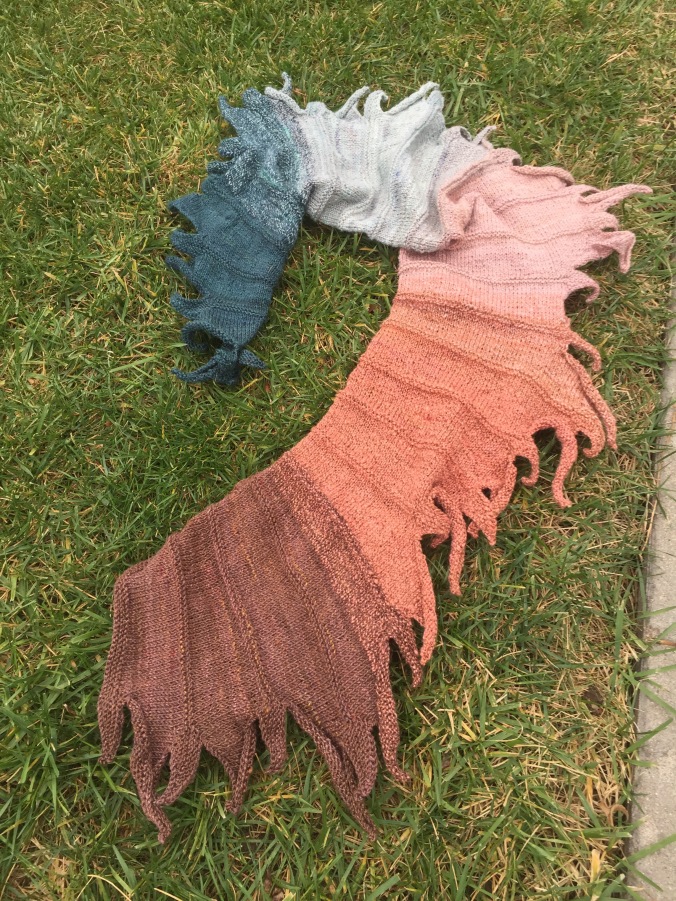 Yep, that’s a completed dragonfire scarf, if by completed you mean ended abruptly. Nevertheless, it’s quite long. And with all the hanging wedges, I don’t think it’ll be too noticeable that it’s not symmetrical.

I had already begun another scarf, but 8 rows in, Miss Bug claimed that as the yarn she’d like to use for her project. Which is fine, really. I did however leave those 8 rows on the needles in case she grows bored of her knitting.

So, I had to pick yet another project which is in its infancy, out of Noro Taiyo Sock. We’ll see how that goes! We’ll enjoy another quiet day today I think. I want to get another batch of bread baked, and a batch of cookies. And I have to clean the kitchen as we had company over for dinner last night. Other than that, and maybe a walk, it seems I’ll be able to work on my next project on my last day of vacation. *weeps*

One thought on “Knitting Panda!”