I am back at it in the work department. It’s been quite busy, but easily handled if I keep my nose to it. It’s also been kind of…I dunno…full of potential change again? That seems to keep happening. Cycles of major changes which aren’t necessarily great but can be adjusted to, and then points where it feels like stagnancy and I long for some type of change. I guess that’s what happens if you have been working at the same place for 11 years. I just keep reminding myself that changes will be adjusted to over time, and they’ll quit feeling like such a nightmare eventually.

I did not grab a photo of knitting for today. Mr. Ink spent all afternoon working on the fishtank in our bedroom, since it was raining outside. He took a break so that we could all go out and see a movie, which we did. But, once home, he began again. After watching him do one of his indoor hobbies, I realized that it’s SO NICE to be interested in various fiber arts, because it’s quite contained. Once he got started on the fish tank project, there were various filter parts and hoses and towels all over the bedroom and bed. The small bathroom had buckets of…I don’t know what. The big bathroom had bleaching driftwood in the tub, causing Miss Butterfly to be unable to get her shower. The kitchen was chockablock full of driftwood and stones and buckets and water being tested. There was algae in my kitchen sink. I could do nothing at all in the sink. There was a trail of water between the bedroom all the way to the kitchen sink. And this morning I realized that I was happy I’d never gotten around to deep cleaning the kitchen, as it’s basically destroyed now, and I’d just have to do it again.

Fiber is clean, compact, and MOSTLY dry. It’s a good hobby! It was after 11 when I went back to the bedroom to see if I could go to sleep, but with filter parts and hoses still all over the bed, and Mr. Ink attempting to place driftwood in EXACTLY the way he wanted it, elbows deep in what looked like truly disgusting water, I realized sleeping in my bed wouldn’t happen any time soon. So off to the guest room I went. It was 2 am when he finished and came to let me know I could retire to my own bed, so I am glad I didn’t wait up!

While all this insanity was going on, what was I doing with Miss Butterfly? Watching Glee, listening to podcasts, chatting,  and having our own little knit night. 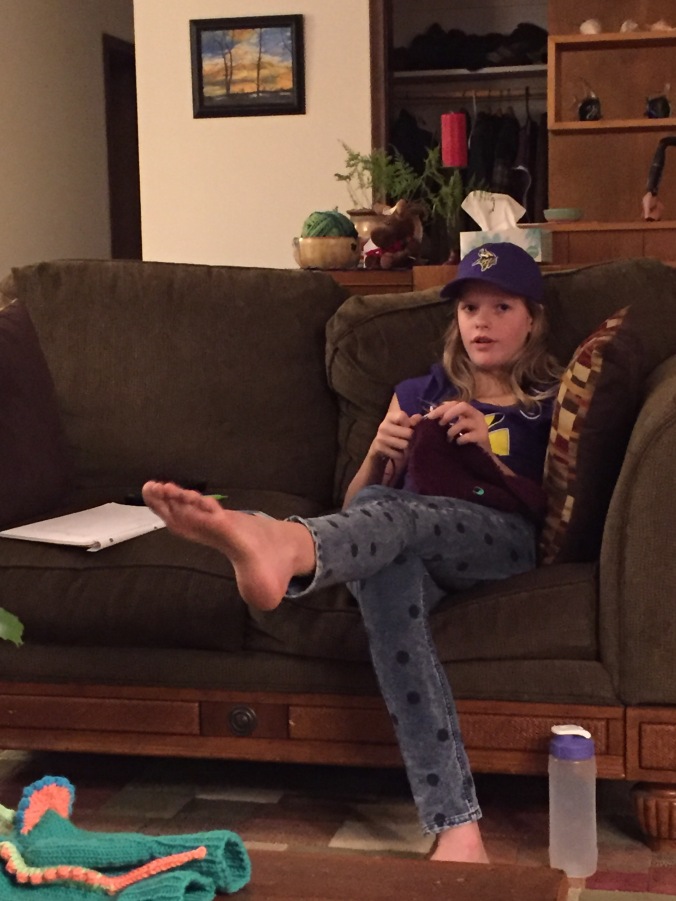 Because she won’t put that knitting down. And decided to make her own pattern, on her own, and write it down on that notebook. That notebook she’s using to also track the number of rows she needs for her pattern. And using stitch markers like a boss. And figuring it all out herself not even needing my help. All this after only ever knitting one small dishcloth 2 years ago.

Funniest moment was when she asked if she’d made some mistakes in the first couple rows. I inspected, and said “Eh, yeah, it’s a little mistakey, but we can add fringe!” trying to not make a big deal about it, frustrate her, and make her think she had to start over. Her response? “YOU’RE a little mistakey!” in that perfect 12 year old tone that told me she wanted to be a smart mouth but also wanted me to know it was a joke. So basically, now, every time she’s a little annoyed with me she says “Mistakey.”

It really was a lovely day. Not just with the knitting. We took a walk around a lake, getting caught in the pouring rain halfway through but still having a great time. We made more bread, and more cookie dough. We saw a movie that she LOVED. An all around good day after the frustration of the day before. (Which…well…I KNEW she needed sleep!)

I continued to have issues with my current and only knitting project, had to rip it out multiple times, finally decided to double the amount of stitches instructed to cast on, and got some knitting in. More on that tomorrow. However, every once in awhile there’s a moment where you get frustrated that you paid money for a pattern. It’s FAIRLY rare, but it’s definitely the case this time. But, seriously. More on that tomorrow. Welcome back to the work week everyone.