At our house, we seem to be in a competition over which family member has the best immune system. In other words, I suspect all of us to be fighting the onset of a cold. But we are still at the point where we feel under the weather and very tired, and a little sore throat-ish, but not full on sick. I am wondering if any or all of us will escape it. In the meantime, we are eating early and easy dinners and all going to bed quite early to keep up on our sleep.

I started another project, one I think will be likely to capture my attention instead of annoy me like yesterday’s cowl.

The pattern is called Gothic Spires, and it’s out of this handspun: 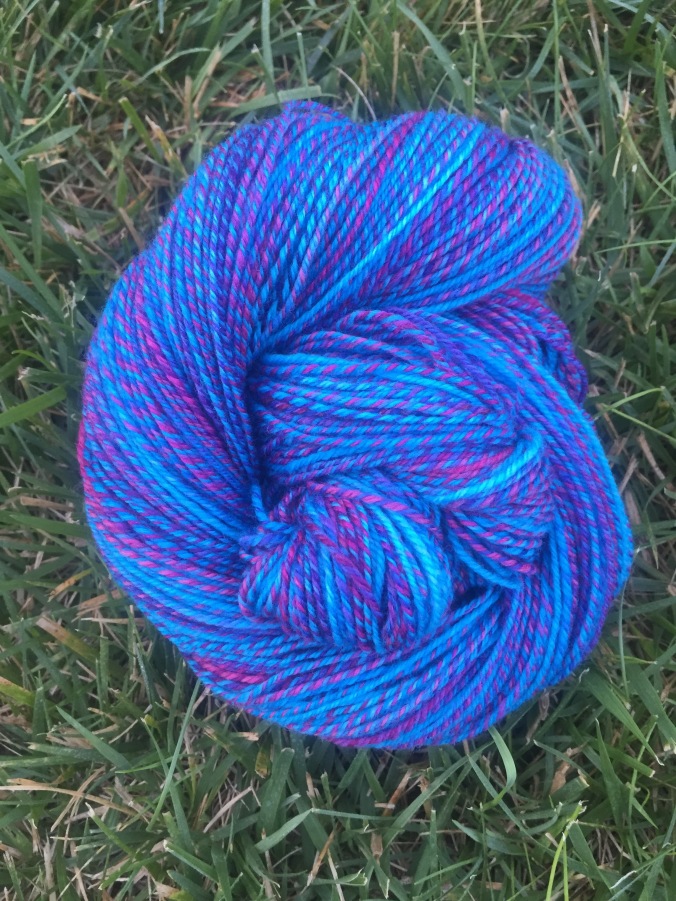 There’s fun lace patterning which I think will pop a whole lot more when I have the opportunity to block it. It keeps me occupied pretty well, without a ton of thought, though I am tied to the pattern. I admit when I wasn’t feeling well last night I was wishing for something stockinette or garter, but if actual full on sickness happens, I am sure I can find something to throw on the needles for that.

I do want to talk about the yarn though. When I was a newer spinner, I was so anxious to spin super thin yarns. I worked so hard at it. And I didn’t realize that was only 1/3 of the battle. I mean, I fairly quickly got to the super thin yarn achievement point, and I was quite proud of myself. But, at that time I thought it was half the battle. The other half of the battle being the ability to spin thick again. Meaning, I felt that half the battle was being able to switch between thicker yarns and thinner yarns with intention. And that was certainly a battle.

BUT, the part I was still missing back then was the battle for softness. Meaning, spinning thin singles is one thing. Spinning thin singles with low enough twist for a nice soft yarn is quite another. For so long, my yarn was on the ropy high twist side. Soft enough to wear, but not luxury soft. But this yarn? This yarn is an example of a plain superwash merino that turned out luxury soft simply due to low twist thin singles then plied 3 ply.

As I sit here with my nahant recently knit out of 3 ring circus and fat cat knits batt, I realize that I have been achieving that super soft low twist goal for awhile now, and sometimes understanding that. But never has the point been driven home quite as well as knitting with this yarn. This yarn is one of those yarns that truly shows 10 years of spinning experience culminated.

I think this is one of the most important reasons for spinning knitters to use their yarn in handknits, rather than put it up on a shelf deciding it is too pretty to use. I learn more about my spinning when I knit with my handspun than I do while spinning.

Naturally, there are always wool breeds that you cannot make overly soft. There are other factors at play. But, I think from here on out, unless I find a way to do better, when it comes to soft wool fiber, this skein should be the handspun I look to in order to achieve “the best” handspun for me.