Yesterday was Saturday and thus a day I should have blogged. But I didn’t have time. You see, Mr. Ink and I have been looking for a new car for a year now. If by looking you mean discussing, considering, but not making decisions. However, we are at a point where a decision needs to be made, and the only way to do that is to give ourselves a deadline. We decided we need to make a decision within a week.

So yesterday was dedicated to test driving vehicles. And we did so all day long. When we set out we had a list of 5 possible vehicles that met our requirements. At the first stop we managed to eliminate one of them, which was great. However, the rest of the test driving didn’t go quite so “well.” Meaning, we loved all 4. All 4 have serious points in their favor and not a lot not in their favor. Which makes a decision difficult.

When we headed out to test drive, it had begun to snow. I’d heard “wintery mix” so I wasn’t too concerned about accumulation. However, that snow seemed to surprise, as it actually stuck around. It was wet and heavy snow, it stuck to everything, making the world a winter wonderland. And it didn’t quit. So, we test drove cars in the snow. Which I suppose is good, as one of the requirements is all wheel drive in part for snow and our weird driveway.

Once home, it was less about knitting and more about trying to make a decision, looking up different lines of the cars we tried and attempting to narrow things down. We say we made a decision last night, but I don’t think I’ll tell you what it is yet, because I suspect it isn’t set in stone.

It was exhausting! And, not just exhausting, but I am the winner of the immune system challenge so far, Mr. Ink has caught a cold. So, sadly, test driving and making this decision is even less fun than usual for him. I am fortunate as he doesn’t live up to the trope of being a terrible man to have around the house when sick. Quite the opposite, he just continues on as if it weren’t happening, just slower and with less joy. And I think that was certainly the case yesterday.

Nevertheless, I’ve got some knitting to show off, a finished project even! I finished the appropriately named Snow Showers cowl I was working on that is a tube. This is the pattern that I didn’t care for. But the finished object is pretty nice actually. 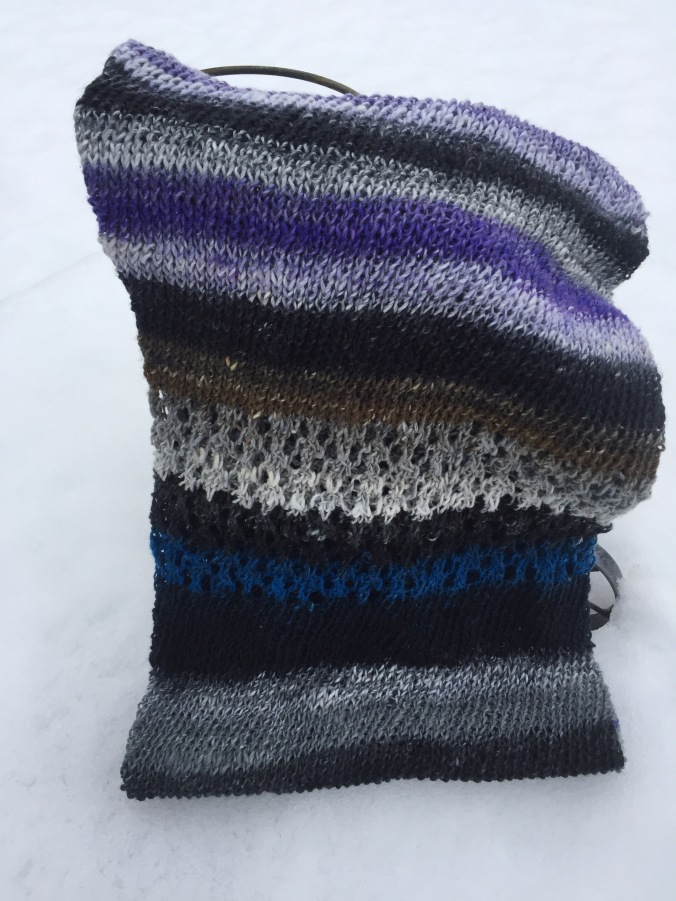 You can see the lace detail in there, and I do like the drape of it. The Noro Taiyo Sock is a bit overspun in the singles department, so you can see the slant of overspun singles as well. Not that I mind, it’s a tube, it doesn’t matter. I’ve never knit a continuous tube before, and upon finishing was quite surprised to realize I had no where to properly secure my yarn end. I did my best, hopefully it won’t pull out.

The snow is melting already, it’s not nearly the winter wonderland it was last evening. I told Mr. Ink I’d be staying in all day, but I suspect if the snow melts I’d love to take a walk and go to a store. We’ll see. After such a busy yesterday, having this one stretch before me in silence is a relief.