The ice storm certainly hit last evening, and it’s still raining today. We treated the driveway with salt before we went to bed, but it was all washed away before this morning and replaced with a thick layer of ice. Mr. Ink headed out to salt again this morning before work. I made the mistake of watching from the window. He’d salt in front of him and take mincing steps. He’d fall and slide toward our busy street, then quickly pour a load of salt in front of his body as he slid toward the street to stop himself. The back side of him was soaked as he finished up, so I know this was a disturbing trend this morning. I decided to stay home. He left in the civic. Most likely because it’s the older car and if the worst happened, it would feel less awful.

I decided to seam the baby moccasins I knit the parts for yesterday. And then I decided to go outdoors and take photos. I hugged the edge of the house as that’s where there’s no ice, and made it to the side garden to take photos.

These are the baby knits for my new nephew arriving in March. I made the moccasins last evening and seamed them this morning. I’ve never knit baby booties before, this was a first. I have to say, my initial impression is that they are simultaneously fiddly and satisfying. I am glad I made them.

They wanted to slip all over that ice covered stone. In fact, they kept trying to slip into the muddy garden, so that wasn’t ideal. My photo was snapped as quickly as possible so I could move them to a safer spot.

I had finished the sweater days ago, and blocked it over the weekend. I kept thinking that I’d need to go out and get buttons, and as such, I’d not be able to show it off anytime soon. But, as I was wandering around the house yesterday unable to go shopping due to ice, I remembered that I have a rather expansive old button stash. I decided to shop there instead, and came up with 3 light blue perfectly matching buttons. 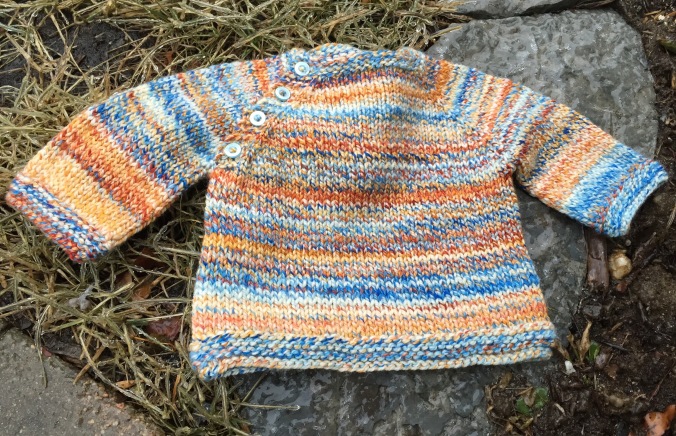 I have a small ball of yarn leftover, but probably not enough to knit another item from. It was good fun to knit a few baby items from handspun all at once. I am eager to send these out the door along with the stocking. The hat is newborn sized, the sweater says 0-3 months, and the booties say 0-6 months. So, it’s entirely possible that none of these will fit at once. But, they’ll last for awhile, and that’ll have to do.

Miss Butterfly and I are hoping to be able to get out later and wander the neighborhood in boots on the grass. However, I just took a look at the radar and it looks like it’ll be pouring for ages and ages. We might have to call it a loss. We have other plans too, french toast breakfast, chores, and some tv watching. I think that’ll do for an ice day! Are you in the path of this storm? If so, how is it where you are?