This is a question I have been asking myself since I finished the sweater. I have been struggling to settle on anything really. And then I realized, maybe some spinning is in order?

So, I began a project I’d thought through and prepped prior to pulling out and becoming obsessed with finishing the sweater. Dyeabolical was retiring two of her colorways that I’d been admiring for awhile but never spun a few months ago. So I decided to pick one of each up, and then once I got them, I also thought they might make a fun mash up. 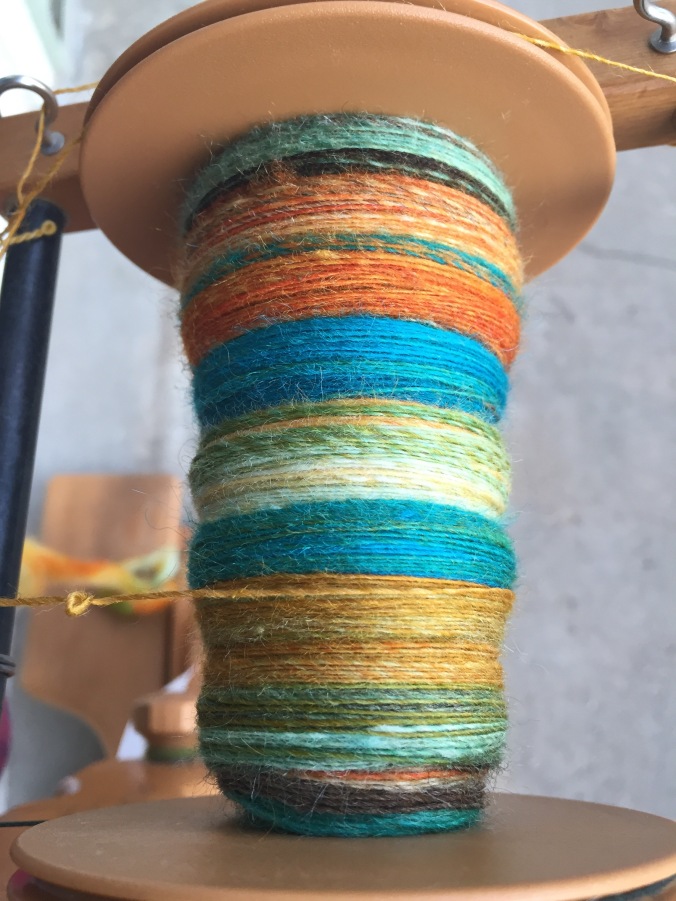 So, I’ve been spinning Fate, PhD and Steampumpkin together. I’ve got fun plans for this project and I am looking forward to seeing it through to completion. I started last evening.

I also knit a baby hat, but haven’t gotten a chance to weave in the ends. I plan to do one more in the very near future, before figuring out my next knitting project.

Today however, is for buttons and afterthought buttonholes. And for Miss Butterfly. We will be headed out together to get buttons and then go for a pokewalk together. The weather is quite pleasant, and we figured we’d take advantage of that.

On Wednesday we had a snowstorm here. Now, it wasn’t all that much snow, but our current city mayor has been perfectly abysmal about snow removal. And she just doesn’t learn from past mistakes. I’ve lived here for 12 years and in past years we’ve had far more snow, and still far fewer on the road problems. Wednesday morning I had to take Miss Butterfly to the orthodontist, then get her back to school and go to work. Seeing the snow in the morning made me double the amount of time it takes to get to the orthodontist. And so we set out. Except, since no snow was removed from the roads prior to rush hour (because it didn’t QUITE meet her required 2 inches of snow before plows go out) and the bulk of the snow HIT during rush hour, the entire city roads were basically a very large parking lot. And since they were a parking lot, there was no way for the plows to actually get through. We never went above 10 mph all the way to the orthodontist. Miss Butterfly played both our pokemon games the whole way, since at that speed you can do everything in the game. I bit my nails and ground my teeth and tried to tamp down the anger. The reality was that my new car was doing quite well in the snow, but with that many on the road, and many other cars doing poorly, there just was no way to speed up the process. It takes 10  minutes to get to the orthodontist. It took us 50 minutes. But once we got there, ridiculously late, we found out that all the other appointments had been late and the assistant hadn’t been able to get in yet either. So, in this case, late wasn’t actually a problem.

Yesterday, we hit 60F! So, it was so odd to walk in to work with snow on the ground, and out of work with no sign of snow whatsoever. The forecast for the foreseeable future is quite mild so we’ll just keep taking advantage of it. It’s really too bad Mr. Ink works today, as I suspect he’d be out gardening all day otherwise.

In any case, hopefully I’ll have finished sweater photos tomorrow. Have a great weekend all!