Remember that weezer song? It’s a total earworm for me.

Well, you don’t have to  destroy my sweater because I already did. I posted my finished sweater yesterday, and it wasn’t even an hour later before I was cutting it all to pieces again. Maybe that’s dramatic. I removed the buttons and collar/button band, and then removed the bottom part of the sweater back to where I’d add another handspun stripe.

The thing is, I just couldn’t manage to imagine myself wearing the thing as it was. I mean, 2 years have gone by, and while I followed the instructions in how long to make the sweater, I didn’t take into account my personal preferences for fit. And, well, I am getting older and I like a longer cardigan. Trendy isn’t really me. I guess it never has been. On the upside, I have knit an additional 3.5 inches onto the body of the sweater, so it’s going ok.

Between the time of the sweater finish and the sweater destruction, I knit two baby hats. 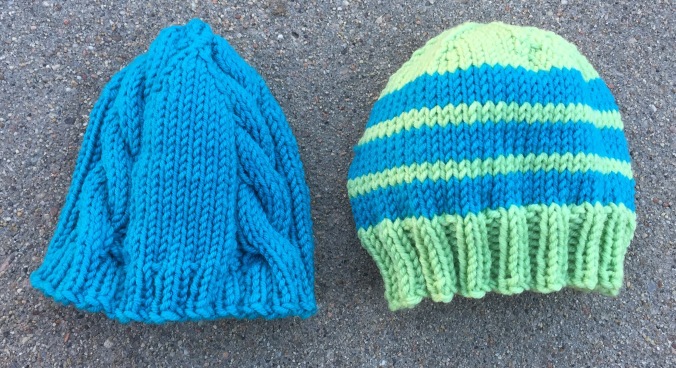 Mr. Ink’s stepson just had twin boys. So I knit hats. I chose hats simply because they are small and I had the yarn in stash and they knit quickly. Additionally, I am not entirely sure that dad has access to the babies at the moment for reasons I don’t really know. Lives are complicated. So, being unsure if the hats would even make it to the babies, I figured I wasn’t going to spend a bunch of time on them. The gesture, acknowledging this for Mr. Ink’s stepson is more important to me than the hats getting to the babies. The babies don’t care. So, I’ll send out hats today, and release them into the world. Where ever they end up is ok by me.

That’s it from me! Unless I lose focus, I’ll probably be forced into some sweater knitting quiet time again. I mean, I really WOULD like to wear the thing now! And preferably this season. And with a bunch of weather in the 50s and 60s, that time seems short. Though, with our luck, March will bring on the actual freeze.