I almost wrote the title as “fad finding” which would be entirely appropriate when speaking of the Find Your Fade shawl. I am well into the second skein of the fourth color now, and just completed the lace section last evening. The rows are very long. Thankfully, they are as long as they are going to get, I am no longer increasing stitches. But, I’ve 3 more colors to go after this one, so I’d better well get accustomed to these long rows! 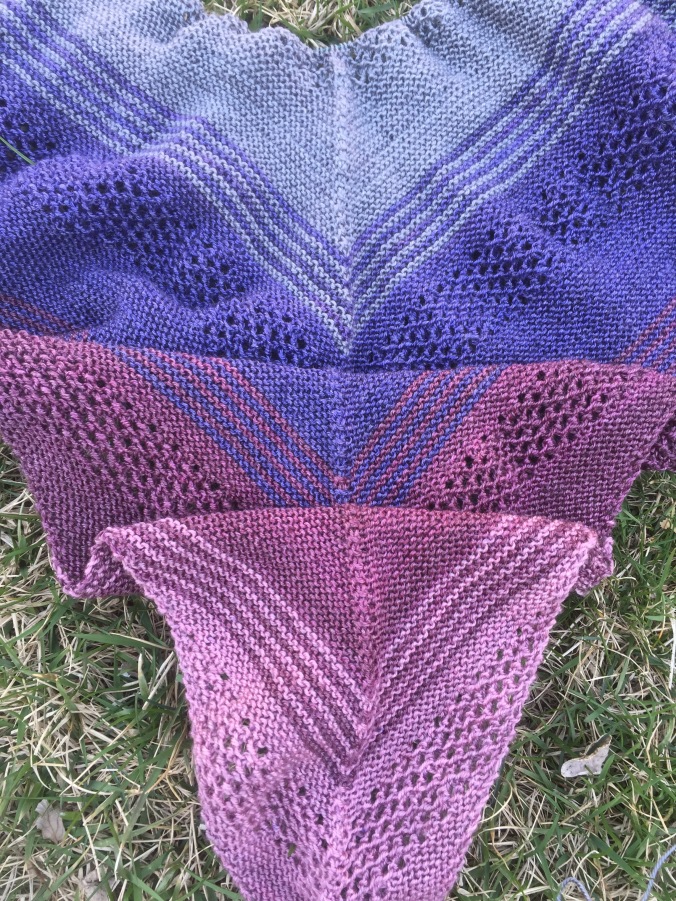 My coworker, who is originally Finnish, and knows how to knit and crochet, but hasn’t made a habit of it over the years, has recently had a resurgence in her crafting desire. Last year I gave her some handspun yarn she had her eye on, and she was thrilled to bits. She crocheted it into a hat that I see her wearing almost daily. 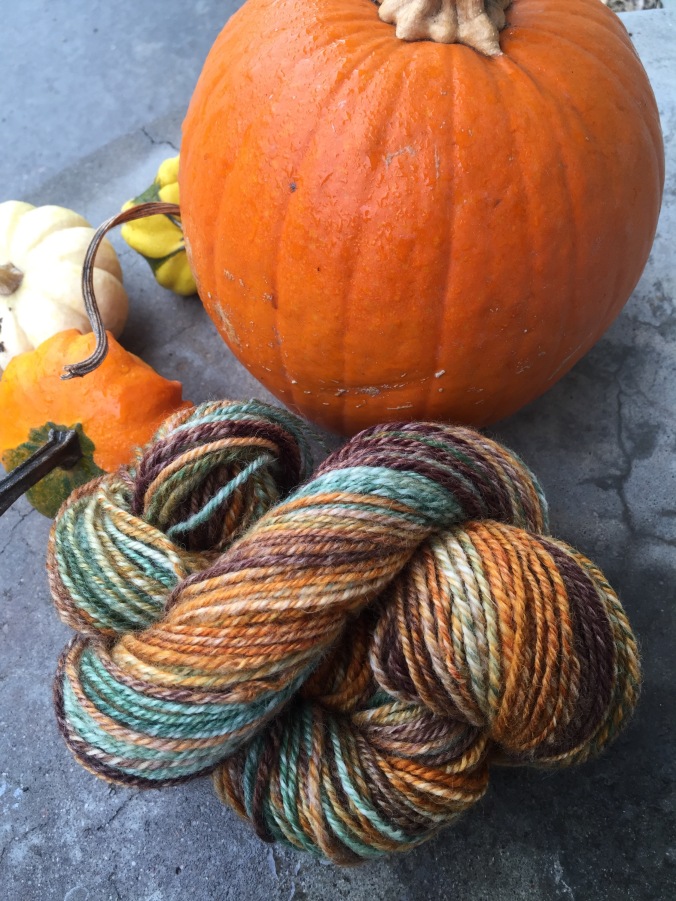 After she made the hat, she decided she needed to crochet more things. Now, this is a woman who is a huge advocate for wildlife. And, she found some bird rehab/rescue places that were requesting various bird houses made out of yarn. She ordered some yarn from knitpicks, and set out to create birdhouses. She brought them in to me before sending them out, they were great! She soon ran out of yarn, but she says the itch to craft hasn’t disappeared and she was going to need to make another order. Well, knowing that I’ve got a bunch of one off balls of knitpicks hanging around from projects completed or gone by the wayside, I told her I’d donate to her cause. This means that 7 odd skeins of knitpicks yarn went to her this morning. She was thrilled, and I think that means I get to add 770 yards of “knit” yarn to my yearly total. Meaning  I haven’t been counting the knitting I am doing for Miss Marja, or the knitting I am doing with yarn that has arrived in my stash this year due to that not being “destash” yarn. I’ve knit far more than 770 yards that would fall under that category. But, in this case I destashed the yarn, so I get to add it as “knit.” Current totals, 3.88 miles knit, 1.75 miles spun. At the moment, what is leaving my stash is double what is going back in. That’s sort of where I’d like to be, overall. Can’t say I’ll be able to maintain that throughout spinning “season” but it’s a great start!

Miss Butterfly is getting braces again next week. We were in this morning for small spacers for her to wear this week, in order that she has the appropriate room for the mouth gear being installed next week. Also of note, she gets to throw out her retainer. Which is great, because it’s been used and abused so hard at this point that there’ve been bits falling off it for the last 6 months. The orthodontist didn’t want to replace it, as we were too close to phase 2 braces, so he’s been piecing the thing back together just to get us through those 6 months. If he could have used duct tape, I swear he would have. This is the second retainer she’s had, and amazingly enough we managed to get through both of them without losing one completely, or throwing one out completely, or breaking one beyond usability. I feel very fortunate. Then again, I told her from the start she has to buy the next one of she loses one. So, it might have been the correct incentive for her. In any case, I am as glad to be rid of the thing as she is at this point I think!

Tonight if it hasn’t rained too much (and it’s currently raining) we may try to get a dirt bike ride in. I have to admit, I’ve been less than inspired to ride dirt lately, so I am waffling back and forth between wanting it to rain hard, and wanting it to dry up so a dirt ride is possible. That being said, if I am not feeling it, I figure I’ll just take a nice dirt walk, and grab my step goal. That could easily make for a win win situation. It’s cold today, in fact the rain that happened this morning was really ice pellets at first. But tomorrow we are looking at 73? It’s so nutty out here in March!