Got home last evening and decided that Miss Butterfly and I would tidy up the house. I’d kind of warned her the night before that I wasn’t going to let her run off with her friends, that she’d be at home with me. So, she didn’t fuss at all when I asked for her help, and we got things straightened up nicely. Then I set her to cleaning her room, which was badly in need of it, and I headed out to mow.

Our yard is nice and wide, being on a lot and a half. I used to love mowing. Truly. I’d square up the odd bits at the edge of the yard and then just make long passes across the wide back of the yard until it was done. It was very soothing. Not so any more! With 5 trees, a garden bed with another 3 trees in it, and a huge planter where the firepit will eventually be, all in the middle of the yard instead of the edge of the yard, I am struggling with enjoying the process. Sometimes it feels like Mr. Ink is single handedly trying to make me hate the job. I mean, usually it takes the high heat of August/September for my mowing enthusiasm to wane. But I am already so so over it. And it’s simply because now I have to mow around things, and nothing has a proper pattern, everything is all screwed up.

It’s likely time to start enclosing 4 out of the 5 trees into one large island garden bed. It’ll still be mowing around something, but that’ll eliminate some of the irritation.

In any case, after the mowing chore was done, I grabbed a photo of one of my latest knitting projects. I began the Tibetan Clouds stole out of laceweight handspun singles. But, I didn’t read the charts too well, not noticing that some of the patterning was every row, rather than every other row. So I ripped it out. “No matter.” I thought, as I’d been annoyed with my cast on as well. That little circle was too gapped. So, I pulled out some videos with the cast on trick where you can tighten up that circle once you get started. I cast back on. And proceeded to cast on another 7 times, but being unable to get it to look right, line up right, not twist, etc. And every time I pulled that back out, the precious handspun would knot up, and I’d have wasted a section of yarn.

I gave up. I went to my stash, and I got out some dream in color jilly. I started over. I had no trouble, first try.

And I tightened up that cast on circle with no problem as well, securing the yarn and weaving in the end.

The 9 inch circular needle I purchased for things like sweater sleeves came in handy here, I was able to use it for a good long while before moving to magic loop.  I am still in magic loop mode, but as you can see, I’ll soon be done with that too. I have decided to skip the beading on this one, I think it looks just fine without.

However, the ease at which this is knitting up, after the handspun laceweight singles fiasco, makes me almost feel like I am cheating! I am sure I’ll find something else more appropriate for those singles.

In any case, things are moving quickly in the garden right now. Those two higher heat days really kicked things in high gear. Today? Big rain storm, so you know we’ll keep heading in that direction.

I’ve got a new color iris! It’s not that different from the bulk of those I’ve had. It’s almost all burgundy, with a tiny bit of yellow. The ones that came with the house are more of a purple toned burgundy with a distinctively yellow middle. Here they both are: 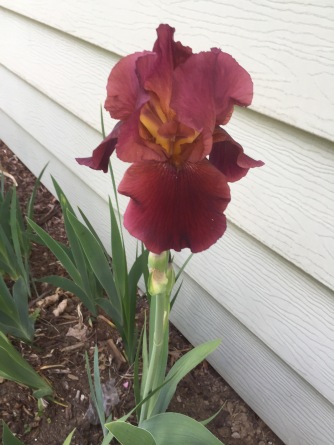 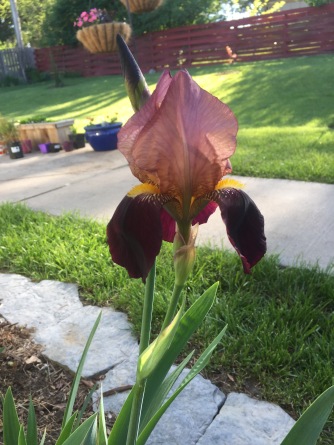 While the new color is very similar to the first, I am thrilled with it. I am sure this is the only new color in the bed, so now I know what to choose to plant next. Yellow. I totally want yellow irises. In this iris bed, as well as the other iris area that isn’t in bloom yet, so I can’t show off yet.

My favorite peony is blooming! No other more traditional looking peonies have bloomed yet, but the favorite one has begun! You’ll see more of this one, there’s a hanging basket above it that makes that area look particularly charming. Oh, and do you see that lily at the bottom left? It’s another stray lily coming up. I’ll let it go this year, as it’s very young. I must have left a scale in the ground when I moved the two tall lilies last year. Who knew I could just dump the scales in the ground and get a propagation? I mean, maybe I didn’t need to spend QUITE that much time over the last 9 months working on my lily propagation project? But, I suppose we’ll chalk it up to a learning experience.

I’ve been getting very annoyed with the hyacinth and crocus greenery lately, as it’s really looking sloppy. Thankfully, it looks like it’s browning down all of a sudden, so I’ll be able to cut that back and tidy things up shortly. I also need to get the mums pinched back, they are growing like mad, and it’s TOO EARLY!

Well, that’s it for me. I did my chores, I got to play, and tomorrow I should have a photo of some finished handspun. Hope you are enjoying the midway point in your week!

One thought on “Chores, then play”