I am just going to start right off saying this week was less than amazing, productivity wise.

Ok, maybe that didn’t turn out quite as badly as I thought. My portion of planting got done yesterday afternoon, I kind of pushed myself to do it even without inspiration since I really wanted to cross something off my list. And, I didn’t want Mr. Ink to have to keep watering all the plants in small containers any longer. I guess I am really giving myself grief mostly over the lack of bike commuting and the inability to get motivated about extra house chores.

I don’t have much to report, no new photos of crafts. With the planting and housework I didn’t get my new mystery stole clues done. However, I can tell you what we did for mother’s day. My family, they know me well. They know that traditional mother’s day activities aren’t going to be my favorite. I mean, brunch is nice and all, if you leave me home alone with my coffee and YOU go out to brunch. That kind of thing. So, in looking for a non traditional mother’s day activity, Mr. Ink decided to take us all to see Flogging Molly. Perfect.

Now, this was Miss Butterfly’s first live show that is “our” type of show. She already likes the band, so that was a sure bet. However, her two big concerts have been arena style concerts, which is so so different than small auditorium, packed in, standing the whole time and potentially getting knocked around quite a bit. She did great! We experienced the show from every angle really. We started out way up front, crushed in with the crowd. She stayed there about 4 songs, if the crowd got to moving and pushing, she’d grab my arms and put them around her, but was content. There was a pretty wild pit that had formed behind us, with one row of people between us and the wildness. But, when a drunk guy about her height pushed his way up beside her and decided there should be a pit where he was, she decided that was enough, and I pulled her out of the crowd.

Then we watched from the wall on the side. She was enjoying watching a woman dancing clearly in her own little world. The couple next to Miss Butterfly noticed her watching the dancing woman. With the music too loud to talk, the guy from the couple tapped her on the shoulder and winked at her, communicating that they were enjoying the show as well. She was very surprised.

Then she decided she wanted to head up on the balcony, mostly she wanted a better look at the pit of wild people, she wanted to see how that worked and what was going on. So many questions. So, I took her up there and she got to see the wild group doing its thing, including Mr. Ink from time to time. She was quite bemused about it really. “They are just going in circles, and they push each other but as soon as someone falls over, they lift him back up again. What’s the point of pushing him in the first place?”  She was also delighted to see another woman she’d been watching dance earlier in the evening fully participating in that pit, really one of the only women doing so.

After that, we wandered off and bought her a concert t-shirt which she is proudly wearing this morning. Then, the next stop and for the remainder of the show we settled in near the sound techs, so she could see both the concert and that portion of the event.

We all had a pretty good time. I had fun showing her around one of “our” type of shows. I also have always been struck by how fun it is to take her somewhere new, she is just so insistent on understanding how everything works. Once out of there, she had lots more questions for Mr. Ink, and then she told us she didn’t think she needed to go to another one of those anytime soon. I think that’s perfectly valid. She said she really enjoyed it, and she was glad she’d gone, as she’d really WANTED to go. But she can skip it next time.

Our experience really was punctuated by quite a lot of nice concert goers. Meaning, in the press of the initial crowd, we had a tall guy behind us who first wanted to know if we understood how wild it might get, and then vowed to protect Miss Butterfly from the worst of it if it did get wild. I thanked him for his kindness, and told him at the first moment in which she wanted out, we’d be out. I had numerous people come wish me a happy mother’s day since I was clearly with my kid. People were overwhelmingly respectful of her space. We were quite fortunate in that respect, not every crowd is particularly kind, but this one was.

We are all a little tired today, and will have to make up for that with an early bedtime. This week continues to be particularly full.

Oh, I did get one picture! My rhododendron, while still not planted in the ground, is blooming. 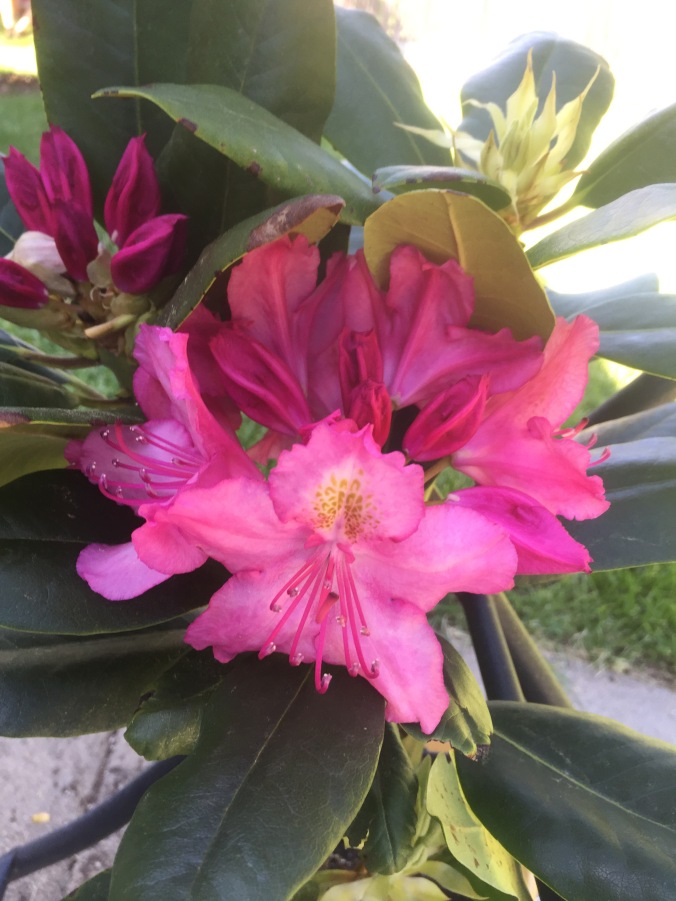