Mr. Ink was a crazy man in yard projects again. He properly edged my veggie garden. Then, he dug off all the top soil. And he dug the hard awful clay stuff under the top soil down about 5 inches and removed it. He put the top soil back in, and then amended with manure, peat moss, and sulfur. I then planted the tomatoes I’ve had limping along in tiny pots waiting for the veggie garden to be finished. He also amended the soil and planted a smoke bush where the burning bush was. 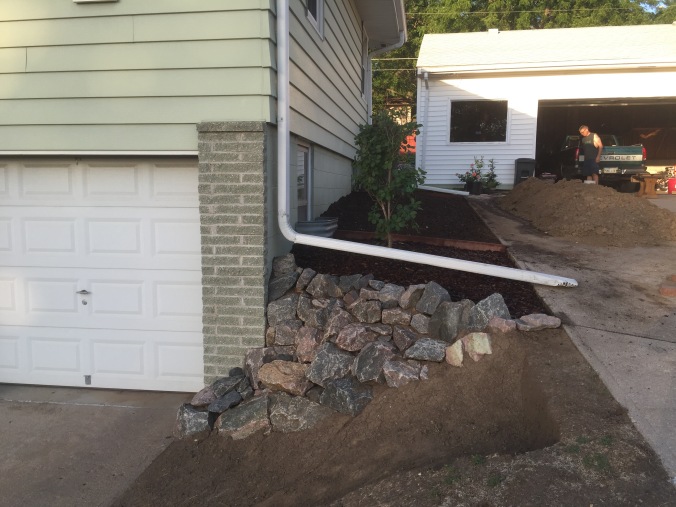 The space in front of the rock retaining wall still needs work, and apparently another tree will go in there. I am not entirely sure what the plan for that section is, but we’ll have to wait and see.

This means that I get to go buy more veggies and herbs to plant! Finally!

He also got my rhododendron planted this week, and has a major goal for this upcoming week to get everything he has in pots into the ground. I am telling you, this would be a MAJOR accomplishment. There’s so much!

My weekend was somewhat more relaxed. I did get quite a bit of knitting done as well as some outdoor chores. It was hot and humid and I found myself quite irritable about being outdoors. Which is silly, since it’s just the beginning around here, and I should get out there and get used to it. I did get the mowing done, but I did my half early in the morning, and I think I am going to make that my habit from here on out. It was FAR more pleasant, and completely shaded, than my experiences in mowing in the evenings.

I grabbed a photo of my astilbe blooming for the first time. I planted two astilbe plants last year, they were small and neither bloomed. This year they are much larger, and the first one has bloomed. I did also plant a third in front of the original two, and it looks like it may bloom this year as well. (It started out much larger than the first two from last year.) 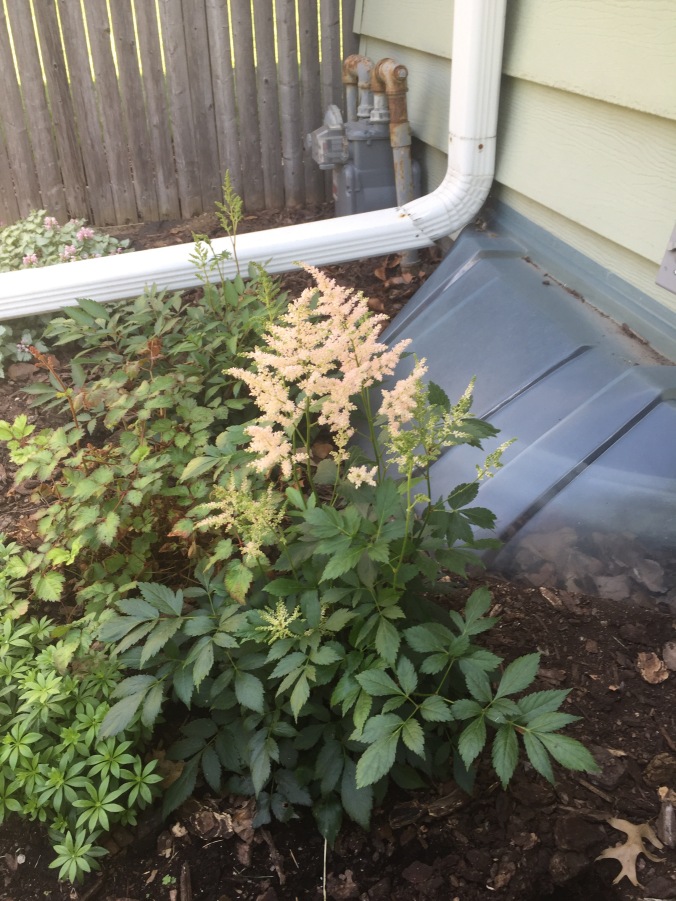 This garden is one of those gardens that stays shady, has really cruddy and gravelly soil, and is in that section of house that’s ugly. With meters and so on. When we moved in, it had absolutely nothing in it. They’d put landscaping fabric over the gravelly soil, put top soil on that, a rather thin layer, and then mulch. So, when I went to add these plants in, I had to pull up top soil and mulch and cut out landscaping fabric. Only to find the cruddy gravelly soil underneath. That being said, they seem to be doing ok back here! The garden is green and filling in nicely, especially all the ground cover I added.

No knitting pictures. I finished both clue 4 pieces and now just have to wait until Thursday evening for clue 5. Doing these mystery knits really pushes me to keep up, and then I feel like I have a finished object in record time. That might be my favorite part about them. I did cast on another scarf out of handspun yarn. I was so itching to use handspun! I brought my sock home but didn’t work on it. Instead, I brought stitch markers to work so that should fix the problem of my stalling out on it. I’ll get a photo of the handspun scarf, but since it’s knit horizontally, it just looks like a whole bunch of squished up stitches at the moment.

Ever look at your list and think “Dang, it’s gonna be a busy week!” That’s me this week.