I didn’t grab any photos of knitting last evening. There’s not much new to show. Nor did I do much knitting yesterday. I did get my more than 15 minutes of weeding done. I finally told Mr. Ink that I was trying to commit to that each day. Surprisingly, his response was a very genuine “Wow! I bet you are seeing great progress!” Surprising because he weeds for hours on end.

He headed out to look for another shrub. He’s nutty, I cannot believe he’d want to plant another thing. He didn’t find what he was looking for after 2 different stores, but he came home with a new watering can and a very nice pair of little clippers for deadheading.

Sometimes he reminds me of my grandfather. I seem to remember that during his retirement, my grandfather used to listen to my grandmother talk, not really say much about it, and then suddenly the thing she wanted would show up at the house. Oftentimes in this case, handmade. Mr. Ink is like that. I’ll mention that I need a new something or other. And, then he’ll come home with “surprises.” It’s pretty awesome. Anyhow, after my weeding, me and my new titanium clippers went out and did a ton of deadheading and cutting plants back.

Today we are off to the funeral of one of Mr. Ink’s coworkers who passed away in a terrible accident. It’s a double service, as his partner was also involved. I won’t know anyone, but Mr. Ink worked with this young man for 12 years and doesn’t want to miss it. Then I found out last evening that Miss Butterfly’s great grandmother did indeed pass away this week. The funeral is set for Saturday morning, so we’ve arranged to get her picked up from camp early so she can get home, wash up, get changed, and head to the funeral. She’s going to be rather startled I think, but I know she wouldn’t want to miss the funeral. What a week!

So, all I’ve got now is photos of a few more of our trees. Not all of them of course, but a few.

This is one set of trees that will hopefully over time grow enough to give us extra privacy and help cut down on road noise. Mr. Ink put them in at the end of the first summer I think, so they are closing in on 2 years here. They didn’t grow much in year one, but we are seeing lots of new growth this spring. They are pretty happy. Beyond that is my weird weeping spruce monster. I purchased it quite cheap last year, and as it turns out, that’s because the top of it was broken. When we got it, it was desperately root bound, and a definite weeper. Such droopy branches. Once planted, it perked up quite a bit, the branches lifted, and it almost looked as if it were dancing. I call it our dancing monster. It’s a SUPER weird tree. I do hope the top fills in a bit, as Mr. Ink is training a couple of the branches to stick straight up in hopes it doesn’t look weird forever. It’s a dwarf, it’s probably already 10 years old, and likely won’t grow all that much.

This one, too, is closing in on two years old. It was just a ridiculous spindly thing the first year and has filled in very nicely. I don’t love that it’s crooked, but Mr. Ink likes to train his tree trunks into weird shapes, so it’s starting this way and over time will probably change. It’s Kousa Dogwood, which has some really amazing buds but this one hasn’t done so yet. 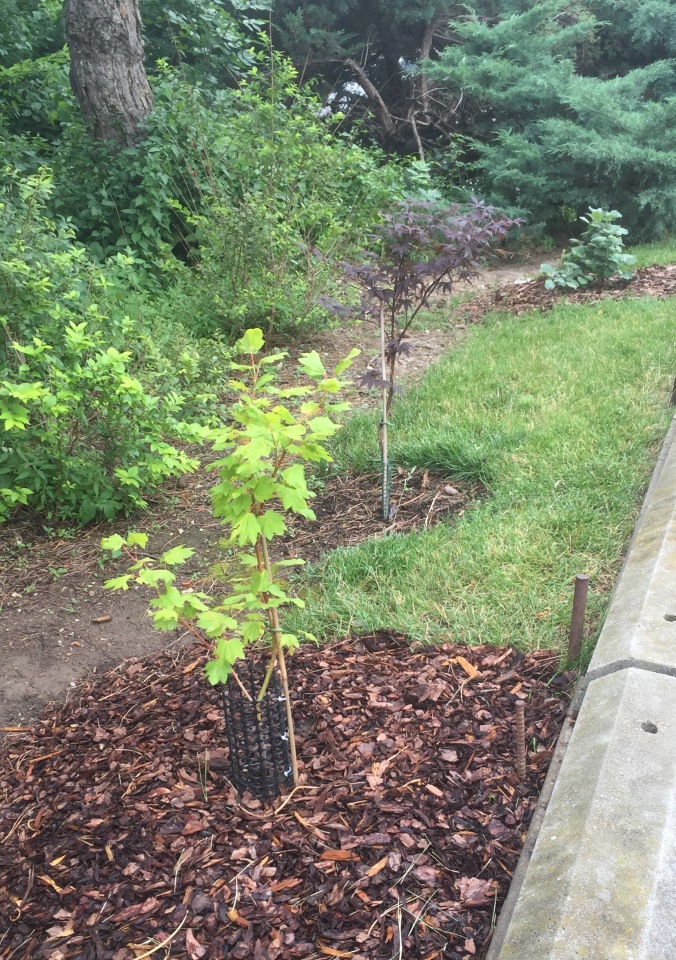 Right in front there is a Korean Fir tree. It’s a year old. These trees prefer more shady cooler weather, so it’s a bit of a stretch in this area. Mr. Ink had an elaborate set up to shade it last year. It grew not at all last year but this spring it’s got some new growth which is very exciting. To the right in the half finished garden bed is a black lace elderberry which has luckily tripled in size this year. And another interesting evergreen thing that I can’t remember the name of. There’s a whipcord toward the back under the hanging basket, not sure how big that is supposed to get.

And, that’s about it for today’s tree tour. I am slowly gathering all the tree photos for 2017. I’ve got one or two more to take and then I’ll be done. Sometimes I take a photo, and then think “This particular shrub will look better in a few weeks, let’s wait!” So, there’ll be more in the future.