Well, we had plans out and about last evening. Unfortunately, I am still recovering, and while I could have headed out last night, I got home and immediately fell asleep until Mr. Ink got home. He walked in the door looking pretty rough, and asked if we were getting ready to go. I asked him how he felt about it, and he said “I had a REALLY difficult day, and I am going to have difficult days for the rest of the week. What I would prefer to be doing is messing around with my rocks and doing backbreaking simple labor.”

Well OK then. Not how I relax, but it’s how he relaxes. We stayed home. I did feel considerably better yesterday. I had napped after work but didn’t immediately need to fall into bed at 9:30. I feel better again today, which is good because we WILL be going out to see Mr. Ink’s stepdaughter and her wife. It’s their 1 year anniversary, and it was recently her birthday. Plus, we haven’t seen them in awhile, and they have a new place to live that we want to check out too. And gifts, we want to bring them gifts for the house.

So last night I had a suddenly free night, and after wandering around the yard doing some simple chores like deadheading, weed pulling, and japanese beetle eradication, I decided it was cool enough to spin on the patio. The neighbor kids were out but I was feeling better so the extra noise was less annoying. I did some plying. 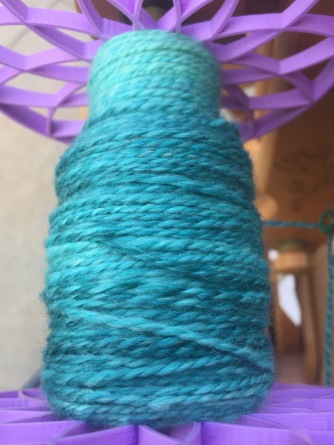 It was nice! Once Mr. Ink was done with his rock project, I told him to order food rather than cook, there’s only so much time in the day and he was exhausted. I guess I really should take a photo of the latest progress there!

It was a good and surprisingly relaxing evening, which was necessary I think. It’s nice to be finally feeling better! And rested. The best part? I did get my plying done, so I’ll be starting TdF with a fresh project on Saturday!