We didn’t! But most of the city did, with golf ball sized hail. Mr. Ink said “I think we might just thread the needle on this one.” While looking at the radar. 2 storms touching, and our friends to the north and south got hit so hard. We got massively heavy downpour but no hail. We were relieved, but I think it’s going to be another messy day for our city in clean up efforts. Seems to be a very stormy year so far. I used to get so excited about severe storms! But, now that I own my house I feel a bit less thrilled with them. Damage is a real pain in the butt.

There were amazing pictures on twitter from the area. Pictures of hail, pictures of broken car windshields, and home skylights. But my favorite? Pictures of glasses of bourbon with hail in them. Hah!

Mr. Ink had not looked at the radar before going outside and watering plants and spraying for weeds. He’d told me he’d be working on his rock collection, so I assumed that’s what he was up to and didn’t remind him of the impending storm.

I had decided to do three things last night. The first was finish the linen stitch scarf: 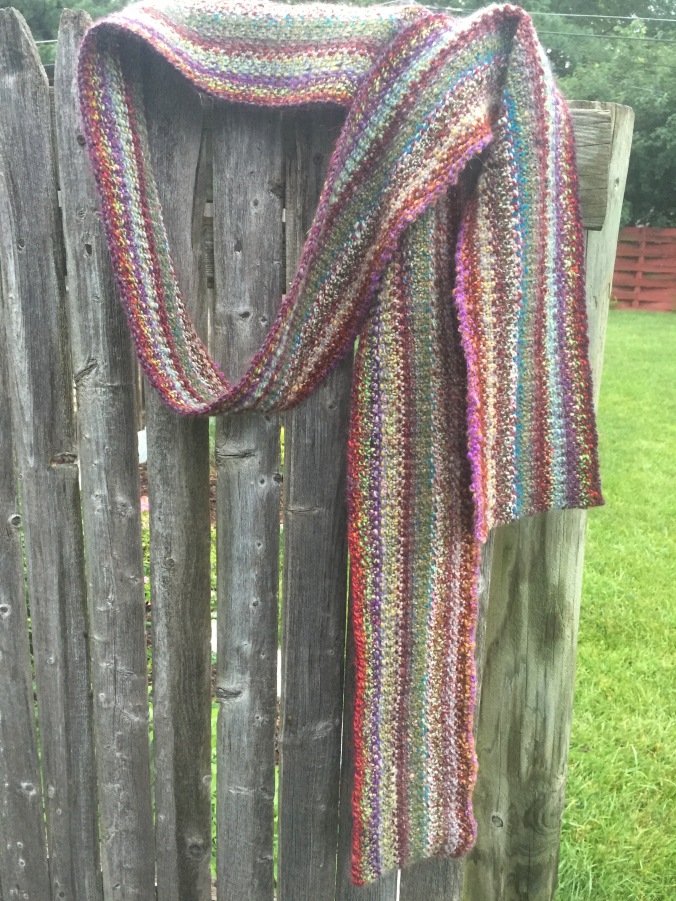 It’s washed and blocked even! It turned out really nice.

The second thing was to make pesto from the garden. I planted 2 basil plants and they needed trimming back. Now, I don’t know what possessed me to do this, but I made a huge batch of basil but I probably tripled the amount of garlic I typically use. I think this happened because as I was opening garlic cloves, I realized that they were sprouting badly. So I thought “Well, let me just get these used up!” And I did. But it was way too much, and left me with a stomach ache. So sad, because it was REALLY great pesto!

And the third thing I decided to do was to do some patio spinning.

This is the fiber I’d started on spindles, here’s the reminder photo of that:

I actually have about 6 spindles full now. I had originally said I’d keep this one as a spindle spin, but the reality is, I don’t love doing numerous spinning projects at once. I’d rather have a project on both spindles and wheel and then finish it up faster. So, I guess this is what the start of TdF is going to look like for me. Very green. Because I’ve got over 11 ounces of the stuff, which is quite a large project. And quite frankly, my next planned project is also green.

I told Mr. Ink I really needed to get it together today. I mean, I’ve got errands to run, Miss Butterfly comes home tomorrow, and I seem to have used feeling under the weather as an excuse to just put off all chores. So, tonight is my night. Errands, lawn mowing, and hopefully ironing and hemming new curtains. If I could get those things done I’d feel very accomplished.