So, I am in that slightly strange situation in which I actually have too many crafting photos. Too many things in progress. Too much too show off. I want to break them up into separate posts, but I’ve been sitting on a finished object post for half a week now! I still think I might save that post for the day I travel.

Once the very big green spin project was complete, I went to my stash to see what I had that I could use to create something fairly quickly. I chose a batt from fat cat knits. These are NOT my normal colors, but it’s actually good for me to get out of my color zone. 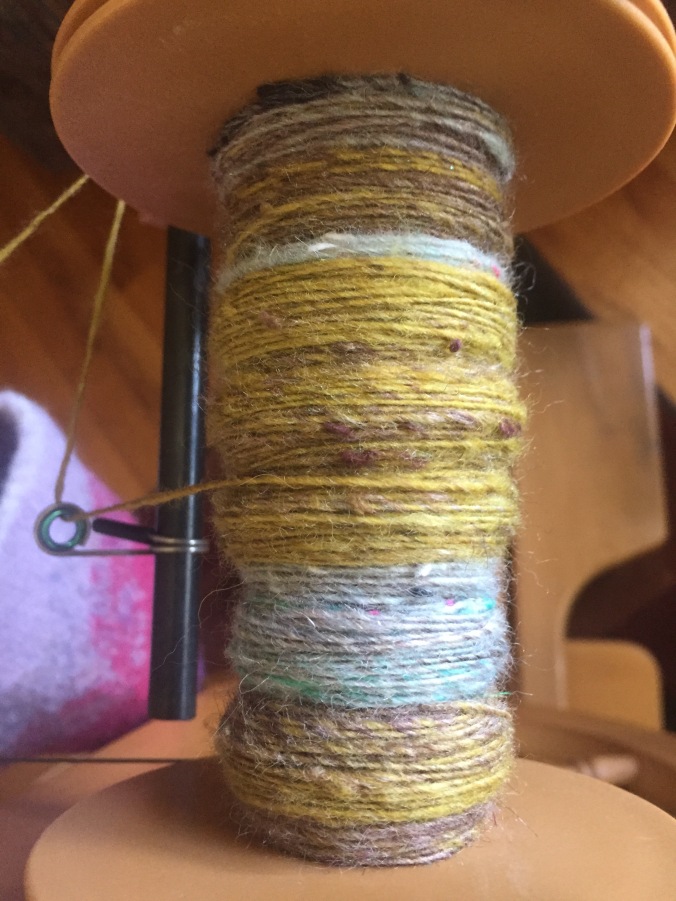 I began it on Sunday. I thought “How can I do something new with the color combinations in this batt?” Because it’s another gradient batt, and I am tired of making gradients.

I split the batt horizontally. Then, I took half that batt, and stripped it vertically, putting all those little strips into a bag and mixing them up really well. That’s what you see in the above photo. Randomly placed strips.

I then took the next batt half, and split it horizontally again. So that it would be a gradient, but it would go from yellow into blue and back to yellow again. I spun that. 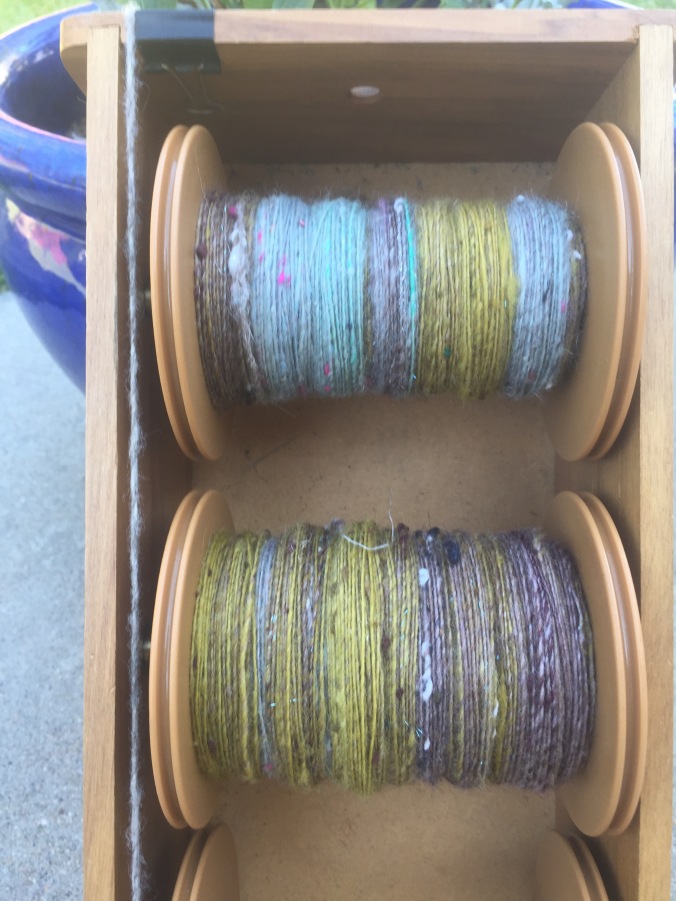 When I finished the singles, I realized that I had significantly MORE yardage on the gradient bobbin than I did on the random bobbin. Guess I should have weighed those halves to make sure they were even!

Our gardens are beginning to suffer. The lawn has gone into a summer heat dormancy, and we just don’t have enough rain. We try not to water our lawn, as we believe it to be a waste of water. But we DO have to water the gardens at this point, and it’s becoming an all evening job. So we’ve finally broken out the sprinklers, which do water the lawn as well as the gardens. But, it saves Mr. Ink valuable TIME, and that’s something as well.

Because of this, we had rather a nice evening together. Mr. Ink went out to begin the watering, then at some point he came inside and wandered around a bit lost. Then told me he was uninspired to do ANYTHING. Since he’s king of the yardwork, I told him he didn’t have to. Then he revealed the true problem. He’d been outside, in the heat, wandering around trying to find SOMETHING to do. He couldn’t think of anything but laying more pavers. He decided against that because he didn’t want to screw up his back before vacation. And he said “Why am I wandering around in the HEAT looking for something to do, GO INDOORS!” So he did. But he’s so accustomed to being outdoors that he really could not figure out what to do with himself. In the end, he sat himself down in the living room and talked. Wonder of wonders! It was quite a pleasant evening. And I stayed up too late because I was just so happy to be sitting around chatting with the guy even after dinner.

So all in all a very pleasant evening. Tonight I had better get my butt in gear and do some last minute shopping. The shopping list has been in my car, but I keep putting it off and making excuses. I am working on rather limited time now!