Here’s the last photo I can give you before the finished object photo on color craving. This is with the blue section done, but without the grey border and bind off.

I couldn’t stretch it out too well, as it’s only on 2 circular needles and since next step was to get it all on one circular needle and join in the round, I wasn’t about to add a third needle to it at this time. The good news is that I finished the border last evening, and I began casting off this morning. I am using the picot bind off suggested in the pattern. With one gajillion stitches on the needles, the 8 picot bumps I managed to make this morning feels pretty discouraging. I know it’ll get done, but at the moment, the bind off looms never ending in my brain.

Last night Mr. Ink and I mowed the lawn, while Miss Butterfly stayed in with Lizzie (she really doesn’t like being alone, that dog) and vacuumed the floor. After I was done mowing, Miss Butterfly headed outdoors, and I sat down on the couch with my feet up and a glass of ice water to cool off. Lizzie comes over to the couch, all excited. Bouncing and happy. I was like “What do you want? Do you want to get your toy?” She ignores the question. Then, she hops up on the couch, and for the first time ever, crawls all the way up on my stomach like a lap dog.

Excuse the gross mowing clothing, isn’t she a funny thing? She’s SO pleased with herself. This lasted like, two seconds because directly after I took this photo, Miss Butterfly took it upon herself to knock on the back door in order to get Lizzie all worked up, barking and growling. (This family thinks this is fun…) So, Lizzie used my stomach as a launching pad to jump from as she tore off toward the door carrying on. *sigh*

The hardest time we have with her is in the morning. I want her to stay in the room with Mr. Ink while I get my shower, then I can get dressed and take her outdoors. Unfortunately, Lizzie gets a bit stressed out when she knows that I am around, but she’s not with me. She gets up on the bed with Mr. Ink, which helps for a bit, but then she’ll get to whining and he’ll end up having to get up and take her out. She’s got a bladder of steel, so it’s not actually a matter of needing to go out. She just can’t stand that I am up and around and she is not. (Never mind that if she were out of the bedroom, she’d just be laying in the hall whining anyhow, she doesn’t know this.)

So last night we decided to try to keep her awake longer. She usually falls asleep in the living room soon after Miss Butterfly goes to bed, and then moves into the bedroom when I do. Last night we both got down on the floor with her and bugged her until we went to bed. She’d go to lay down, and her eyes would be shutting without her wanting to go to sleep. Like a little kid fighting it. Once we moved to the bedroom, she actually tried to use her dog bed as an actual dog bed. 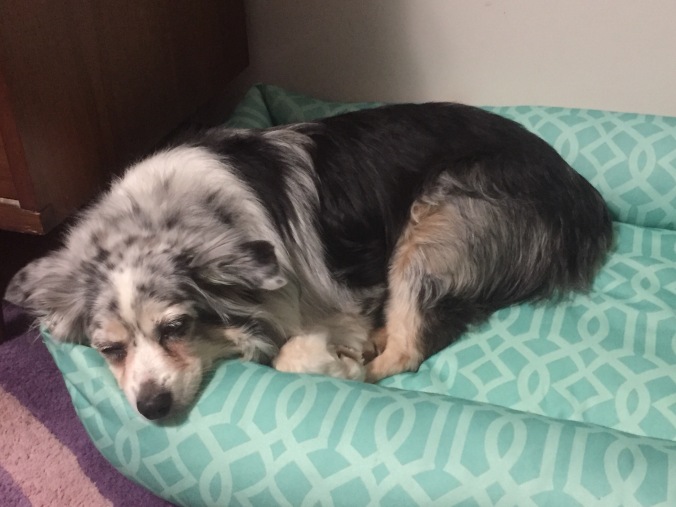 Fighting sleep again here. This lasted less than a minute then she was back on the hardwood floor for her sleep. But the good news? When I headed out the door for a shower this morning, I only heard one “STAAAAHHP!!!” from Mr. Ink, and when I got out of the shower she was still quiet in the bedroom waiting for me. Better. I guess we just need to try to revise her schedule a bit.

2 thoughts on “Last Before Finish”