I finished up another set of batts to replenish the fiber cabinet with. These have lots of fun add ins because I love all that stuff. They took me a few days to complete because I’ve just been working on them here and there in between everything else. 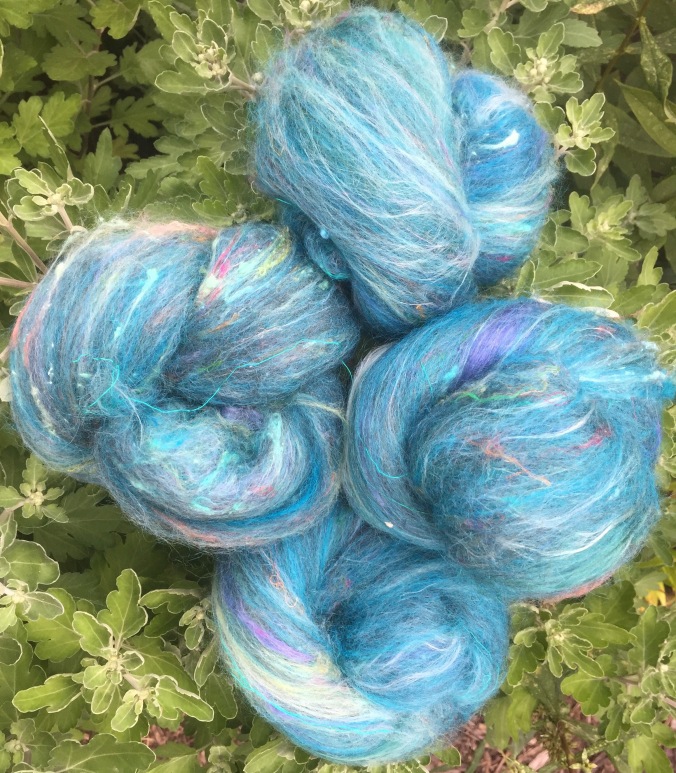 It’s funny, when I look at them I realize they look fairly close to the last set I did: 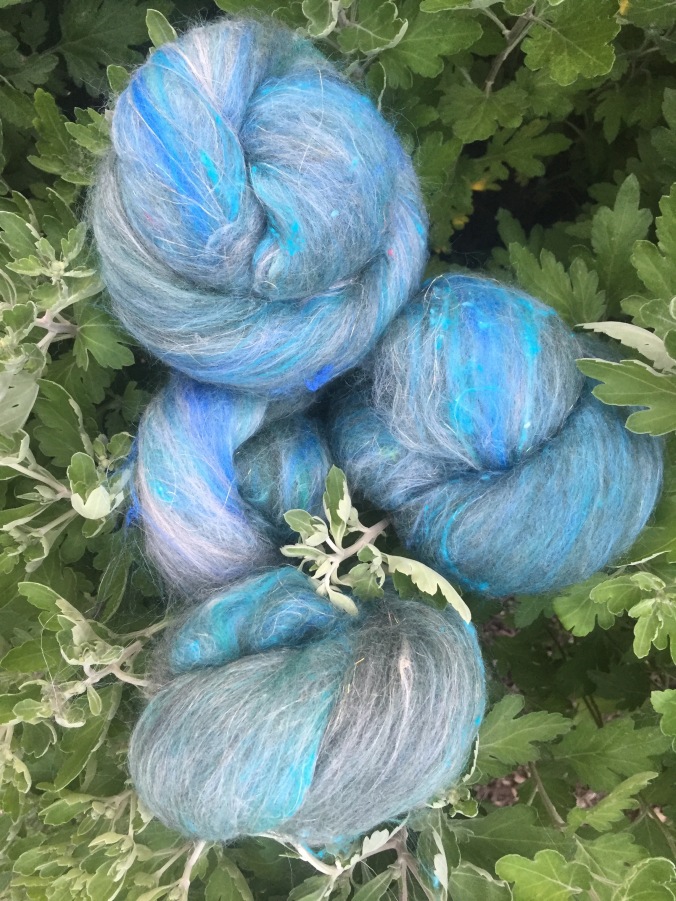 I think it’s the decision to start with a very muted base and add brightness. One was a grey romney dyed green, and the other was a grey romney dyed turquoise. With both, I added much brighter wools and silks. I guess it’s time to start moving away from the whole blue/green thing though, I need to add some different colors in there!

I don’t have more doggo pictures today, but I do have a funny little story. Now, Lizzie has been one of those dogs that is just not afraid of anything really. Storms don’t stress her out. She doesn’t need to retreat to a cave. With her, no one is a stranger, she’ll visit with any human or dog. Though…exuberant dogs overwhelm her and she wants her space. Cars are no problem, even when they are moving right along, which naturally worries me a bit! The most reaction I’ve ever seen out of her is when I open the extra lock on the sliding glass door in the mornings. It makes a rather loud popping sound, and the first couple times I put my foot on the lock to release it she flinched. Now when I put my foot on that lock, she just backs away and waits for it to be over.

We did realize she doesn’t particularly LIKE the vacuum cleaner. However, she’s a long haired shedding dog, so the vacuum cleaner is regularly run. Yesterday afternoon, I asked Miss Butterfly to get a good vacuum done on the living room rug. She did so. I guess Lizzie decided that was enough. She kept trying to avoid the thing, but it would just keep coming back into her space. We saw Lizzie looking like she was mustering her courage, and then she charged it. After that, she backed up, gathered her courage, charged the vacuum cleaner again, and bit it! Naturally, this set Miss Butterfly and I into fits of giggles! After that incident, there was no more charging and biting.

When Mr. Ink came home, I decided to tell him the story of the vacuum cleaner, and he had his own story. Apparently after 2 weeks in our home, she’s learned when Mr. Ink is heading to work. He’s almost always the one to put her in the kennel when he leaves for work later than the rest of us leave the house. So, now after 2 weeks, when he puts his big work boots on, she sees the boots and goes to get right in her kennel and waits for him to close the door. Such a good girl!

That’s it from here, hopefully there’ll be a spectra scarf to show off on Saturday. It’s done, but I was unable to get it blocked due to having gone on a nice long bike ride with friends last evening. I’ve a long list of stuff to get done this weekend that’ll make me feel like I’ve really accomplished something, and I am really looking forward to that!!! Have a good one!