I’ve been really into getting up early lately. Not sure why, though it may have to do with going to bed earlier, as Lizzie doesn’t really allow for quick after work naps. Anyhow, it seems like when I get up early, Mr. Ink isn’t too far behind. I got up early again this morning, fed Lizzie, grabbed a cup of coffee, and spent some time giving her all the attention she craves. Then I began my knitting. Mr. Ink decided to get up too, and Lizzie must have forgotten that he was in the house, because she hears someone in the bedroom and begins barking/growling/carrying on. Except, while she isn’t a fearful dog, she’s not particularly courageous either. So, instead of going to check it out, she jumps up on my lap and tangles herself all up in my yarn, continuing to bark and growl.

Mr. Ink comes into view, and she realizes what has happened, but now it’s just fun to bark and carry on, so he begins playing with her. Now she’s tugging and keeping her toy away from him and snapping at him, and he’s laying on the floor just continuing to work her up. She’s carrying on, and alternating between that and ripping the stuffing out of one of her toys, Mr. Ink and I are laughing so hard, and Mr. Ink says “She’s playing a little rough this morning!” I look at him with one eyebrow raised, and he says “Yeah, ok. I guess I started it.”

It was a fun dog morning. I also got a photo of the spinning I am working on. 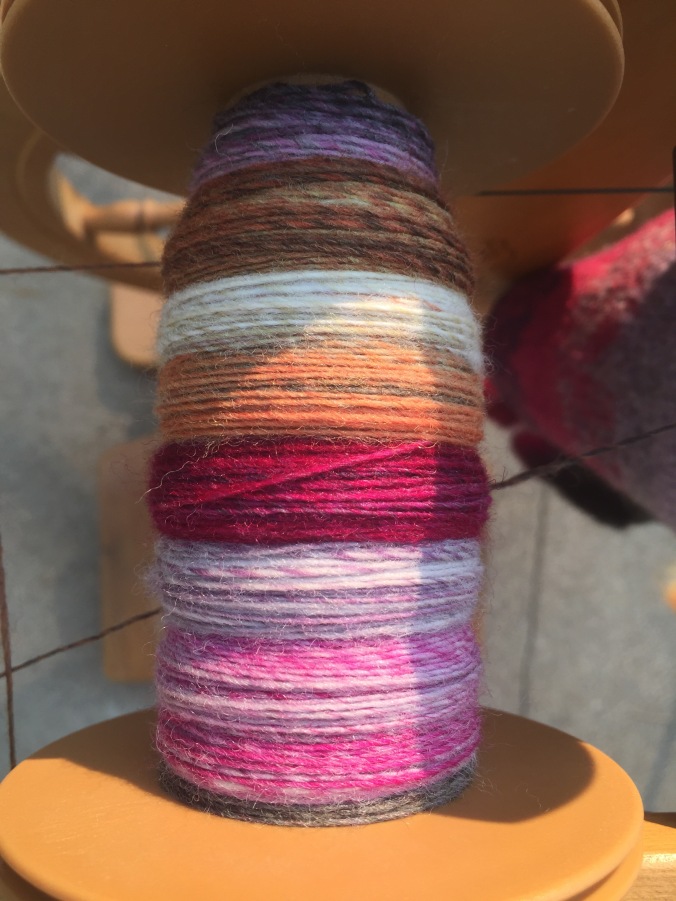 This is dyeabolical’s 10th anniversary colorway on falkland wool. I think it’s going to be gorgeous. I am just working on a fractal 2 ply for this one, keeping it pretty simple.

Lizzie did have her spa day yesterday, though she’ll have more of it today since her undercoat rake arrives today. We worked on the fur growing between her pads using Mr. Ink’s old beard trimmer. It worked pretty well! She wasn’t too upset about it, though did grow a bit tired of it. She really doesn’t mind being handled by us at all, which is so nice. I tried giving her treats during the trim, but in the end those just distracted her and made her super wiggly, so we saved them for after the job was done. She’s lost close to half a pound now, which is right on target with what the vet wants, it’s not quite been a month. Also, the next two meals with added beans she dug right into without flipping the beans out on the floor, I guess she likes them!

That’s about it from here, I am about to go work on my weekly to do list, really hoping to have that completed by Monday!