So then I had a picture to post, but couldn’t get my wordpress app to work!

I started and then finished something without ever posting about it on the blog. I needed a palette cleanser. Something that wasn’t tiny lace that required chart reading. And I found a simple scarf pattern called Flatlander. Knit horizontally, it was one of those knits that was both mindless and fast, due to rarely having to turn my work around.

I used some of Miss Marja’s handspun from my stash, a wonderful pink based yarn out of a great big batt she spun and I found I had my eye on right from the start. Here it is! 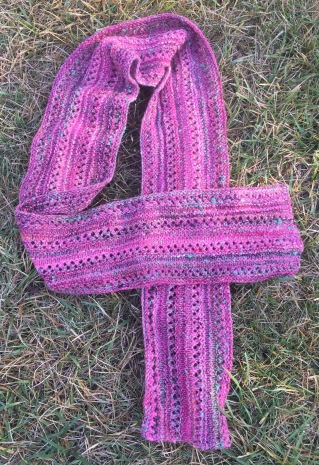 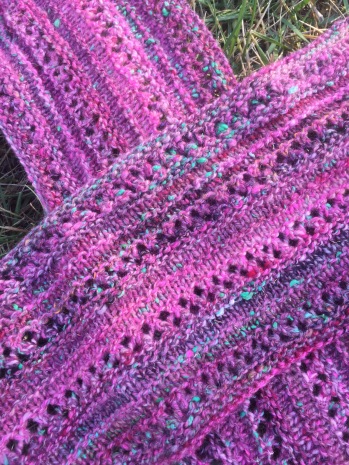 With that done, I got more than another full repeat of Miss Marja’s colorful scarf done, and then some. Now I am on to some other knitting.

We were supposed to be on vacation starting Friday after work. It hasn’t quite worked out that way. Mr. Ink had to go in on Saturday, and unfortunately he’ll have to go in on Monday as well. He doesn’t get that vacation time back, so that’s irritating. I AM actually on vacation, as far as I can tell, so it would be great if I’d quit thinking about work. Hah.

Mr. Ink has had a few days of those terrible awful no good very bad days. You know the ones. Where you feel like someone must be out to get you because everything that could go wrong does so. The one I find the most amusing, is that he got rear ended when he was attempting to stop for a stop sign. The car is ok, though there’s an imprint of a license plate in our bumper. However, when he got out of the car, the woman who hit him said “Huh, must be something wrong with my car, usually my radar thingy prevents this from happening! I’ll have to take it in to the dealer.” Mr. Ink told me this response, and I was just like “WHAT?! That’s not how you even DRIVE!!!” Completely fascinating response. In any case, we aren’t going to make a fuss about this, but I do think it would be HIGHLY interesting to tell that response to our insurance company!

I would make a fuss if it was the new car though. Yes I would.

I’ve got the next 4 days off. Lizzie isn’t going to know WHAT to do with me! But, she’s been a pretty happy doggo that we’ve been home. I have filled my time with bits and bobs but nothing huge and exciting, so it should be a very pleasant vacation.