I have no pictures of the firepit progress because that got worked on late in the evening. This morning was too dark for a photo, so I’ll grab a photo when I get home tonight. MUCH has been done, and Mr. Ink worked well after my bedtime on it.

It was rather an eventful evening at our place. I ordered pizza late because Mr. Ink wouldn’t stop working. I got the cash ready for pizza delivery, opened the front door and turned on the lights, and heard a large bang. Mr. Ink was coming around the corner at that time, and saw what happened. A car on our busy street had hit a raccoon really hard. The car didn’t stop. A cop was behind that car, and took off after the car, I am assuming because it didn’t stop. But now we’ve got a raccoon in front of our home, still alive, but not moving much. Mr. Ink decided he’d better move it, I told him he’d better not do it with his hands, we do not need a raccoon bite on top of this. He went to get a shovel, and thankfully during that time, no other cars hit the poor thing. When Mr. Ink went down there with the shovel, the raccoon hauled himself up on the side of our yard and went back down. So, we decided to call animal control. It sure looked like it was hurt, and we didn’t want it suffering and dying in our yard.

Animal control showed up about half an hour later. We’d kept an eye on where he was, though he was moving about a bit. The animal control officer went to take a look at the raccoon and the raccoon ran off! The officer observed it for a bit, and then told us he wasn’t going to catch it, as it seemed to not have any broken limbs. He told us that sometimes they are just really stunned after getting hit, it looks alarming, but then they turn out ok and it is their policy to let them be, which I totally agree with. He told us what to look for in order for him to need a call back, like the raccoon hanging out in our yard during the day.

So, quite an eventful evening overall. The day was lovely, though hot. Mr. Ink actually spent a good portion of the day dealing with his new japanese maple. He’d purchased a very large one, only to find that it was completely root bound in its pot, and it may have been a bad decision. He treated it with the type of aggressive TLC he treats all plants and trees. Meaning, he took this terribly root bound plant and basically cut away all the bad roots, gaining 8 additional inches of height on the tree, so poorly had it been potted and left that way. When we purchased it, 3 men could not lift the pot into the back of his truck, it took a skid loader. When he was done, he was able to lift the tree himself. 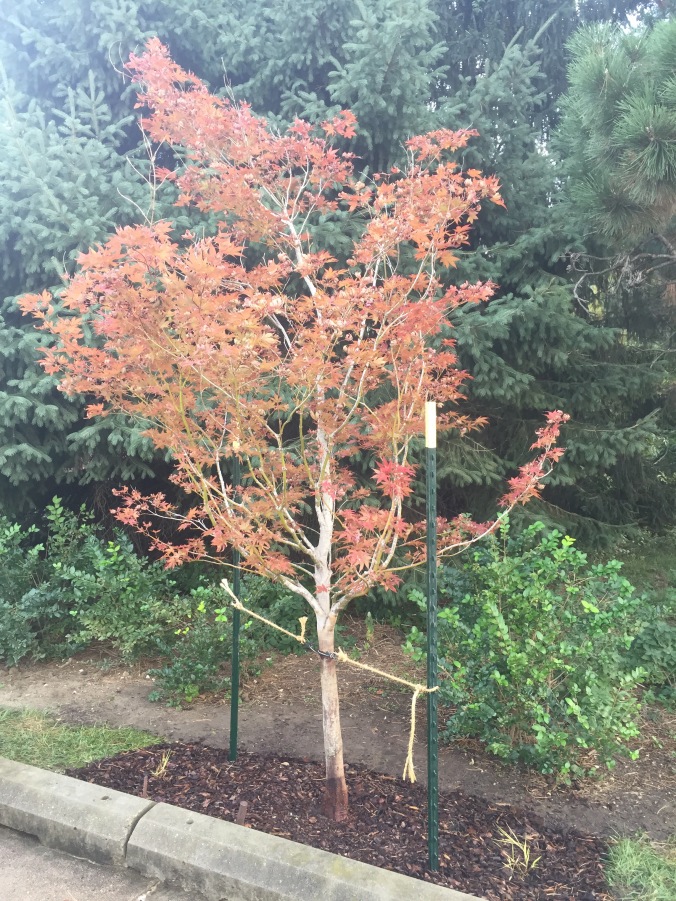 It’s now in, and hopefully it will appreciate its new home, and work on rooting itself in the soil. I suspect it being tied up will be very necessary in the upcoming months. There’s just so little root system left on the thing. It is pretty there, against the neighbor’s evergreens! It has a look about it like evening sunlight is lighting it up, even when that’s not the case. When evening sunlight is lighting it up, it’s completely stunning.

I will try not to be too bitter about the fact that Mr. Ink removed a bloodgood japanese maple from that exact spot, to add this maple. The small maple he removed we’d been nursing along for the past 2 years, so I would like to find another spot in the yard for it. Of course, no spots are in “the plan.” It might be time for a tree diet, like a yarn diet. One cannot change up their trees every 2 years!

In other around the yard news, last year Mr. Ink purchased me some gorgeous deep red mums. Let’s see if I can find last year’s photo. 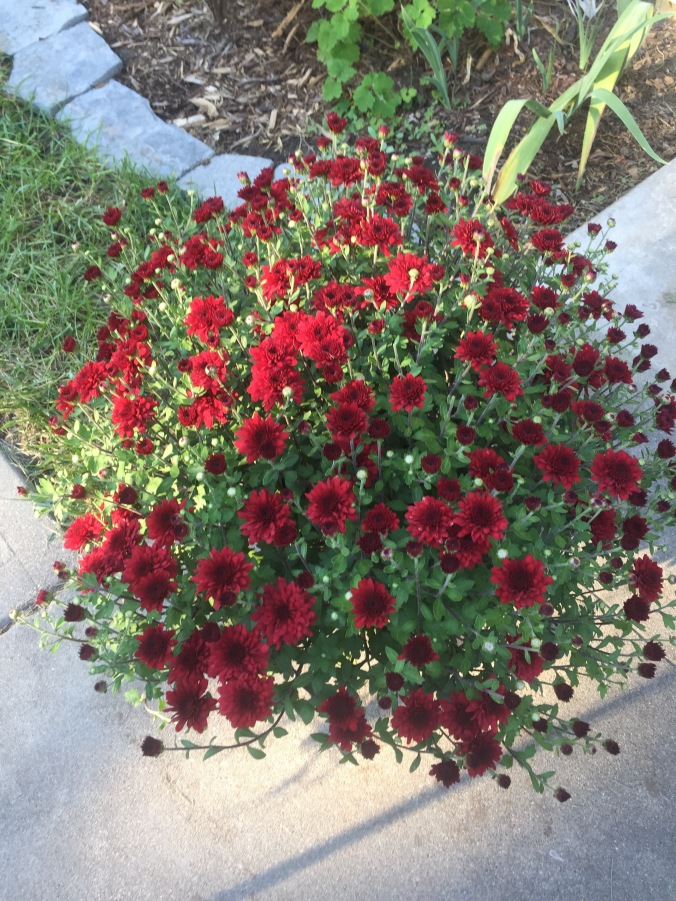 There it is! Well, once they were done blooming, I replanted them by Coco’s memorial tree. 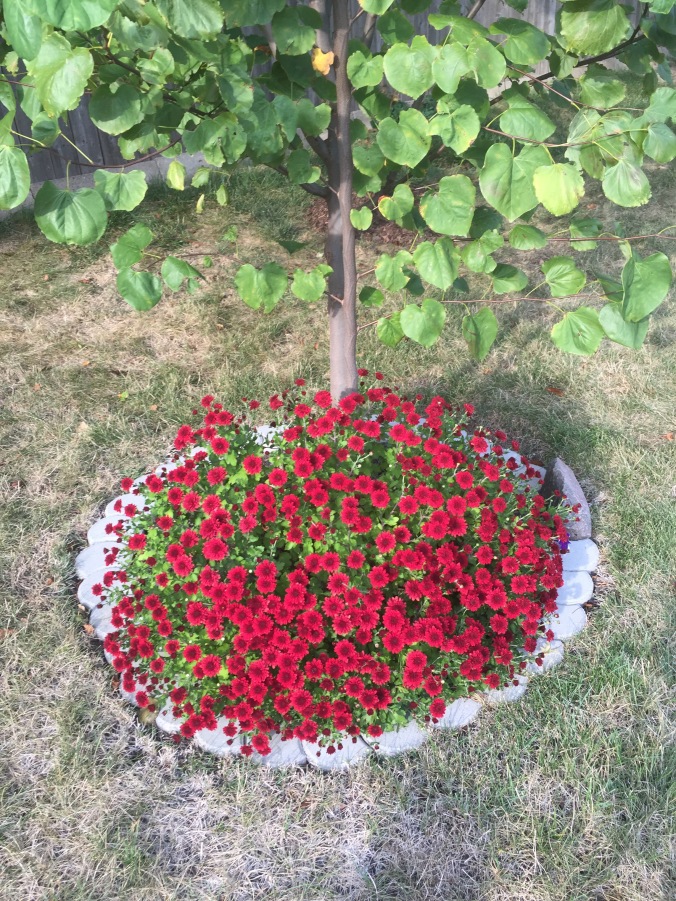 And they have just been gorgeous this year! Now, I am finding that area to be a bit difficult overall when it comes to appropriate flowers. I get some spring flowers, as I’ve put bulbs in there. But, while last year I had a whole host of petunias going nuts in there, this year’s petunias didn’t really produce. I suspect this is because the redbud has filled out beautifully and it’s just too shady for them. The mums though, they are loving the afternoon sun and the heat. I’ve got some pink mums in another area of the garden, I think I’ll replant some of those in this garden bed, and maybe pick up some purple ones this year too, that can go in there. Then I’ll just have the spring bulb display, and the fall mum display, and be pretty happy.

We’ve got orange mums starting to bloom on the front bank as well. I couldn’t remember for the life of me when we got those. Then, all of a sudden it hit me. Last year I’d been to a grocery store late in the season. There were free plants, including orange mums, in terrible shape. I brought some home, of course, because we would run a plant rescue if we could. Looks like Mr. Ink took that one pot, split it in 3, planted it on his front bank, and now has 3 lovely bunches of orange mums coloring the front bank! Good deal for free flowers!

Know what I did yesterday? I finished the body of my vest. I know, I am knitting very exclusively right now! I sewed up the shoulder seams this morning and tried it on. Looks like it is going to fit absolutely beautifully! Salpal1– I’ll have you know that I took your advice and experience and applied it to my vest by decreasing all the way down to the size smaller than the one I was knitting once I began decreasing for armholes and shoulders. Seems to have worked well! So, now I just have to finish neckbands, armhole bands, and buttons. So close!

That’s all I’ve got around here, just a few tree photos and a story or two. Heading into the work week with anticipation. This week and next is a grants deadline, AND, on Friday I get my own office. Crazy stuff happening around here this week! Hoping to do some serious clean out of my current space in order to make Friday’s move a bit less tedious.