Sometimes I wind handspun into a ball with the intention of using it immediately, and then it sits for ages as I wander off to another project. Does anyone else have that experience? It annoys me, quite frankly, to have full skeins in caked form hanging around. They don’t fit nicely into my stash that way, and end up falling on the floor or being housed elsewhere in the house looking sloppy.

I had three of those hanging around recently. The first was the cowl I posted yesterday, and the second ball of yarn is the cowl I have to show off today. 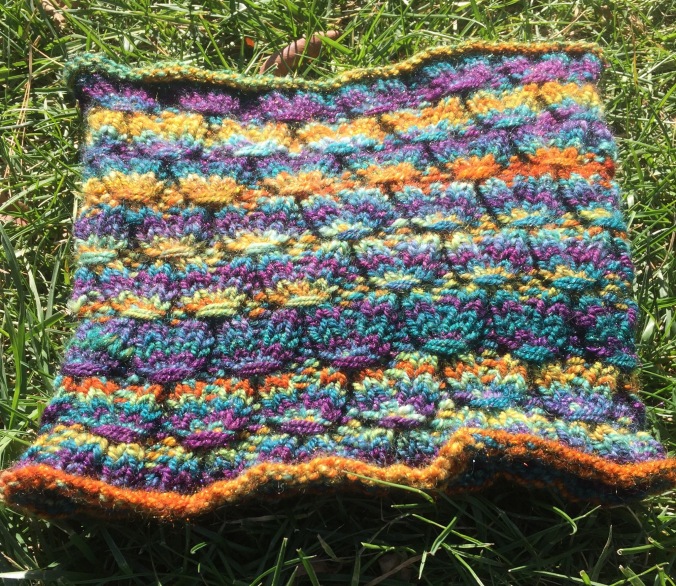 Pattern is Ziyal cowl, and this is the first time I’ve done a smocked stitch. It was great fun, and far easier than I imagined. The yarn is handspun from dyeabolical’s flower shop inferno colorway. The base had a high amount of firestar in it, so it’s quite sparkly on top of the rich saturated colors. This project absolutely flew off the needles, it only took a couple of days and even then, I was knitting quite a bit on other projects.

My weekend alone is drawing to a close, I go pick up Mr. Ink in a couple hours. It was quite pleasant, but he’s right, I don’t do a very good job with my eating when he’s gone. I sort of just ignore the whole concept until it’s late, I’ve a headache, and I am grumpy. At which point making something makes me full of rage. It really is better when he’s home to keep us on schedule. I did also get a little bit bored by the end of the night, even though I’d kept myself well occupied. I used to be so good at being alone!

Miss Lizzie has enjoyed her time though, specifically taking up Mr. Ink’s side of the bed. She may be a little perturbed to lose her new spot. But, each evening from 5:15 to 6:30 she’s spent laying at the door waiting for him to come home at his usual hour, so maybe not too perturbed.

That’s about it from here. Tomorrow I am going to try to remember to start posting weekly lists again, in order to get organized at home and settled into a new routine now that the most insane part of my work insanity seems to be over.