I don’t have any crafting photos today. I blocked my sweater last evening. It looks great and looks like something I’ll get quite a lot of use out of. Hopefully as much as my boxy and buttony sweater which I am wearing today. Yay cool weather! I did begin a vest out of bulky yarn yesterday. However, I restarted it 3 times because I didn’t bother with a gauge swatch. Plus, it’s one of those items that I am knitting so that yarn is no longer sitting in my stash, moreso than something I am excited about actually wearing and having complete. No photos yet, but it should be a fun cabled thing to show off once I really get going. First there’s what feels like miles of ribbing to get done.

I had a but of a mix up yesterday. I’d decided to look for buttons online for my new sweater. I am rather partial to czech glass buttons. I know they are typically a larger size but I thought I’d go hunting for ones small enough for my sweater. I thought I had found some, and ordered them. Only to realize after the fact that they were listed incorrectly on the website. So, a refund was asked for and received. This morning I went back to look at the same site, as their customer service was great, and found some buttons I believe will work. So now I just have to wait for them to come in. 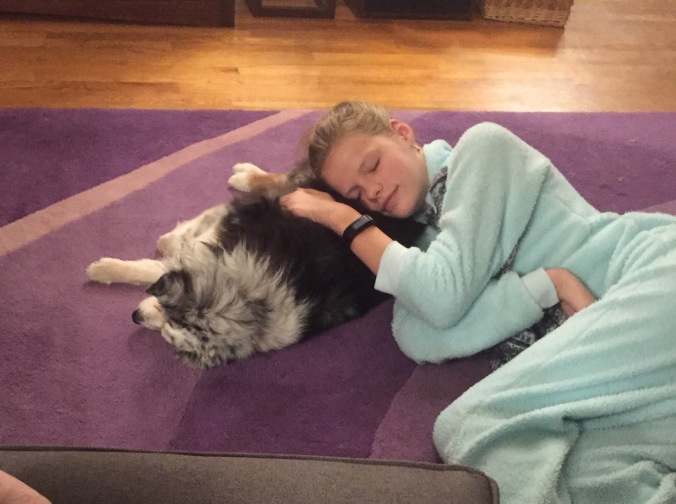 I think I mentioned, in passing, that Miss Butterfly was quite ill for awhile there. I don’t think I went into great detail though, as the week was very busy for me, and with her being sick on top of it, there was very little blogging time to be had. In any case, she had a fever for a solid week, missing an entire week of school. The above photo was taken on a Monday morning before I knew she was sick. I just thought it was sweet that she was resting on her doggo. It wasn’t too much time later that I realized that she had developed quite the fever. I suspect she had the flu, with that long fever and her body aches. “It hurts to move mom, every muscle hurts!”

Lizzie Bean played nursemaid all week, hanging out with Miss Butterfly when she was sleeping and resting, and entertaining her in the brief moments she felt a little better. Then when I’d get home, Lizzie would get a break, and I’d be the one to fuss.

Here’s Lizzie taking a break on her “throne” which is my ottoman. With the old couch, I used to sit on it with my feet up, and Lizzie would lay at my feet on the couch sometimes. Now? The ottoman isn’t large enough for both my feet and the dog, so when she decides she wants up there, I have to decide I want to allow it.

Anyhow, Miss Butterfly missed a week of school, which then put her very far behind in her school work. Her grades are a mess, and we are working on it now, but it’s been a week and a half and we aren’t there yet. This combined with my irritation at her use of her phone has led to a moratorium on phone use in the evenings as well as friend time in the evenings. If her grades go up, we’ll reconsider. Once her schoolwork is done in the evenings, she’s gotten down to business cleaning her room. It’s been great. And I think she’s learning that everything gets done more quickly if you aren’t distracted by what is going on with social media. In fact, she came out last evening positively glowing over the fact that her room got done so fast and looked so good.

The agreement was that if her room got done, she could go with Mr. Ink to shop for a used desk for her room. She’s convinced him that this evening is the correct time for that. So, they’ve got a shopping date tonight. She was so excited about this that she could not stop talking all evening long. It was nuts! Or, that too may be a result of no phone use.

Here’s another phone use story. Miss Butterfly came to me last week in great distress because a friend had posted on social media that she’d been shot while in a car with her family. I immediately reacted with skepticism. Miss Butterfly didn’t understand why I wasn’t getting her level of worked up about it. Miss Butterfly told Mr. Ink. Later on, Mr. Ink came to me and said “Did you hear what happened to her classmate?” I again refused to rise to the level of emotional involvement they were requesting out of me. I heard nothing more about it for a few days, so I then asked Miss Butterfly about the situation, and she said “Oh, my friend said someone else was posting from her account. It never happened.” Which led me to a lecture in how we can’t believe everything we see on social media and we need to stay skeptical until there are facts involved. Later on, I told Mr. Ink the end result of this situation. He said “You had this figured out all along! I was trying to understand why you weren’t more concerned about kids being randomly shot in cars with their families in our neighborhood!!!”

I think that’s about it for stories from me today. Just a few more Lizzie photos. She’s gotten in the habit lately of hopping up on the bed for a short time when I go to bed. She waits for Mr. Ink to come to bed, and then gets back on the floor. However, this weekend when I made the bed after washing the sheets, she decided NOW was the time to get on the bed. 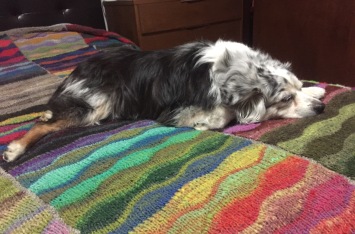 Apparently she’ll never get on a dog bed, but our bed is just fine.