I went to pick Miss Butterfly up from her grandmother’s home yesterday. I’d told her since it was small business saturday, we could go to yarn shops if she’d like. She said I could just go on my way to pick her up. I had thought I wouldn’t, but I did hit up two out of the three on the way out there. I bought a ball of yarn at one, which led to a very long period of time in line so I ended up picking Miss Butterfly up almost half an hour late. I still wanted to get to the third shop, so I promised her a trip to a local coffee shop if we could stop at the third shop too.

We stopped for coffee (smoothie for her) and then hit up the third shop, which is my absolute favorite. I got my name entered in a drawing for a prize, and Miss Butterfly drew 15% off for me on the 3 bumps of malabrigo nube I picked up for another combo spin.

An aside about that, I keep saying that I won’t purchase nube anymore. It arrives so compacted and a bit felty around the edges. Certainly not the perfectly prepped top that I get from all our wonderful indie dyer shop owners. I guess the colors really get to me. After dividing those 3 bumps for the combo spin yesterday, I am renewing my vow. It’s irritating. But the price is really good, especially with 15% off.

We got home, Miss Butterfly wanted to have a friend over so she walked Lizzie to pick up her friend. And then about an hour later she made the friend go home because she said she wasn’t feeling well. Ever since then, we’ve been doing another round of tummy bug for her. It’s been awful, the poor kid threw up every 20 minutes 11 times (by her count, I couldn’t keep counting.) But no fever, so there’s that. But she’s pretty miserable, and extremely annoyed since just a month ago she was doing a week with the flu. She’s had a mostly sleepless night but this morning the worst seems to have passed, and she’s dealing with the after effects. I don’t know if she picked up some food poisoning at her grandparents home or what, but I do hope it passes quickly as we’ve only just gotten all her grades back to normal after the last illness. We’ve really had more than our fair share of sickness this fall, I really hope it all ends soon.

So, our day was interrupted, and today probably will be too. Unlikely we’ll spend today putting up the tree and washing the dog and taking her for a long walk. Just…rest today.

So, here’s some pretty handspun for today. 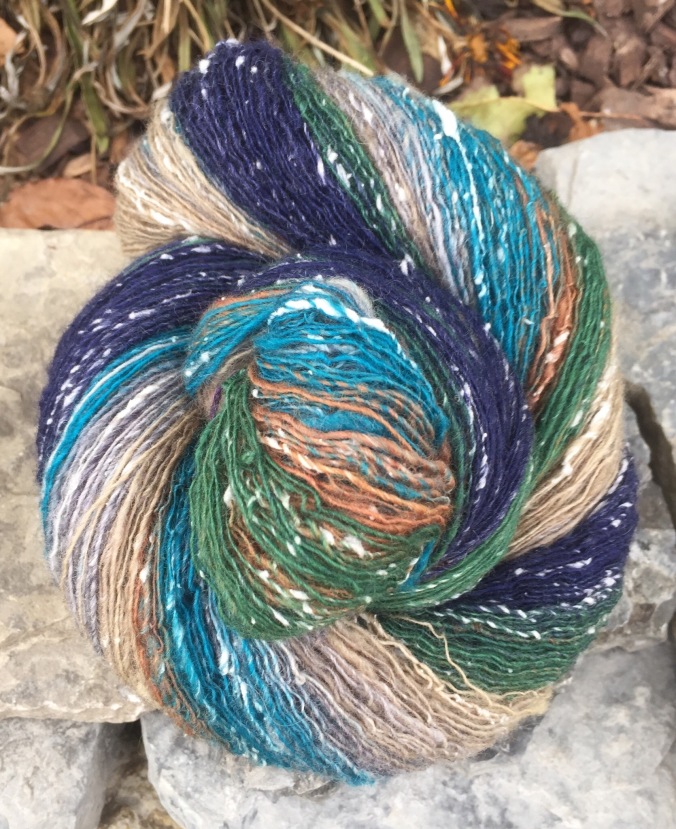 This is a classy squid columbia batt spun into 937 yards of laceweight singles. These were spun on my rose, and are more on the energized side. I’ve come to the realization if I want good, low energy singles, the prelude is my wheel. If I want great singles for plying projects, the rose is where it’s at. But, for real, both wheels are fantastic, and I am really enjoying them! I had no idea that I really did “need” another wheel in my life.

Would you believe I’ve already got two more finished skeins to show off in the upcoming days? And more on the wheel as well. One of those finished skeins is even one I chose to spin from knitter’s book of yarn designs. So, it’s more interesting than your average handspun as well. I guess my vacation has been highlighted with spinning unexpectedly, and I like it, I really like it!