I’ve been having some problems with wordpress lately. Like, sometimes it posts stuff I had no intention of posting, but those posts are also…nothing posts? Like, it seems like there should be photos but they don’t show up. When I view them, those posts don’t even look like they exist. So they are hard for me to even notice. Except, sometimes Salpal1 finds them and comments, and then I know they are out there. But, when clicking on her comment, I still can’t view those posts. It’s so strange.

And then there’s this. I was trying to update my knitmeter tally, since I hadn’t done so before thanksgiving vacation. And, we all know how much knitting and spinning I managed on vacation, tons! I went down through all the visible posts, and guess what? I can’t find my finished venomous tentacula photo. Did I not post it? I feel like I absolutely did, and I also feel like I remember reading comments about it at some point! And while thanksgiving vacation was a bit of a blur with two GI sicknesses that week, I don’t think I am totally crazy.

For posterity’s sake, here’s the photo. 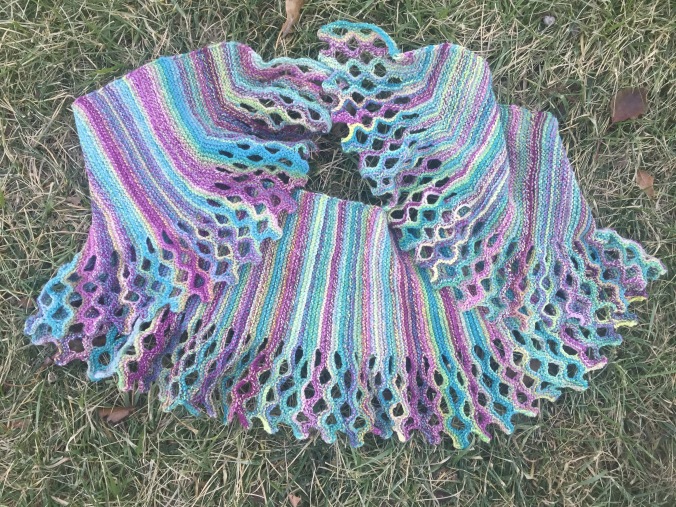 It’s done. I swear I posted it. But maybe not. Anyhow, it was a fantastic knit, I am sure I wrote that before too. It’s been too warm to wear it so far, but it matches so much of what I own.

In other news, Miss Butterfly didn’t go hang with her dad last night so she and I watched Doctor Who and I did some spinning. Mr. Ink went to his show, and I stayed home messing around with my new handspun. I began a scarf called Bias Scarf with Ribbed Cables. But, while I really LOVE the pattern and do think I’ll knit it at some point, the very sparkly yarn just made everything look terribly busy. So, I ripped it out this morning and began at Ameeta Scarf, which I think will be really nice. Once I’ve got a bit more done on it, I’ll grab a photo. I also need to get a current in progress spinning photo.

On Thanksgiving day, we took Lizzie to the dog park. Unfortunately, I am beginning to believe she picked up a case of kennel cough. It was really disturbing before I figured out what might be going on! But, now that I know it can be like a cold, I am less anxious. She’s eating and drinking just fine, so hopefully it’ll resolve without a vet bill. And I guess next time we are at the vet, a vaccination will be in order.

And that’s it from here, it’s been a really busy Friday so this is getting published far later than usual. But tomorrow is Saturday, and MAYBE I’ll be able to get a shot of a sweater finished weeks ago!