Well, I ended up calling the vet yesterday about Lizzie. The bad news, yes it sounds like kennel cough. The good news? She was vaccinated against it. It’s like the flu shot for humans, dogs can still get it. But their bodies are more easily able to fight it off. The vet said that she needs rest and we should keep her calm. While she was saying this, she was also laughing, because she understood the absurdity of the idea of keeping Lizzie calm. No walks. No jumping. Hahahahaha! She’s got an appointment set up for next week in case she doesn’t get to feeling better. Thankfully, this morning she already seems better. Though still congested, as it was indicated to us early this morning. She is the type of dog who WILL get her needs met. She needed to go out, but Mr. Ink and I were still sleeping. So, she does as she always does in this situation. Jumps up on the bed right in between the two of us and runs all the way up to our faces. Unfortunately, this caused an epic sneeze, so Mr. Ink and I started our morning with faces full of doggy snot. I can honestly say, I never imagined that happening to me. Ever.

Since we’ve been plagued by illness all fall, it’s no surprise that Lizzie would pick something up too I suppose. But it is frustrating!

I began my ameeta scarf yesterday, and am a few repeats in. Far enough to show off the beginning I think. I am loving the pairing of the handspun, the sparkle, and the texture. 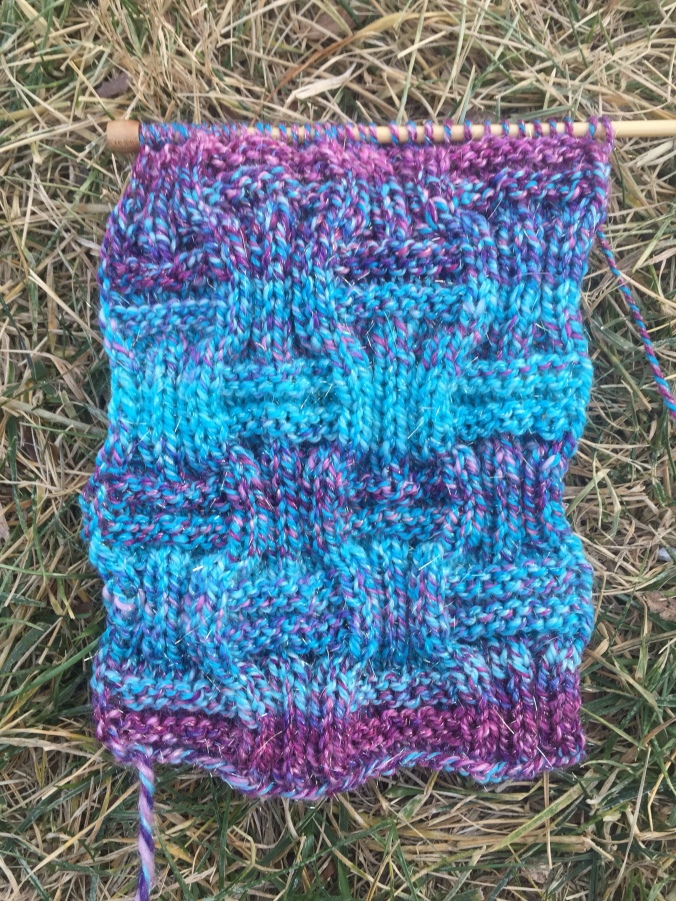 It’s really soft too. The kromski spins a nice soft yarn for me, as it’s just a bit slower than the rose. The rose is great for sock yarn, the prelude is perfect for scarves.

In other news, we’ve joined the instant pot craze around here. We received ours last evening. I did the test run, and than immediately made hard boiled eggs. Today it’ll be yogurt. After that, I’ll start exploring low carb meals. Mr. Ink cooks really well, but his repertoire of low carb meals is getting really stale since we’ve been on it since February. Getting sick of our meals causes us to cheat, and then we aren’t enjoying the benefits of it at all in the end. So, now it’s time to expand. I am also going to try making low carb crackers today, that should be interesting. We’ll see how it goes.

And that’s all for this Saturday! Have a great one!