I admit it, I think the best christmases are the ones which have snow involved. So waking up yesterday to the news we were to get snow was absolutely thrilling to me! It snowed on and off all day, most of it not sticking much, though it did help to cover the remaining ice making it easier to walk Lizzie. I worried that I was getting my hopes up, but in the morning? We had a nice cover. Would I have liked a lot more? Heck yeah, but we did well and I am happy with what we got.

I made a loaf of homemade spelt grain bread last evening and Mr. Ink made chili so it really was a warm and wonderful evening. I never did finish that cardigan, I gave up with half a final row to knit and then a bind off. I got up at 6 this morning to do that and enjoy a cup of coffee in the quiet by the tree.

The cardigan is now blocking and I’ll get to wear it to work on Tuesday. Yep, that’s right, I have to work but just the one day. I am hoping to get photos that day as well. And, in January I am setting myself a challenge. I am going to start actually wearing all the wonderful sweaters and cardigans I’ve made over the years. I just sort of forget about them sometimes and it’s kind of silly. I might need to rearrange so that I can get to them easier in order to wear them.

Once I finished the cardigan I realized that left me with just one sweater amount of yarn in stash still. That’s it! Except…I tried to knit it into something and realized a key thing. That yarn is not destined to turn into a garment. I just don’t like it in garment form. I’ve tried multiple times. It’s going to have to be something else. My plan now is to very carefully decide on yarn and pattern combos. Nice yarn with a good pattern only. Not find a cool pattern and get the cheapest yarn. I am going to start on Wednesday actually, I’ve a sweater in mind and I’ve been itching to make it for ages.

I did also start the next 3 braid combo but haven’t gotten far at all. I yanked out another beginning of a handspun scarf I didn’t like. And now I am wandering around online trying to figure out what to knit next.

I did get a nice long walk with Lizzie in today, she has no problem at all with the snow but may need some booties. We would walk until she’d get a piece of salt or a ball of snow between her paw pads. Then she’d come to a complete halt, and hold up that paw until I dug it out. There was no limping along, there was no hiding it. She would just stop. Again, not one to be particularly shy about getting her needs met. 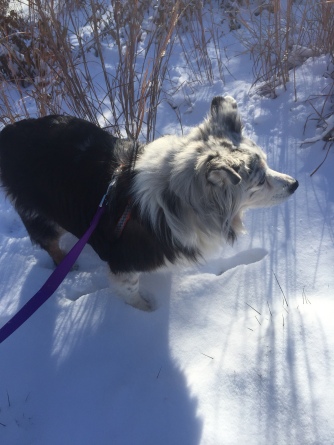 Miss Butterfly is having her weekend with step family and dad’s family. Apparently she’s gotten a ton of stuff related to painting nails so far. And, that prompted the following text exchange, which was so indicative of her age and stage.

Butterfly: Why did you tell everyone I wanted stuff to do my nails?

Butterfly: I don’t DO my nails, YOU DO. So I can’t see why you told everyone that.

Me: I didn’t. I talked to one person about what you wanted, that’s your step mom, and I told her make up and bath bombs. I didn’t say anything about nails.

We are definitely at the age of everything is mom’s fault right now. I mentioned that if she wanted specific stuff she needed to communicate that with her family. I got a “Well it’s HARD!” out of her. Then I reminded her that I have extremely little control over what happens on her dad’s side of the family. I do however hope that she gets some cool stuff tomorrow, and I really hope that she was gracious about the nail stuff at least. (Though knowing her, she wouldn’t have dreamed of being ungracious. She’ll just take her irritation out on me.)

So, I am really hoping that vacation together goes well. There shouldn’t be a ton of distractions around if I keep her phone out of her grasp. Her friends are all with their own families at the moment. I’ve got a whole list of baking we can do together and of course there are also errands to be run that she should enjoy well enough.

Have a wonderful christmas morning!