Oh my good goodness, did I ever work through some hidden stash yesterday!

I got started at that drum carder, and 8 hours later I had made my way through almost 2 pounds of wool. 2 pounds! That’s nutty. Here’s what I made. 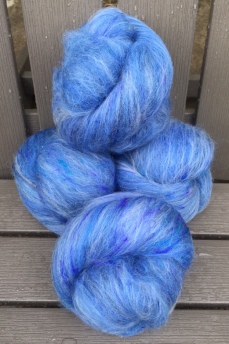 In these two, I used the same blue base for both sets and toned one blue and light, and the other I toned black and dark. 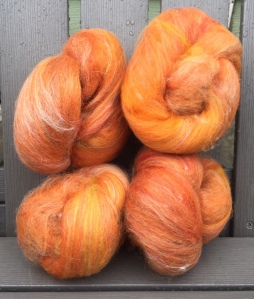 Despite the fact that it looks like both these sets are orange, they aren’t. The set on the left I began with a yellow base, adding pink and hot pink to the orange looking ones, and blue tones to the green looking ones. That’ll be a combo spin. Then the set on the right is an actual orange color combo with reds and rusts.

I loved this set quite a lot. I took a coral color base and then added a whole mess of pink to it, with some rich teal green as well. I think these will be a blast to spin.

And then for my last trick, I took an emerald green dyed over a grey natural wool, added a whole mess of different color greens toning toward olive, added a pop of brown bamboo, and called it good.

Each set is over 4 ounces, some more than others. Each set has various amounts of silk, bamboo, and other various add-ins so they’ll be totally interesting to spin.

So, now I have almost 2 more pounds of wool in my stash to work with, in batt form. Add to that the 10 ounces that made it in there yesterday after dyeing and drying. Previous to this, I had a big pink laundry like bin full of wool as well as a plastic storage bin. The storage bin is completely empty, and the laundry bin is somewhat light. Not packed full.

I decided to stop and put the drum carder away because I really would also like to create some rolags out of this. I do still have tons of base wool and tons of add-ins. But, I can’t really easily control the color on my drum carder, so I am looking forward to working on some rolags and creating something that’s a bit more gradient.

I really didn’t do any spinning yesterday, there really wasn’t time, and when I did sit down for a second, I decided I could knit a few rows.

Today is for the plumber and perhaps the zoo. We’ve been having some funny freak storms with a major downpour, but we are hoping that we can still enjoy the zoo all together anyhow. So, far less time to work on the destash. I think I can still get some done though.