On Saturday evening we had another system of storms roll through. Seems to be commonplace this summer. The first storm that rolled through was one of those storms that really dumped a ton of rain in a short amount of time. I’d been working on laundry throughout the day, and partway through that storm I headed to the basement to change out the laundry. You should know that we have an unfinished basement for this story. Anyhow, I headed down to the basement and immediately knew something was very wrong, as there was water running down the basement wall near my washer. I started yelling at Mr. Ink “Something is very wrong!” To which he felt that this was not quite enough information. But *I* hadn’t figured out what was going on yet either! Once I looked more closely, I realized that the downspout had popped off, and the water was running into the window well, and then leaking into the window and down the basement wall. Mr. Ink fixed the downspout in the pouring rain, while Miss Butterfly and I grabbed everything in the basement that might possibly get wet and moved it, while also grabbing newly dried towels from the dryer to sop up the incoming water. The basement window looked like a fishbowl, so full of water it was.

We had another unusual experience in that rain. Looks like the rain was so heavy (we had an actual creek in our yard.) that it drowned a gopher from the front bank on the neighbor’s property, washing him out into the street and then into our driveway. That’s a new experience for us. I bet the neighbors are pleased though, they’ve been trying to rid themselves of gophers for the entire time we’ve lived there.

The next morning I was a little bit concerned about the amount of rain we’d had, 2 inches, considering the 50 mile gravel ride we’d had planned. I took pictures! One of my goals for this ride was to have enough gear, but not too much gear. For those of you who are new here, I purchased this steel bike very cheap in 2013 explicitly to ride gravel, with the intention of upgrading my rig if necessary. But, the bike has worked quite well for me and I haven’t felt an overwhelming urge to upgrade. I decided to take two bags, the one under the seat and the one on my handlebars. Under the seat is everything I’d need in case of a flat tire, wallet, and car key. The handlebar has my inhaler, sunscreen, a protein bar, and a bandana. I kept my phone in a pocket on my bike shorts.  I took two water bottles, one filled with water and the other poweraid. I decided with a potential convenience store stop, I wouldn’t need a camelback. Here’s how I set out. Since I typically ride with a loudly floral patterned market bag, this was a great reduction in gear.

Before we headed out, my riding partner was asking me if I’d ever considered taking my fat bike out on gravel, and I told him that I hadn’t, as hills always kill me on the fat bike, and I didn’t think I could go very far. As soon as we hit the gravel, I realized in this one case, the fat bike might have been my better choice. My skinny tires sunk into the soft gravel and dirt, making it feel like I was riding with flat tires. Everything was squishy and sloggy and it made for a really rough start. But, there was no rain in the forecast, and I know gravel can really dry out quickly, so I decided to ignore what was initially happening in hopes of better gravel later in the day.

One of the things I’ve been trying to make a point of doing is taking photos on these rides. I get so focused on the ride itself that sometimes I forget to look up, enjoy the scenery, stop, and snap a photo when the sights are pretty. I still struggle to do it now. But, I did try yesterday.

The river is really swollen due to all the rain. On the other side of this bridge there were enough trees to make a dam I think.

I stopped to grab this photo on an uphill climb, it was too pretty to miss. 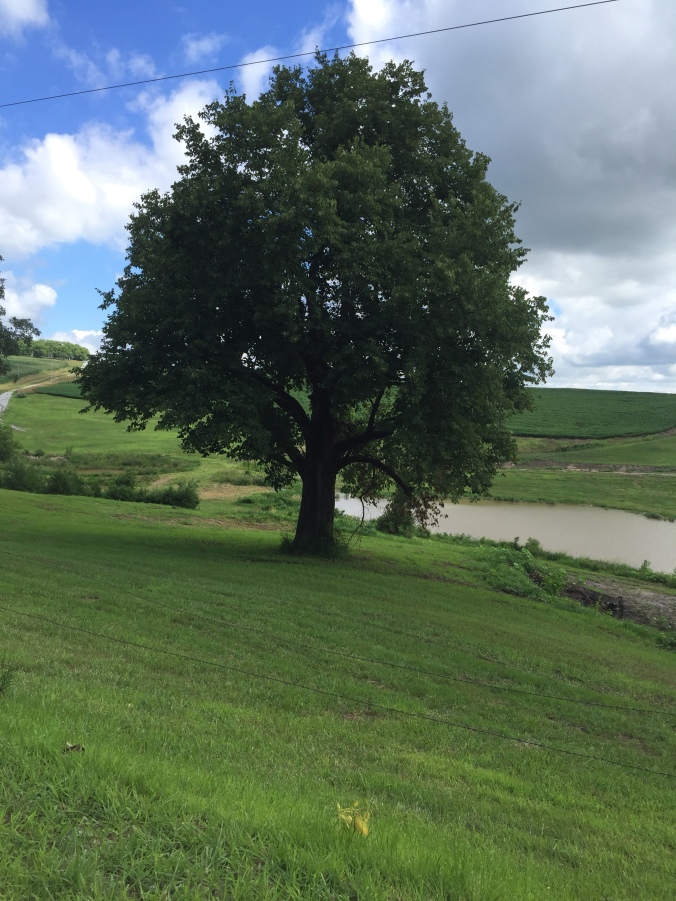 Do you see the gorgeous skies we had?

I snapped this photo while riding, as we rode this tiny portion of a crushed gravel trail. It was one of the few times my ride partner was close enough to grab a photo of.

He was running a pugsly but with 3 inch tires. He’s riding very strong this year and has already ridden across the state of Missouri on a week long bike ride. So, me catching up with him is pretty impossible. However, he stops and waits regularly and makes sure I don’t get lost so it works out. We are both introverts, and it’s one of the reasons I really enjoy riding with him. He doesn’t feel the need to stick by and chat with me, but I also know if something happens I’ve got an extra set of hands. (This may prove to be less true later in the day, but we’ll get to that.)

Anyhow, the route we were using was a route we’d both been on a few times before, but only at night. At mile 23, we didn’t think to reroute even though we both should have been able to think that through. Here’s where we still think we are ok:

Still a good looking road, if perhaps not as well maintained as it could be. We got to the bottom of that road and realized that was the point at which we were to head up a minimum maintenance road. We’d just ridden through a massive mud puddle already, and so we looked at it, kind of shrugged, and I snapped a photo as he rode away.

This was the beginning of my own personal hell. I couldn’t ride. I never did get to ride. I snapped a photo quickly as I realized why.

The mud was so thick it gummed up between my tires and fenders and my tire couldn’t move. It gets SO MUCH worse than this. Because this was the beginning. Soon I could not push my bike. Both fenders were packed with mud and gunk, and it collected all around the brakes as well. I had to carry my bike. You read that right. I had to carry my 32 pound bike plus gear plus mud a mile. And the entire time the road was so slick with mud my shoes were completely covered, while the weeds were knee high, and every time I stopped to rest the mosquitoes would come out for a snack. Ugh.

I rather wondered why I hadn’t seen my ride partner in ages, I did think he would have come back to help. When I was in sight, he said “Not much further now!” And I set my bike down completely exhausted. He came down the hill to grab my bike and said “And this is exactly where I had to start carrying my bike as my back wheel wouldn’t move anymore!” With barely controlled fury, I managed in between my huffing and puffing and trying to breathe “I haven’t been able to ride my bike or roll it since the start. My wheels have not worked since I got on that road. I have just carried my bike the entire way.”

Here’s a shot of my shoes after I plopped down in the grass. I decided I was done, and I am not sure I could get my bike running again anyhow with the mess that was on it. I called Mr. Ink for a pick up, which he agreed to. My ride partner scraped his bike and shoes off enough to get going again, and managed to complete the ride. I want to say that I need top stop biting off more than I can chew this year. However, I do believe I would have gotten much farther if we’d rerouted around the MMR. I’d been doing ok up until that point. Also, this is the last time I fail to bring a camelback. Just….ride with the camelback. It’s just better that way.

Mr. Ink picked me up in a car with very little fuel left. I questioned him on this, as we were really in the middle of nowhere. He said “Well, I didn’t expect it to be this far out, we are a REALLY long way away from anywhere! I didn’t realize how far away you were!” I was like “Try getting there by bike.”

I can say that my mood hadn’t yet lifted. But, we were able to get back without running out of fuel. Once home I decided to make lunch first. Then I hosed myself down, and my shoes down, and then the bike down. That was a challenge. It took me a very long time and a whole lot of water to get the mud off that bike, and even with the water, I had to dig that mud out from between the wheels and the fenders with my fingers. Now I need to assess the bike before Saturday night’s gravel ride, as I am not sure my fenders and brakes are straight. I’ll put that on Wednesday’s list.

I also drank a quart sized mason jar of decaf iced tea, and a liter bottle of sparkling water. Then headed for the shower where I scrubbed properly to reduce the risk of poison ivy. Once cleaned up, I slathered the sunburned areas with aloe, and decided to relax. I avoided the nap I desperately wanted, as I wanted to be able to sleep last night. So, I worked on some spinning and some knitting, and worked HARD on my relaxing. The dog was happy to help out, as she really wanted to be sitting on my lap due to the fireworks. I was perfectly ok with that plan of hers.

All in all, the ride was lovely, discounting the time spent carrying my bike. And it was an amazing work out. The day started off quite a bit cooler than we’ve had lately, and cloudy. The humidity was high, but as long as we were moving, it made for a pleasant breeze. Once the clouds wore off, the sky was the perfect shade of bright blue, though much warmer in the sunshine. I was sad to have to quit before I completed the ride, but I can  honestly say that even if the conditions for next week’s ride are not ideal, I’ll be FINE with the 25 mile route, as I fairly easily did 25 miles yesterday in not very ideal conditions.

And that’s it from here today! Have a great week everyone….