It’s no longer TdF, but progress is still being made.

By the end of Sunday, last day of TdF, I was indeed able to finish a third bobbin of singles.

They really are exceedingly good looking singles! There’s such a varying degree of color in those locks, it’s quite surprising.

Naturally, I got straight to the plying of these, since that’s a lot of singles and I am out of bobbins.

I then had to spin a little more as I had one empty bobbin and two quite full still bobbins. I plied that as well yesterday but didn’t have an opportunity to wash or count yardage on that skein. This left me with just over 5 ounces of locks to spin, which I will start tonight. I’ve divided them out between 3 bags in order to attempt to spin approximately equal lengths of singles. This project is so close to being done now, it’ll certainly be done by next weekend.

The best part, really, of TdF was concentrating so hard on specific projects that I didn’t really think about work too awfully much during my days off. I mean, I was busy anyhow, with Miss Butterfly home and those associated activities I took time off for, but in my spare time, I spun. And that was lovely and relaxing. I was also able to catch up on all my podcasts and audiobooks which had been languishing and taking up space in my poor old phone for far too long.

It’s the strangest thing really, having focused on spinning so much this month. I have a hard time even mustering the desire to knit. However, I do think I’ll take a break after this project and get back to some knitting. My goal of spinning only half of the amount I knit has been so blown out of the water by this secret fiber stash declutter! But with a sweater on the needles and a partially finished large scarf, I should be able to finish up those two projects and be pretty well on my way to balancing that back out.

I’ve uploaded a few other photos but never got around to posting them. 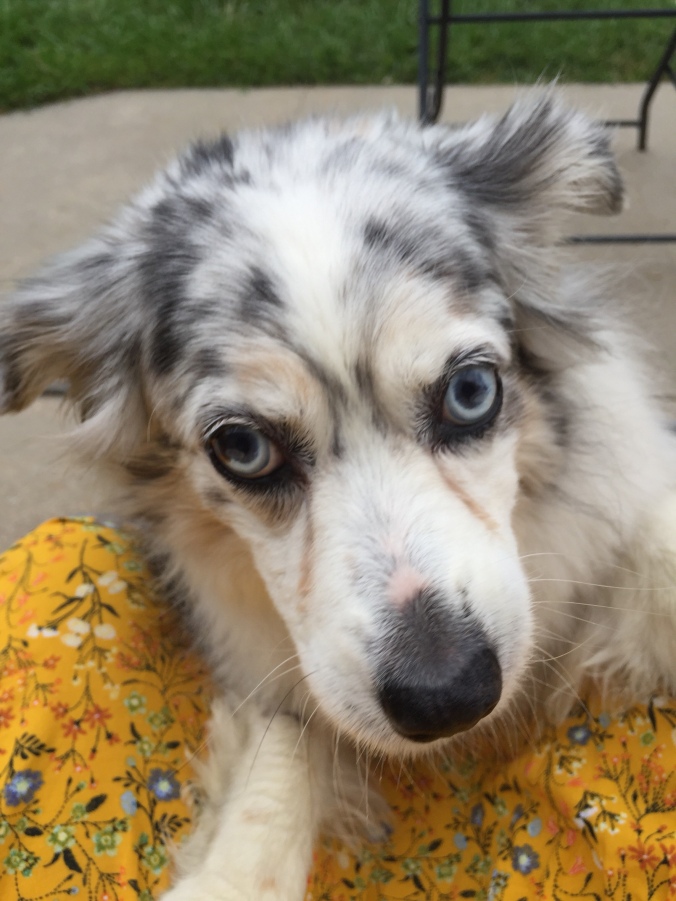 Here’s Lizzie. I took this photo while we were waiting on Miss Butterfly’s plane to land, and joked with her that this was Lizzie waiting for Miss Butterfly to get home. But, that disappointed look is actually Lizzie complaining to me that she’d just broken the squeaker in her favorite toy, and shouldn’t I DO something about it?!

And then there’s this lovely velvety thing:

I’ve refrained from posting about this because we’ve had such a difficult spring/summer. Back in May, we were in Alabama on mother’s day weekend for the wedding. I’d been telling Mr. Ink for AGES that I wanted a red rose planted in front of our white shop. I thought the bright red and green would look lovely against the backdrop of the shop, and every time he would explain to me what he wanted to plant in that spot I’d stop him and say “No, I want a red rose in front of the white shop.” So-upon my return from Alabama, Mr. Ink said: “I got you a mother’s day gift, come out and see.” And there was the red rose in front of the white shop. It struggled along in the heat wave, looking extremely stunned from it’s replanting, while almost all our other trees he’d planted this year around us died. Its blooms would open already dried out and crinkly. I worried about that rose, as we’ve lost others in years past. I didn’t want to take photos or get attached. But, it recovered, and it is looking amazing now! The foliage is green and healthy, no longer any sign of its earlier struggle, and the blooms are all large and smooth and velvety red! I think I can get attached now, I think this one is here to stay!

That’s all from me for today! I am back to work today and struggling through all of the associated catching up. Have a great one!

4 thoughts on “Decluttering the Secret Stash”