This’ll be a full post with no crafty content. It’s been busy this week. Miss Butterfly headed to HS for the first time yesterday, so we’ve been swamped with preparation. Knitting time has been very light. And I am exhausted.

Sunday Miss Butterfly and I went shopping, we spent a lot of time on that. In the end, we only got a few staple items so, despite the fact that we were out for so long, it wasn’t that exciting of a trip.

Then in the evening, we decided to do our nails. She wanted to choose something for school the next day. So I did her nails and then her toenails. I grabbed photos because I’d made her two bowls of ice water for her nails, but she didn’t tolerate this well at all. So here she is with her partly painted feet on my legs attempting to stick her hands in the ice water. 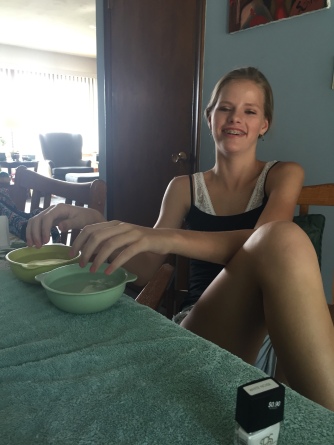 Despite being unable to sit still and unable to put her hands in the ice water, she didn’t ruin her manicure too badly. After two weeks of project polish, we decided we could let go of 3 nail polishes. The color and the formula weren’t great on all three. I don’t know if this is partly because they are old, or just cheap. But, no matter what, they weren’t for us and we were happy to let them go. Working on these projects with Miss Butterfly have been eye-opening to her. She’s ended up realizing that maybe collecting JUST to collect isn’t the best idea. She’s realized that you want products around that you actually desire to use and look forward to using. Forcing her to use the products she’s hoarding has made her realize hoarding products isn’t the best strategy. All three of the nail polishes we tossed on Sunday were her choice to toss.  I feel like even two weeks in we’ve managed to get more out of project polish than I expected to.

While we were doing our nails, Lizzie was under the table bored. Here’s what that looks like:

But, Miss Butterfly rectified this with lost of hide and seek, Lizzie’s favorite game. This is what Lizzie looks like when she’s playing games:

The moods of Lizzie are extreme.

Yesterday Miss Butterfly began school. Now, I’d taken time off at the end of July as it was absolutely required we check in and pick up her schedule. Yesterday morning Miss Butterfly couldn’t find her schedule, which caused us a quick panic until I found it on her desk where she’d stored it for safe keeping. She’d highlighted and color-coded her classes to make it easier to see which ones were this semester. Turns out, she didn’t need that schedule as they handed her a copy as she walked in the door. Since they did not indicate this may have been updated, she stuck to her original color-coded schedule.

She then indicated that she hadn’t been on the roster for a couple classes, and then I realized that I’d received unexcused absence notifications for a few classes. Turns out, she was following the wrong schedule. No harm done though, with her new class schedule, she gets 2 classes and a lunch with her best friend! Prior to this, she got no classes or lunch with her best friend.

That morning was pretty crazy too, she was clearly feeling anxious and this became clear when she had to apply eyeshadow for the third time, as the first two looks didn’t work for her. And, she changed her outfit twice. She was looking great as she was ready to head out the door though!

We had open house yesterday evening, so we did get to meet and touch base with the teachers she missed out on going to class with. When asked about her day, she said “Meh” but then proceeded to tell me all about it, and in particular about debate class. I met her (totally geeky and dad jokey) debate teacher, and he loved how she laughed at all his jokes. Apparently, she was the only one. She’s in a class with only 4 freshmen, the rest are upperclassmen, so it’ll be an interesting class for her. One of the other freshmen is a new gal, so she’s decided she’ll align herself with the new gal right from the start.

For me, I did manage to finish flick carding all that wool this weekend. It was a dirty dusty job, but one I was super happy to complete. Now I have two bags of flick carded locks in the living room, and three bags of dyed top divided out for a 3 ply in my living room. I am going to have to break out the wheel again soon!

I am also getting pretty close to being done with the shawl I just picked up again. The rows are super long now though, so it feels like it is slowing down significantly. I hope to have it finished and blocking this weekend.

It all feels like it’s part of the start of school like we are working our way into a season change as well. Even though it’s still hot and in the middle of summer. We’ve started another puzzle and the games have come off the shelves. I guess we are all thinking our way into autumn.

Have a great week!