It’s been tough finding blogging time when work is insanely busy and we’re spending evenings busy as well. Add in a new dog to that and no blogging time has been found at all!

Let’s start with knitting-over the weekend I worked really hard on my Brillig shawl. It’s easy to work on and fun to knit. It keeps me occupied without having to think too much about it. I can watch the new dog and make sure she’s not destroying anything she shouldn’t be while also getting some knitting time in. I threw it on the lawn for a super quick photo Monday morning with the intention of getting a blog post up, and realized only after I got to work that I wasn’t going to have time to blog, and was in such a rush that I never even moved the water hose from the photo. Ah well, this is a description of my life right now.

I really enjoy this knit. It’s at work now since I wanted something that didn’t need weighing partway through at work. But, I am kind of bummed it’s not at home and I can’t really work on it all the time.

In dog news, here’s a report. On Saturday Mr. Ink decided to take them both to the dog park so I could get some rest. I’ve been up early with them each day while Rose adjusts to her new life, and I was exhausted. He thought he’d take them to the dog park so I could nap. Doesn’t this sound like life with kids? For us, it’s our life with “kids” I suppose.

Now, we weren’t sure how Rose would do at the dog park. We’d been told to keep our various activities low for the first two weeks while Rose, a timid dog, adjusts to her new situation. However, we also felt like she was missing playing with other dogs and needed an opportunity to RUN! So, Mr. Ink thought he’d try, and it worked beautifully. He found that indeed Rose needed a place to run like crazy and play with other dogs and she had a wonderful time there.

That went so well that on Sunday we decided to take her swimming. This is a one day a year event where the local water park is closing for the winter season and allows dogs in. It’s crowded and nutty, but also good fun. The rescue where we got both dogs was going to be there with a booth. We figured we’d try it, and if Rose dissolved into a puddle of anxiety we’d just go home. After all, it’s not necessarily Lizzie’s favorite event. But, Rose did NOT dissolve into a puddle, she did exactly what she did at the dog park. She ran, she played with other dogs, she greeted people she didn’t know without any nervousness (that’s a big deal!) and she conquered quite a few fears. 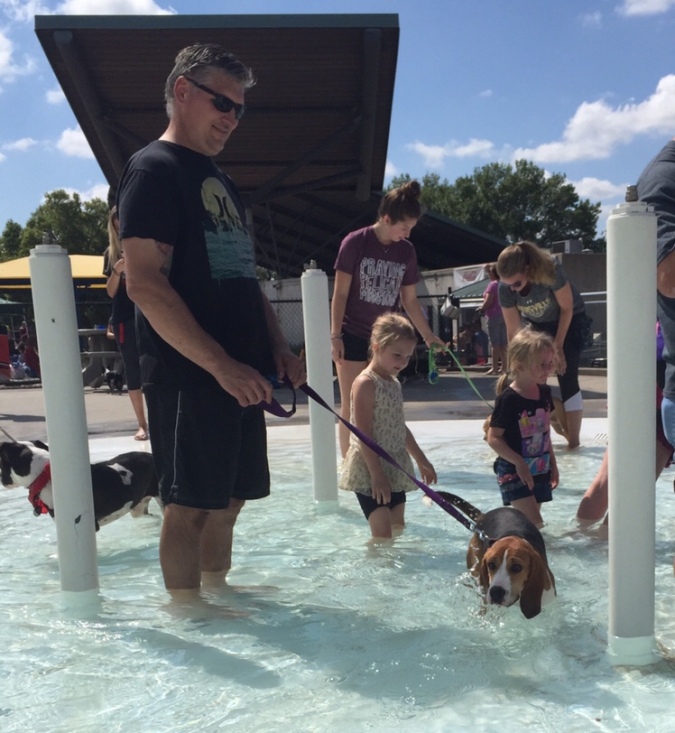 Here she is conquering her fear of the kiddy pool area. There were too many noises coming from here for her to want to go in, so she wouldn’t. Mr. Ink forced the issue, and then after that, she decided the water was fine and chose to run through it while running around. She also took it upon herself to go down the kiddy slide into the pool! She’s got adventure dog in her, we just have to bring it out.

Monday evening was the local botanical garden dog walk we try to get to once or twice a month. Now, leash walking is NOT Rose’s strong point right now. We’ve got her signed up for training which starts at the end of the month, but we are so entirely NOT there yet! But we went even so because the dogs needed a good walk, and she maneuvered that event really well too! 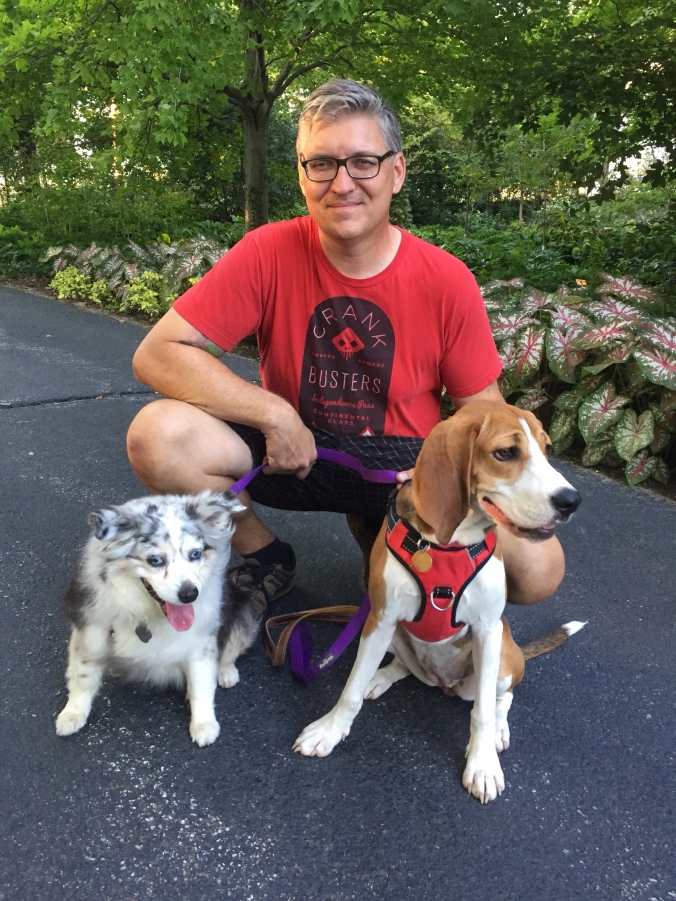 Here’s my family, all except the teen since she didn’t want to come along.

Lizzie and Rose are getting along much better than they did at the start. Lizzie is showing signs she MIGHT want to play when they are together outside and Rose is trying to engage her in it. She has begun to do so in fits and starts, those times being short lived as she gets overwhelmed. Lizzie is the mama dog and has realized that it doesn’t take too much to get Rose to behave. So, when she spots Rose doing something she doesn’t like, she makes sure to correct her. If Rose won’t lay down nicely at meal time, Lizzie pops her head out from under the table and puts her open mouth on Rose’s jaw. Rose complies. When Rose tries to be in the kitchen while Mr. Ink is cooking, Lizzie herds her back out and gives her a stern talking to.

And then there’s the one that is driving us a little nuts. When Mr. Ink comes in from outdoors, Rose will bark at him. Lizzie will then bark at Rose and correct her. She’s telling Rose “We don’t bark at dad!” But it really makes Lizzie mad, so she keeps barking. Which annoys us. So, that’s a behavior we are all trying to get back under control.

Rose looks to, and leans on, Lizzie for her confidence. Here they are riding in the car. Eventually Rose leaned in on Lizzie so much that Lizzie had to sit on top of Rose to get a spot to place her bum. 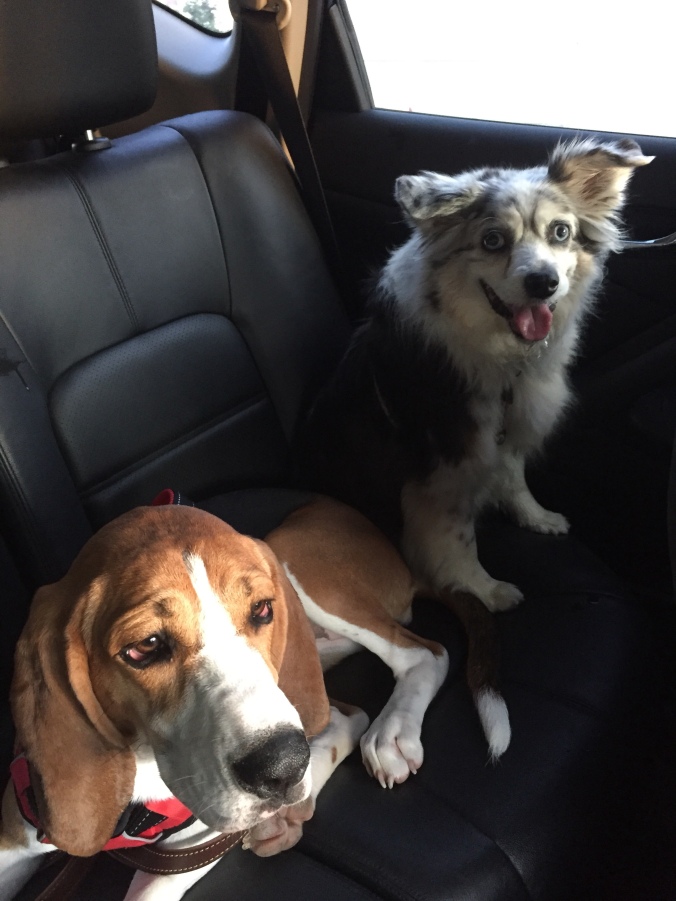 I think this picture also shows the personalities of these two exactly. Lizzie is the all in adventure dog. She wants to go wherever we go and do whatever we do, and she will do all of this with amazing confidence and joy. She’s a completely joyful dog. Rose is always concerned. A little concerned about people, about situations, about noises. She’s just a little bit concerned about the world, and a little skeptical of it. The wrinkly hound dog face and droopy eyes and ears really showcases that part of her personality in photos. But truly, her confidence is boosted by Lizzie and getting better each day. I read that sometimes dogs who are nervous about new situations and not exposed to them while young tend to never lose that fear as adult dogs. We are hoping we got her young enough to counter that, and we’ll just keep working on her now that we have her.

Last evening Miss Butterfly and I had a pretty full after work/school schedule. I took her to get a haircut, and then we had parent/teacher conferences. Mr. Ink was left with the dog care, and when we got home he was feeding them. They’d been kenneled longer than normal, so they were a little nutty. Lizzie got so excited to see us that she ran over Rose’s food bowl, spewing 2 cups of puppy chow all over the kitchen and scaring Rose who ran off to hide. So, we walked into quite a mess. We decided that after they ate, the best thing to do would be to take them to the dog park again. So we did, and Rose got to run and run and run and play. And Lizzie got to sniff things and eat grass.

I am really hoping that after 4 days of dog adventures these pups will allow us to stay home and just have a long walk tonight. I am exhausted!