We are talking wedding again, since with just over 2 months to plan it really is the top of everyone’s brain around here.

I’d been trying to figure out wedding favors. I’d thought about live succulents since that’s SO us, but since the vast majority of the attendees are traveling, that’s just not practical. I’d thought about seed packets. Then I thought about coasters, wooden ones, and Mr. Ink and I had kind of agreed on that. But I worried that the time between knowing how many we’d need and the wedding itself was just too short, I didn’t feel confident. I thought about a thousand other little things.

Then I got an idea. It wasn’t initially fully fledged, I just thought “Let me give this a try, knit up some prototypes, see what happens.” And, I knit up prototypes and I liked doing it. Then I ran it by my maid of honor, Miss Marja. She thought it was a great idea. I knit a few more. I blocked them. Then, the final step. I asked Mr. Ink what he thought about them. He loved them!

And that’s the point where I knew this was going to be A Thing. Handknit coasters as wedding favors. It’s just as kitschy and eclectic and non-traditional as the wedding itself. And here are the first 9: 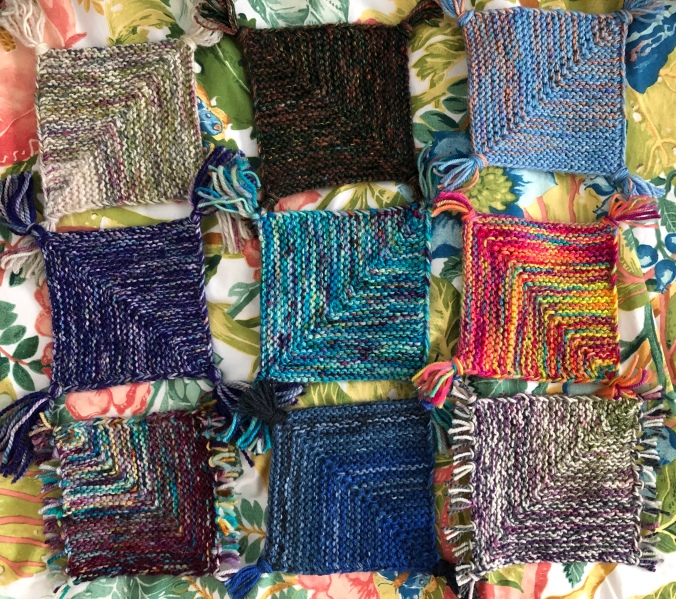 I am using scrap yarn and the pattern calls for it held double. This makes things fun because I can add in another color when one scrap runs out. I’ve got gobs of scrap yarn. Some of it is commercial sock weight yarn and some of it is handspun. And while this doesn’t help my year-long stash busting project on the surface, it sure does make a dent in the tiny bits hanging around that get irritating after awhile.

And surprisingly, I can say that after knitting 17 of these, I am still not bored. It’s a great project, and I am sure that being full of excitement over the wedding itself helps. But, there’s also the added benefit of a million different potential color combinations making this project so interesting. Be prepared to see a whole bunch more of these because we’ve only just begun! While I don’t technically need more than 30, I have it in mind to do about 40 so that I’ve got extra, people can really take their pick of favorite colors, and I can then have leftovers around the house after the fact.

Meanwhile, I’ll take you on this journey with me, since I’ve got loads more to do. Stay tuned, the next batch should be up this week.