Last evening we had a blizzard. We also had an 80s birthday party to attend. Mr. Ink and I had been excited about this party for months, and had been planning our costumes. My friend had rented a hall for the party and also she’d been preparing for months. And, on top of that, her father passed away last week after a prolonged 2 years of stroke recovery. I attended his funeral on Friday and Saturday’s party was to be a celebration and in my view, the closing of a difficult chapter of her life.

So, when we heard blizzard, we still really wanted to attend that party. The storm started with pouring rain right at around freezing. This was on top of two significant previous storms where we’d seen very little melt in between. Then it changed to sleet then snow. Mr. Ink and I continued to be positive we were going to get to that party. But after preparing, finishing my makeup, I didn’t get changed because my ability to view us leaving the house had waned.

Here’s a close up of my 80s makeup look. Mr. Ink had a great outfit up his sleeve too, but the priority was digging out of the driveway. I asked him in all seriousness, “Can we even get there?” I checked my email, and as I’d suspected, the party was still on. After all, my friend had out of town guests in and I knew she wasn’t going to get her money back for the food or the hall rental. Mr. Ink said. “We can.”

So we changed and headed out in the mess. In true to Mr. Ink fashion, in a good 4 wheel drive vehicle with the very good tires he keeps me in, Mr. Ink said “This is gonna be fun!” There were so few cars on the road that it actually was. We definitely didn’t feel like we were in danger simply because no one was out. We ended up 2.5 hours late to the party, but here we are: 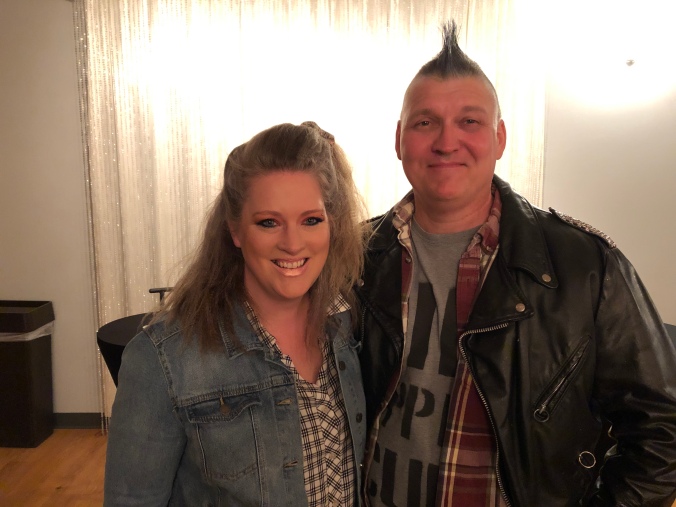 That’s right, I made Mr. Ink go as a punk. It’s his true self anyhow. He spray painted that shirt to say “Die yuppy scum” and dyed his mohawk blue, though it’s hard to see. Want a closer look?

We partied with maybe 12 people, dancing to 80s music until late into the night. I mean, we were already there, no rush to get home again.

All in all, our area got something like 10 inches of snow in 6 hours. With the wind, it caused about 1/3 of the state’s interstate system to close, most of it still closed today. The photos of those crashes are pretty gnarly. Thankfully, the venue for the party was just down the road from our house, there were no hills even to deal with. We were even able to easily get back into our driveway once we got home. It turned out to be a very fun evening, and I think my friend will find it a memorable birthday even though it completely didn’t go as expected.

Sadly, now Mr. Ink is in the bathroom shaving off that mohawk before digging us out again. I admit I would have loved to have him keep it for a few more days.