A. Week. That kind of week. The kind you don’t want a do-over of.

We had 3 days of heavy rain in a row with surprisingly warm temps. This caused the snow to also melt at an alarming rate. When I last spoke of basement flooding it had happened over the weekend. But, that wasn’t the last of it.

On Tuesday I went to work assuming all would be well. After all, we aleviated the issues with trenches for drainage dug into our lawn and filled with gravel. We built dams for the patio using large amounts of bubble wrap designed for heavy duty use and bricks. We moved everything to the highest point in the garage. Everything would be fine!

At lunchtime, Mr. Ink came home and everything was not fine. He called me and I left work immediately. We did more work on the inside and outside of the house. We were exhausted. But Mr. Ink stayed up until 1:30 in the morning, through a serious storm, so that he could keep an eye on the basement. Thankfully we had no issues.

So, I returned to work on Wednesday and worried about my basement all morning. Mr. Ink assured me that his work would hold and it would be fine. I told him that was good because I had my annual evaluation at 1 and shouldn’t miss it. He called at 12:30. The flooding in the basement was the worst it had been. I canceled my evaluation and headed home.

I worked all afternoon trying to remove the water from the basement. Mr. Ink again worked on the outside of the house. At one point we had an actual waterfall of water running down the basement wall. If you combine heavy rains, high temps, and 2 feet of snow in the yard melting (Not to mention the snow piles that were up to my waist) it’s bound to cause issues. That day, Mr. Ink actually moved the icy snow piles to the edges of the yard in hopes that it would help.

We continued moving things around in the basement, drying things off with towels and removing wet items from boxes. I was fortunate to not lose anything because everything that was mine in the basement was in plastic bins. But, this was not the case for Mr. Ink and Miss Butterfly.

Thursday morning I double checked the basement. We were leaking a bit but not at an alarming rate so I headed to work. Only to sit around and listen to rainstorms and worry once again. But at lunchtime Mr. Ink’s check in indicated that we were in the clear. So I managed to get a full day of work in.

After work, Miss Butterfly and I decided that since the basement was completely torn up but no longer leaking, it was time to do a basement clean out and reorganization. We moved furniture to new spots, did a major clean up of Miss Butterfly’s stuff, some of which was now for the trash, cleaned any areas of the floor that hadn’t been “washed” with incoming water, and put things away in a tidy manner. It’s nicer down there than it has been in a few years and while it was exhausting, I am so glad it got done. It was on my list of things to do this weekend so I feel a step ahead of the game.

I know that it is often underreported on major news channels but Nebraska and Iowa are really struggling right now with flooding. The rivers are continuing to rise, many towns are under water, dams and levys have been breached or failed, ice jams have been causing flash floods, many people are displaced, and first responders are risking their lives to rescue those who couldn’t make it out of their homes in time, most roads with bridges are closed due to rising flood waters and entire bridges have been swept away. While the weather has been dry, the rivers are continuing to rise, putting us in a precarious position. As such, I admit that while the basement flooding was a personal trial we had to endure, we are very grateful to live almost at the top of a hill in an area where our home isn’t in danger. We are so fortunate, it could be so much worse. And it is so much worse for so many.

So, I will try to zip my lips about my basement exhaustion and do some knitting this weekend. After all, my boneyard shawl made great progress because it’s the only thing I can manage to knit because it’s completely mindless! 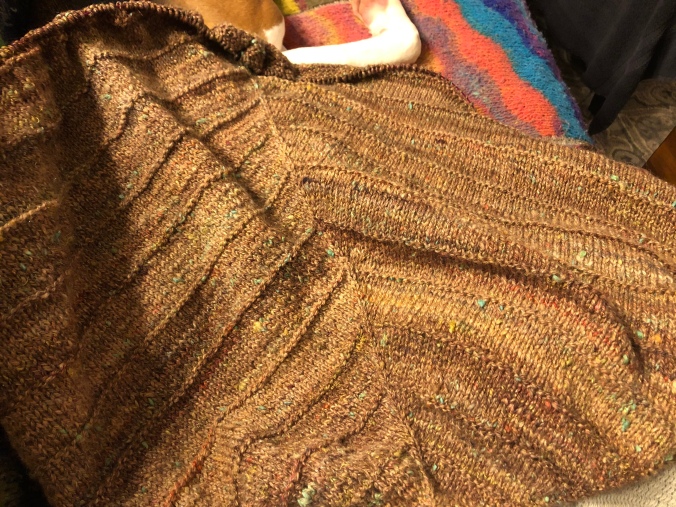